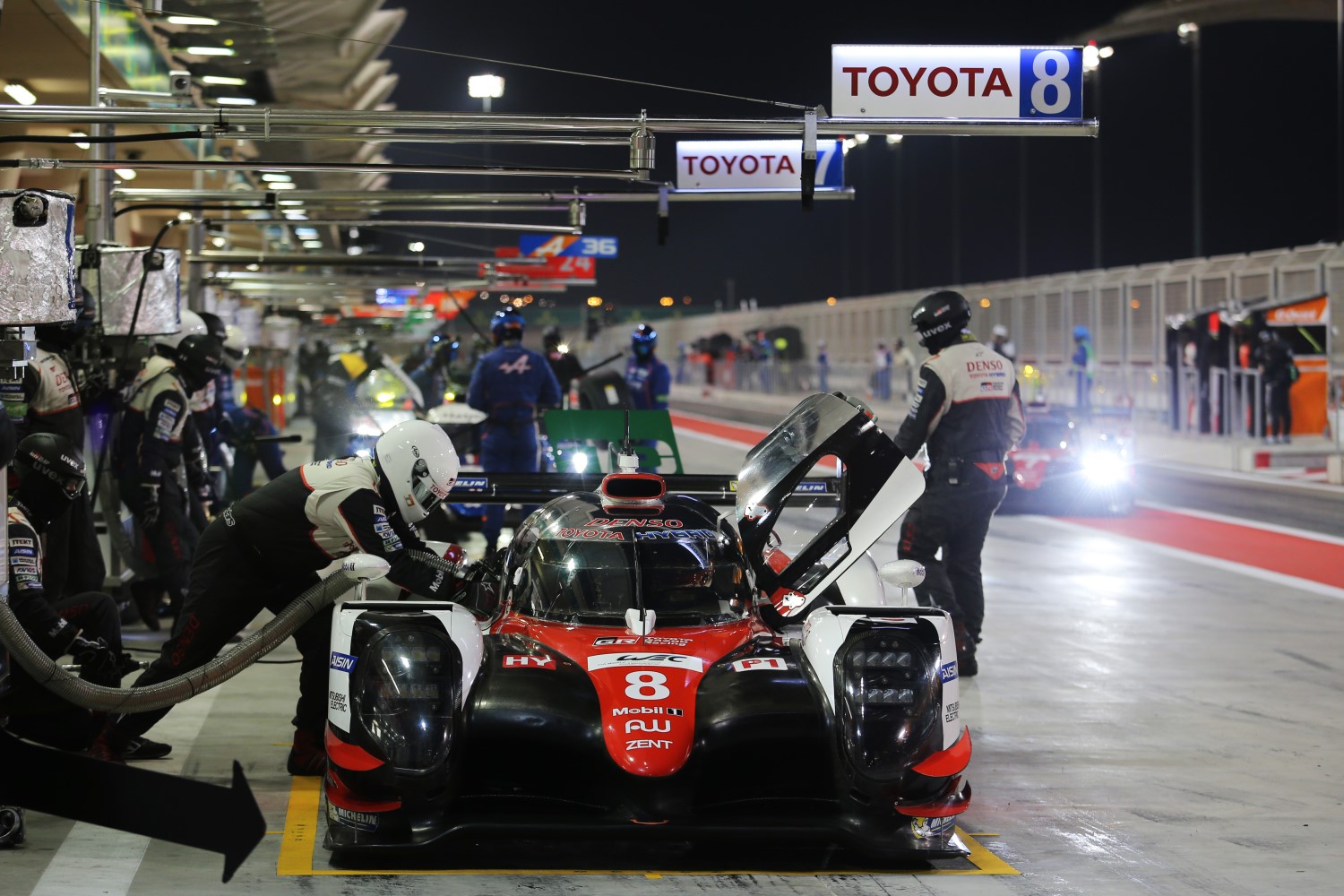 TOYOTA GAZOO Racing enjoyed a positive opening day of practice for the Bapco 6 Hours of Bahrain as it attempts to finish the 2017 FIA World Endurance Championship (WEC) season with a third consecutive victory.

Following wins in the last two races at Fuji and Shanghai, the team is targeting a fifth victory from nine races this season and began strongly at Bahrain International Circuit.

Sebastien Buemi, Anthony Davidson and Kazuki Nakajima in the #8 TS050 HYBRID set the fastest lap of the day, just 0.001secs slower than the best TOYOTA lap time ever with an LMP1 car in Bahrain

[adinserter name="GOOGLE AD"]The 6 Hours of Bahrain is not only the final race of the 2017 season; it is the last time for the foreseeable future that TOYOTA will compete against Porsche in LMP1.

The first practice session was interrupted for 37 minutes due to circuit repairs and cleaning. Later the 919 Hybrid of Jani/Lotterer/Tandy had to pit for quick repairs after a shortcut in a loom required fixing.

The second 90-minute session took place entirely in darkness in pleasant ambient temperatures of around 25 degrees Celsius. Shortly before the end of FP2, Bamber touched a LMP2 car but was able to drive back to the pits.

Therefore, TOYOTA GAZOO Racing targets a winning end to the four-year competition between the two manufacturers in the 50th WEC race since the series was re-launched in 2012. That meant everyone in the team was fully focused on fine-tuning the TS050 HYBRIDs when practice began today.

To boost its chances, the team has introduced detailed aerodynamic improvements to the cars and it evaluated these during the two 90-minute practice sessions, the first of which took place in afternoon sunshine.

Also on the agenda were set-up development and tire comparisons, with knowledge of tire degradation and performance a key issue because a set of Michelins must last for two stints in the race.

That program was compressed into a shorter time when a GT car spread oil over the circuit early in first practice, reducing the running time by 15 minutes, but the TS050 HYBRIDS nevertheless completed 71 laps between them.

Saturday’s race begins in daytime but will finish at 10pm, so in preparation today’s second practice took place in darkness, with air temperatures dropping from 29Â°C in the afternoon to 23Â°C at the end of the night’s action.

A trouble-free 90 minutes took place without interruption, allowing the team to successfully complete its full program and be ready to fight for pole position and victory.

Mike Conway (TS050 HYBRID #7): “That was a decent day for the team as we were fastest in both sessions. Our car needs to improve still in some areas and we are still deciding on tires and set-up. We improved the car from the first session and I think we can improve again tomorrow so we can hopefully fight again for pole."

Kamui Kobayashi (TS050 HYBRID #7): “Overall the car felt okay today so I am quite happy. As usual early in the week, we need to work more on the set-up to improve balance but I am pleased with our general performance. The lap times were quite encouraging so we will keep pushing on Friday and Saturday."

Jose MarÃ­a Lopez (TS050 HYBRID #7): “It was pretty good today. We look competitive but it’s very close so it’s going to be hard as always. For me, as with every race this year, I am trying to get on the pace quickly in my first time with an LMP1 car at this track. I was happy with my stints and I improved each time."

Sebastien Buemi (TS050 HYBRID #8): “It was a very good day for us; one of the best practice days we have had this year. We looked quick on short and long runs but there is a long way to go. We will analyze everything and try to get better. Our general pace seemed similar to Shanghai so I hope we can again fight for pole and the win."

Anthony Davidson (TS050 HYBRID #8): “I have always enjoyed this track and it’s nice to be fastest; our car always seems to suit this circuit. We did a lot of work, particularly with tires in second practice and that is very important here. There is a lot of data to study to get the tire choice right and I think we made good progress."

Kazuki Nakajima (TS050 HYBRID #8): “That was a good, productive day for our car and I am happy with the car balance. Porsche is still pretty close so we need to do everything right to come out on top in qualifying and, more importantly, the race. We can improve in some areas but it’s a strong start."