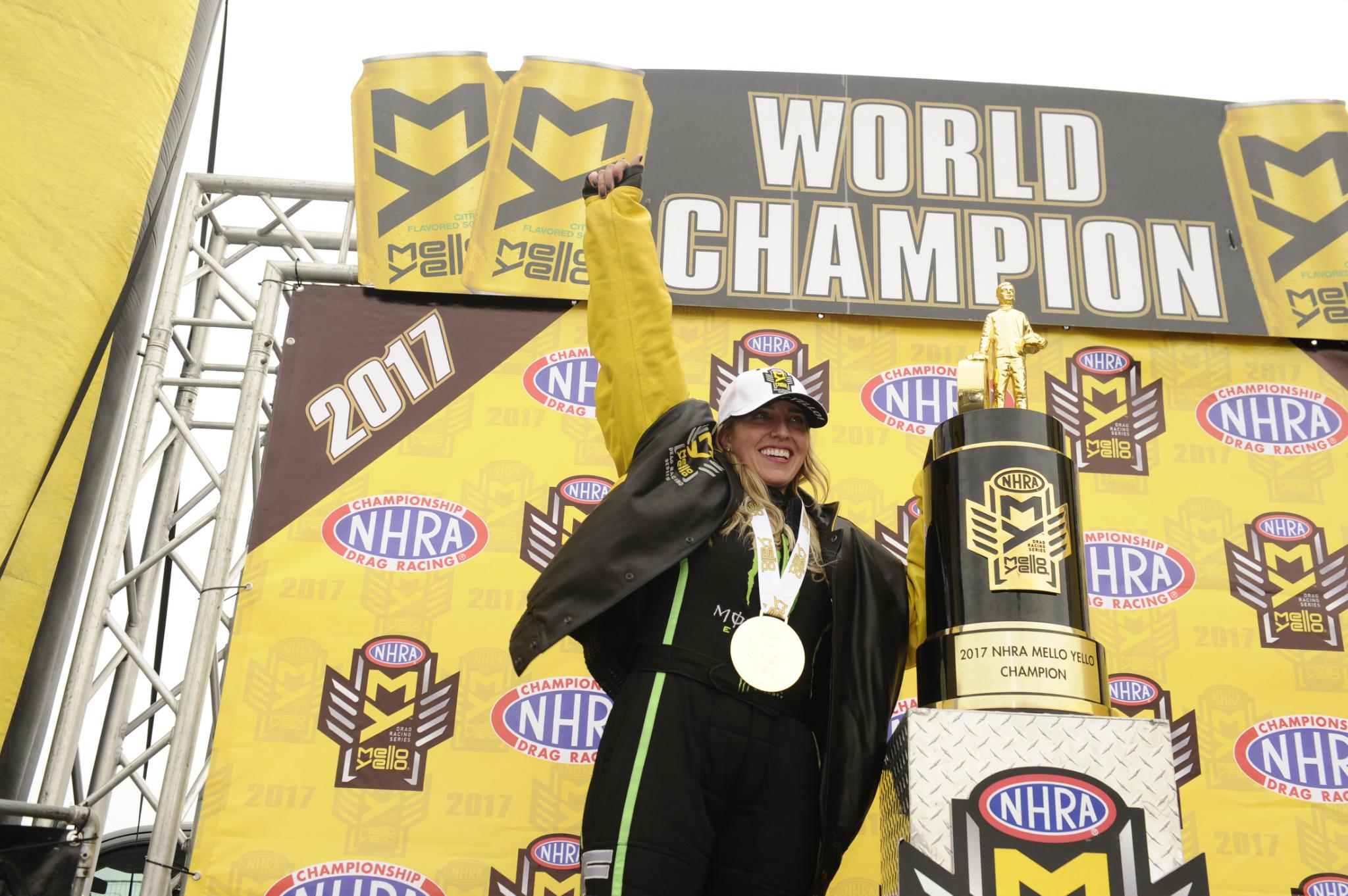 For the first time since 1982, a female has captured a NHRA Mello Yello Drag Racing Series Top Fuel world championship. Brittany Force clinched the category crown in the quarterfinals of eliminations Sunday at the Auto Club NHRA Finals at Auto Club Raceway at Pomona.

Force, daughter of 16-time Funny Car world champion John Force, became just the second female to win a Top Fuel world championship by piloting her Monster Energy dragster to a 3.679-second pass at 328.22 mph defeating Richie Crampton and his 3.757 pass at 323.81 in the quarterfinals. The other female to win a championship in the category was legendary racer Shirley Muldowney. Steve Torrence, who entered the race as the Top Fuel points leader, fell to 2016 world champion Antron Brown's 3.691 pass at 323.81 to guarantee the title crown to Force.

Force, who was also the No. 1 qualifier, raced to victory at the season ending event by defeating Shawn Langdon with a 3.668 pass at 330.07 when he smoked the tires in the final round. She finishes the season with four race wins, the first coming at the New England Nationals in Epping, N.H. Force went on to win three events in the NHRA Mello Yello Drag Racing Series Countdown to the Championship, the Dodge NHRA Nationals in Reading, Pa., the AAA Texas NHRA FallNationals and this weekend's season ending event. She has two runner-up finishes and two No. 1 qualifiers.

Hight powered his Auto Club of Southern California Chevrolet Camaro SS Funny Car to a 3.839-second pass at 332.51 mph to defeat Tim Wilkerson who smoked the tires at the starting line. Ron Capps, who was Hight's nearest championship contender, smoked the tires and lost to Del Worsham ensuring Hight the world title.

"Everybody worked their tail off and was quiet and knew they had a job to do," Hight said. "This is just huge for John Force Racing. For a couple of years, we have struggled but it is such a great group. We signed a long-term deal with Auto Club and they deserve better than what we were giving them. Jimmy Prock, Chris Cunningham (co-crew chief) they got us back in the game. It's been a long time and you want it so bad."

Hight's championship season had four race victories including two wins in the famed Western Swing and two victories during the NHRA Mello Yello Drag Racing Series Countdown to the Championship. He earned eight No. 1 qualifiers and had two runner-up finishes. At the event in Brainerd, Minn. Hight set the Funny Car national elapsed-time record with a 3.793 pass and in Sonoma, Calif. Hight went on to set the national speed record with a pass at 339.87. Hight closed out his 2017 season with a runner-up finish falling to Tommy Johnson Jr. in the final round.

Butner drove his Jim Butner's Auto Chevrolet Camaro to a 6.594 pass at 210.70 mph to defeat Tanner Gray's 6.653 run at 208.62 in the final round of the Auto Club NHRA Finals. Butner earned his first career victory at the NHRA SpringNationals in Houston earlier this year and ends the season with five event wins and six runner-up finishes.

"Just never give up. I have a great crew; it's amazing," Butner said. "They don't give up on me. But the KB team, what does that say about them? Honestly, I rent a car and a motor and they put me in a championship. It's just unbelievable. Thank the Lord for everything; He shined on me."

Butner took fate into his own hands when he defeated teammate Greg Anderson in the semifinals with a 6.551 pass at 210.05. Had Butner lost in the finals, Anderson would have won the world championship.

In Funny Car, Johnson Jr. raced to a 3.920 pass at 329.10 in his Make-A-Wish Dodge Charger R/T while Hight had trouble off the starting line. It was Jonson Jr.'s second win of the season, 17th of his career and second consecutive at Auto Club Raceway at Pomona.

Johnson Jr.'s path to victory included wins against Bob Bode, the retiring Alexis DeJoria and teammate and No. 1 qualifier Jack Beckman. Hight took out Tim Wilkerson, Matt Hagan and teammate Courtney Force and won the world championship before falling to Johnson Jr. in the finals.

Hines won the Pro Stock Motorcycle portion of the race to continue his streak of 14 consecutive seasons with at least one victory. He defeated teammate and newly crowned 2017 NHRA Mello Yello Drag Racing Series Pro Stock Motorcycle world champion Eddie Krawiec with a 6.856 pass at 196.02 on his Screamin' Eagle Vance & Hines Harley Davidson. Krawiec rode to a 6.930 run at 177.58.