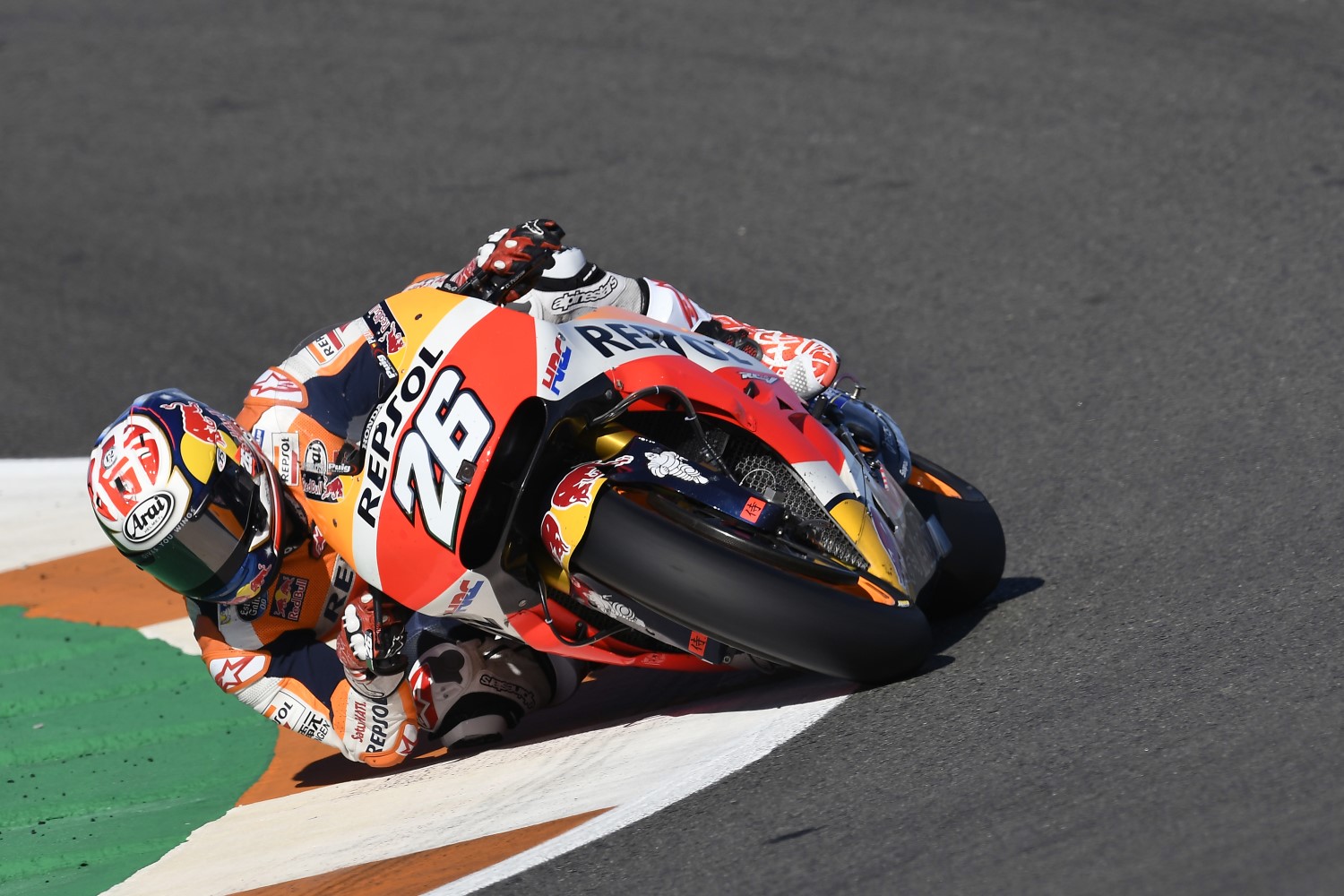 Marc Marquez (Repsol Honda Team) took his sixth world title and fourth MotoGP World Championship despite a huge front end moment into Turn 1 and a run off track, coming home third in the race to defend his MotoGP crown in Valencia. Title rival Andrea Dovizioso (Ducati Team) similarly suffered a run off from P4, but the Italian was unable to save it and sadly crashed out of contention in the race and Championship.

At the front, the race was a duel to the line between Repsol Honda Team’s Dani Pedrosa and Monster Yamaha Tech 3’s Johann Zarco – with the race decided in favor of the Spaniard on the final lap as Pedrosa pounced and defended to perfection for his second victory of the year.

Marquez got the holeshot from pole, with teammate Pedrosa slicing through from the second row to take over in second – and Zarco pushed down to third. Dovizioso made a good start to move up to sixth, then past Andrea Iannone (Team Suzuki Ecstar) and glued to the back of the second Ducati of Jorge Lorenzo.

[adinserter name="GOOGLE AD"]Early on, Zarco took over in the lead – with Marquez seeing him coming and slotting into second. Pedrosa remained in third, with the two Ducati machines glued together around a second behind and the tense tick of the clock counting down.

After a Zarco error, a Marquez pass and then the Frenchman hitting back, laps ticked down before Marquez struck for the lead – and ran wide. Sliding on his knee for a stunning save into Turn 1, the reigning Champion headed for the gravel – but managed to rejoin, yet behind Dovizioso.

Lorenzo then bolted to chase down Pedrosa and Zarco ahead, before the Ducati Team rider went down suddenly – and just as suddenly, the dream was over for his teammate. A run off into the gravel that couldn’t be saved saw Dovizioso’s title hopes disappear after a nevertheless stunning season to take the runner up spot.

Dani Pedrosa vs Johann Zarco was then the duel for the win, with Pedrosa initially attacking at the final corner but the Frenchman able to hit back. As the last lap dawned, the Spaniard tucked in and then pounced into Turn 1, managing to hold off Zarco around the tight Circuit Ricardo Tormo Circuit to take his second victory of the season.

Marquez, back into the podium places after the falls ahead, kept his calm to the end to take third and the title, making him the youngest ever six-time World Champion and the youngest to take four premier class Championships.

Alex Rins (Team Suzuki Ecstar) put in an impressive rookie ride into fourth, ahead of Valentino Rossi (Movistar Yamaha MotoGP) after a more difficult race for the ‘Doctor’. Iannone dropped back slightly after a run off at Turn 1 to take sixth, ahead of a great final race with EG 0,0 Marc VDS for Jack Miller in P7. Cal Crutchlow (LCR Honda) moved up after crashing out in Q1 and qualifying outside the top ten to cross the line in P8, with Michele Pirro (Ducati Team) putting in another solid wildcard appearance to come home in ninth. Tito Rabat (EG 0,0 Marc VDS) also impressed, locking out the top ten.

Bradley Smith (Red Bull KTM Factory Racing) rounded out the Austrian factory’s first season in the premier class in P11, and it was a tough weekend and final race of 2017 for third-placed in the Championship Maverick Vinales (Movistar Yamaha MotoGP), as the Spaniard came home in P12. Danilo Petrucci (Octo Pramac Racing), Karel Abraham (Pull&Bear Aspar Team) and Hector Barbera (Reale Avintia Racing) completed the points in the #FinalShowdown, with the dust settling around the dramatic final race as the flag flew.

Marc Marquez
I’m living a dream. ‘Six Titles’ are big words. The truth is that I’m incredibly happy because we worked so much this year, and today the race was incredibly tense and exciting—a bit ‘Marquez Style.’ I made a mistake, but I also made my best save of the year. From that moment on, I just tried to finish the race in a good position. I’m sorry that Andrea didn’t finish the race, as he deserved to do so. He had an incredible season and I would have liked to have him on the podium with me today. The key to the year has been our mentality. In our world it’s very important to remain positive and motivated during the difficult moments. Some things happened to us at the beginning of the season but when we found the way to sort things out, everything went better. Congratulations to Honda and the entire team for the Triple Crown. It’s an amazing achievement. Winning the Title at the last race of the season in front of our fans is one of the best things possible, really special. Now I want to enjoy this with my entire team and my family, and after that we’ll start to work for next year.

Dani Pedrosa
Obviously I’m very very happy because a win is a win, and this was a very tough and hard-fought one. Today we had a chance because we got a good start and the setup was working well, so we took it. The track wasn’t easy as front grip wasn’t perfect, and in fact we saw a lot of crashes in the race. I was just behind Marc when he made that save and it was incredible. The smoke, the noise, the speed—wow, impressive! I realized that the track had a limit, maybe because the rear had more grip, which pushed the front. Anyway, I tried to manage the front grip, but then in the last three laps I gave it everything to pass Johann. He was so good into the corners but finally I passed him on the last lap. I’m so happy to have won in front of my crowd, and I would like to dedicate this victory to my family, friends, fans, and the team. This was a fantastic day for all of us, as Marc clinched the Rider Title and we secured the Constructor and Team Titles. I also move up one place in the Championship, and that’s great as well.