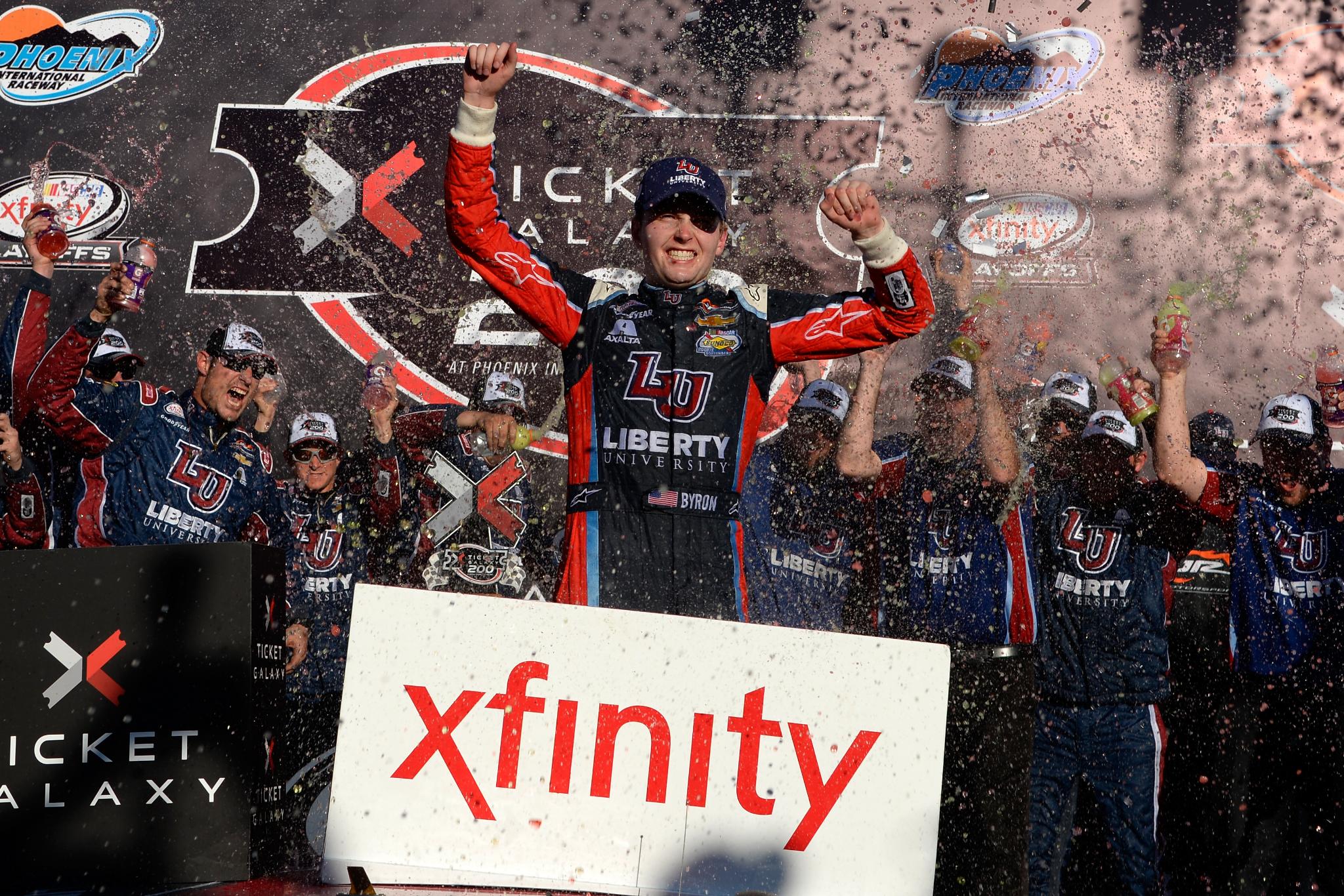 With a pickup pit crew, at the track that cost him a shot at the NASCAR Camping World Truck Series title last year, William Byron won Saturday's Ticket Galaxy 200 to advance to the Championship 4 race in the NASCAR XFINITY Series.

Behind him, JR Motorsports teammates Justin Allgaier and Elliott Sadler also qualified for the title race with finishes of 10th and 18th respectively. The JRM trio will join Daniel Hemric in an all-Chevrolet finale, after Hemric ran fifth and held off a valiant bid from Cole Custer after a restart with 13 laps left.

Byron took the lead off pit road after taking right-side tires only during a stop under caution on Lap 183 of 200. As Hemric, Erik Jones, Ryan Blaney, Christopher Bell and Custer battled behind him, Byron pulled away to beat Blaney to the finish line by .960 seconds.

"The second-to-last run of the race it took off on the long run," said Byron, who was knocked out of the Truck Series Playoff last year when his engine blew at Phoenix. "I got up to third, and we got the two tires on it, and we were able to stay up there.

"I felt like clean air was pretty important. The 20 (Jones), the 22 (Blaney) and us were really similar. Whoever was in third would lose distance to the front two after probably 20 or 30 laps. We just had to adjust on it and make sure we got it right for the last pit stop."

Jones ran fourth, followed by Bell and Hemric, who passed Custer on the final lap to claim the final spot in the Championship 4 by four points. Blake Koch also got past Custer on the way to the stripe to grab sixth place, and Custer rolled home seventh.

The JRM teams found out Saturday morning that their pit crews wouldn't make it to Phoenix in time for the race because their plane had been diverted to Little Rock, Ark., with a mechanical problem. That led to a scramble for crew members pieced together from Hendrick Motorsports development crews.

In Byron's case, the put-together crew proved up to the task. They got his No. 9 Chevrolet off pit road first after the final pit stop, though crew chief Dave Elenz said the two-tire call was dictated by the team's inability to jack the left side of car, a problem that had recurred throughout the race.

"The guys on the pit crew did an awesome job, to step in cold-turkey like that, not knowing that you're going to do it this morning," Byron said. "And then showing up and pitting the car in the Playoffs—that's pretty insane."

If Byron was relatively unconcerned with a makeshift crew, team owner Dale Earnhardt Jr. was more than mildly surprised.

"I freaked out when I heard it," Earnhardt said. "I was real surprised by that news, but I was assured that we had people here who could get in there and do the job, and to be honest with you, they did. Give those guys a lot of credit…

"I'm equally glad that our guys who had to land in Arkansas are safe, and we'll see them next weekend."

The major casualty of the race was Brennan Poole, who came to Phoenix fourth in the standings with a good chance to make the Championship 4. But Poole wrecked on Lap 22 while trying to drive to the inside of the lapped car of Caesar Bacarella, who was making his first XFINITY start.

"I saw (Bacarella) go in (to Turn 1), and we were going to kind of go to the top to go around him, and he slid up so I tried to go to the bottom," Poole said. "Bad luck, bad circumstances.

"I guess I could have been a little more cautious there, but just trying to get up there to get some stage points and keep moving forward."

None of the four drivers competing for the title next Saturday drives a car eligible for the owners' championship. The four cars running for the latter title are the No. 22 Ford of Team Penske, the Nos. 18 and 20 Toyotas of Joe Gibbs Racing and No. 42 Chevrolet of Chip Ganassi Racing.

All four cars have been driven by multiple drivers this season.

After the race, the no. 7 Chevrolet of Allgaier was found to have an unattached brake cooling hose in post-race inspection, resulting in an L1 penalty. The infraction did not affect the composition of the Championship 4, but Allgaier will lose the services of crew chief Jason Burdett for the season finale.