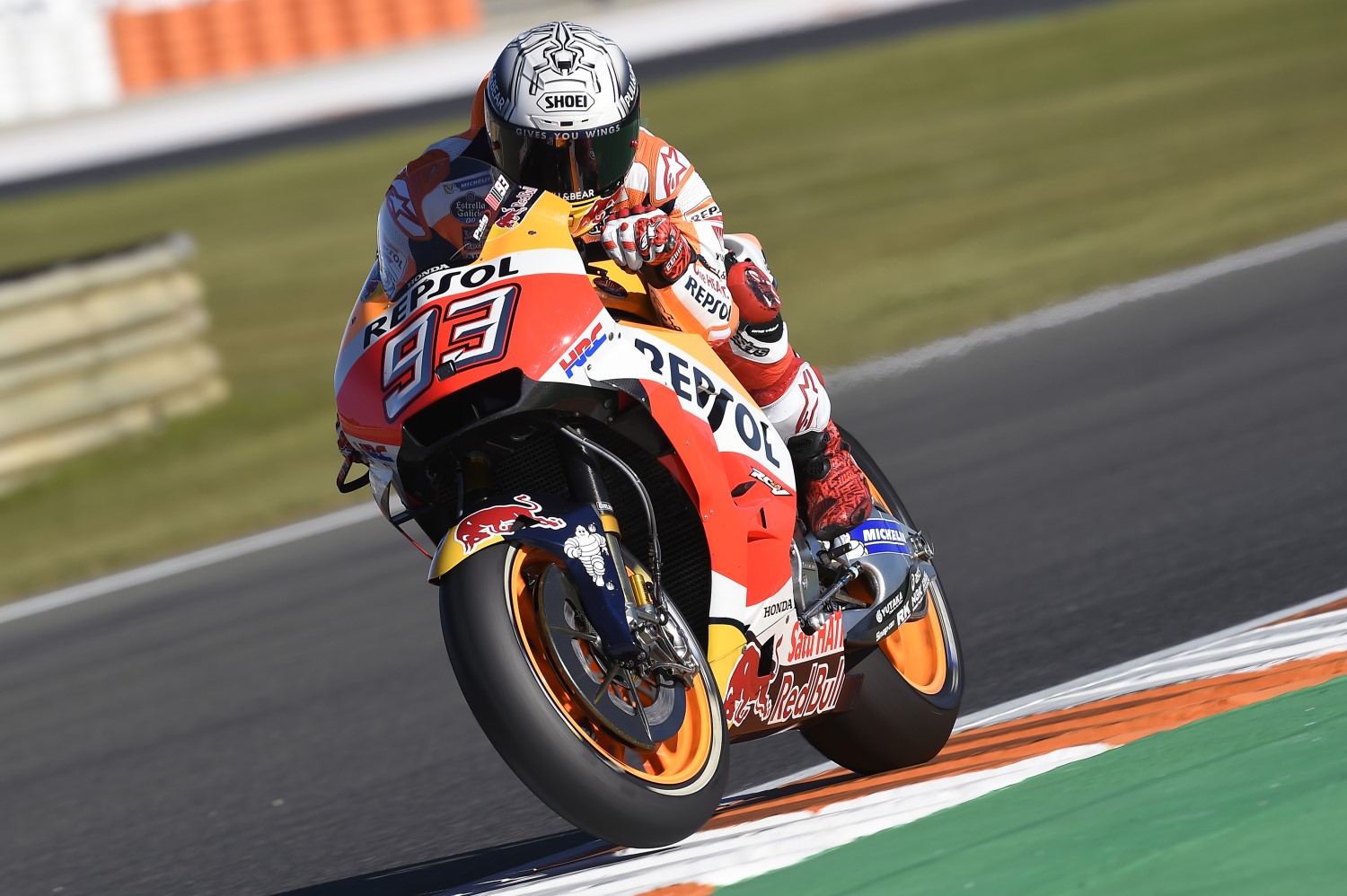 Marc Marquez today extended his career pole count to 73 (45 in MotoGP), with his eighth pole of the season in Valencia. Together, with the three claimed by teammate Dani Pedrosa, this brings the Repsol Honda Team’s tally to 11 pole positions in 2017.

After showing quick race pace and taking P1 in both FP3 and FP4 sessions, Marquez was the only rider able to dip under the 1’30 barrier in qualifying, setting a 1’29.897 that proved unbeatable by his opponents, even if the Spaniard suffered a crash in turn 4 during his second run, which prevented him from further improving on that time.

[adinserter name="GOOGLE AD"]Friday’s fastest Jorge Lorenzo (Ducati Team) heads up the second row after a fast crash when setting red sectors – rider ok – with the five-time World Champion only a tiny margin off a top three start at the venue where he holds the pole lap, race lap and most premier class wins records. The rider with the most victories at the circuit across all classes, Dani Pedrosa (Repsol Honda Team), is just behind Lorenzo in fifth after ending Day 1 in P2. Ducati Team test rider and wildcard Michele Pirro completes the second row.

Alex Rins (Team Suzuki Ecstar) completes the top ten, ahead of Q1 graduate Pol Espargaro (Red Bull KTM Factory Racing), who went eleventh fastest but will start from pitlane due to an engine penalty. Jack Miller (EG 0,0 Marc VDS) takes P12 and was another to crash in the session, moving one place forward on race day as Espargaro’s penalty shuffles the grid forward.

In the battle for the Top 12 on the grid, Jorge Lorenzo overstepped the mark at Turn 13 and had a heavy crash, escaping unharmed

That’s good news for Maverick Vinales (Movistar Yamaha MotoGP) after a tough day at the office for the rider from Roses, qualifying in P13 and gaining one place. He’s followed by Tito Rabat (EG 0,0 Marc VDS), with Danilo Petrucci (Octo Pramac Racing) and Q1 faller Cal Crutchlow (LCR Honda) completing the fastest sixteen and the top fifteen on the grid.

The #FinalShowdown is now ready to race, with the lights going out at 14:00 (GMT +1) on Sunday and the crown on the line.

Marc Marquez
I’m extremely happy that today we’ve achieved our goal of starting from the front row, as the start is very important at this track. I had a crash in qualifying that frustrated me for a bit, though only for a few minutes. The fact is that I did not feel totally comfortable with the front in turn 4 during my first flying lap, and when I told Santi (HernÃ¡ndez) before going out for my second run he told me to pay attention to this. I kept pushing because I knew that I had to do so if I wanted to be faster, but then I fell. As I said on Thursday, the ‘Marquez style’ will be okay until after the warm up, and that I want to work in the same way as always, pushing hard during the practices. The most important thing is that we’ve worked well all weekend and that we’ve got a good pace on used tires. For the race we must make a switch and change. We must see where Dovi is, where we can finish and do our best.