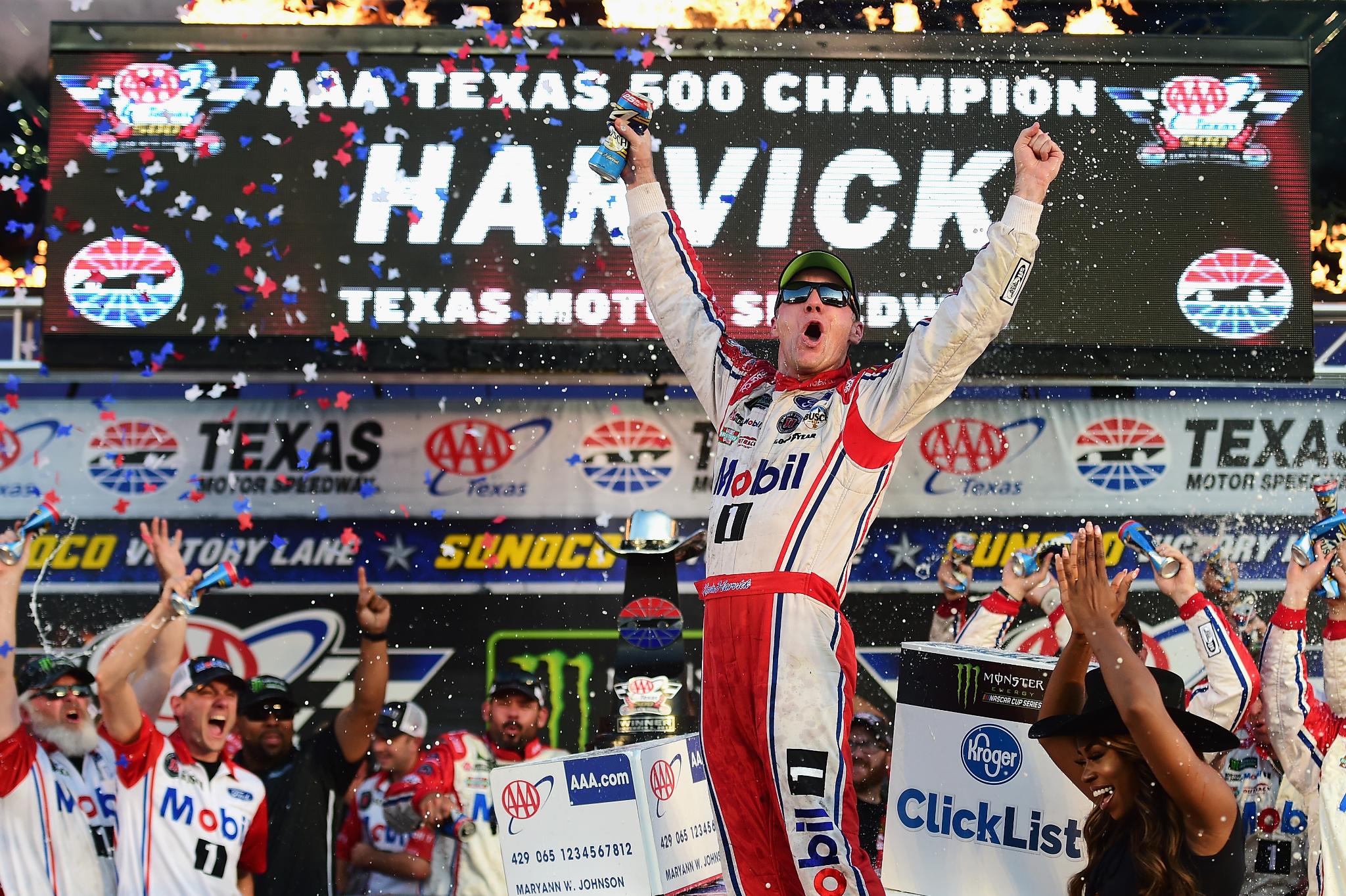 Kevin Harvick put a serious dent in Truex's sense of invulnerability on Sunday afternoon, passing Truex with nine laps left in the AAA Texas 500 at Texas Motor Speedway and pulling away to win by 1.580 seconds.

In beating this year's unrivaled master of the Monster Energy NASCAR Cup Series' 1.5-mile intermediate speedways, Harvick earned a spot in the Nov. 19 Championship 4 race at Homestead-Miami Speedway, which Harvick won the first title contested under an elimination format in 2014.

The driver of the No. 4 Stewart-Haas Racing Ford won for the first time at Texas, denying Truex the same accomplishment and ending Truex's streak of wins on intermediate tracks at four. The victory was Harvick's second of the season and the 37th of his career.

As consolation, Truex clinched a berth at Homestead on points, leaving Texas 57 points ahead of fifth-place finisher Brad Keselowski, who is fourth in the standings with a 19-point edge over fifth-place Denny Hamlin (third on Sunday).

"At the start of the race, our car wasn't very good," said Truex, who led a race-high 107 laps to bring his season total to 2,175. "Track position was a big part of this race. We fought the car. We fought track position. We got the lead, led some laps. Ultimately, at the end, we weren't as good as we needed to be to win.

"A little disappointed to come up short, but to clinch a spot in Miami is unbelievable. Definitely got the job done today and came here and did what we needed to do."

With Kyle Busch having earned his spot in the championship race by winning last Sunday at Martinsville, one berth remains as the series heads for the final race in the Round of 8 next Sunday at Phoenix.

After Kyle Larson clobbered the outside wall in Turn 2 on Lap 282 and ended his race in a fireball against the fence to cause the eighth and final caution of the event, Truex cleared then-race leader Hamlin off Turn 2 during a Lap 289 restart and pulled out to a half-second lead.

arvick grabbed fourth from Kasey Kahne after the restart, passed Joey Logano for third on Lap 300 and got past Hamlin for second on Lap 307. Then it was a matter of tracking down Truex.

On Lap 314 Harvick closed dramatically when Truex slowed behind a knot of lapped cars entering Turn 1. Hounding Truex for the next 10 circuits, Harvick finally made the pass on Lap 325 of 334.

"He got to my outside and was just faster at the end," Truex said. "Once he got in front of us, he was just gone. Nothing I could do. Just one of those deals where he was quicker. Got me in a bad spot, took advantage, and he was gone."

Veteran Matt Kenseth ran fourth, after saying this weekend he likely will step away from the sport at the end of the season, with no concrete job lined up for next year. Playoff driver Ryan Blaney ran sixth and heads to Phoenix sixth in the standings, three points behind Hamlin.

Hendrick Motorsports drivers Chase Elliott and Jimmie Johnson are mired in seventh and eighth places, respectively, almost certainly needing a victory at Phoenix to advance to the Championship 4. Elliott came home eighth at Texas. Johnson lost two laps early because of an unscheduled pit stop and finished 27th, three laps down, his hopes for a record eighth title suffering a telling blow.