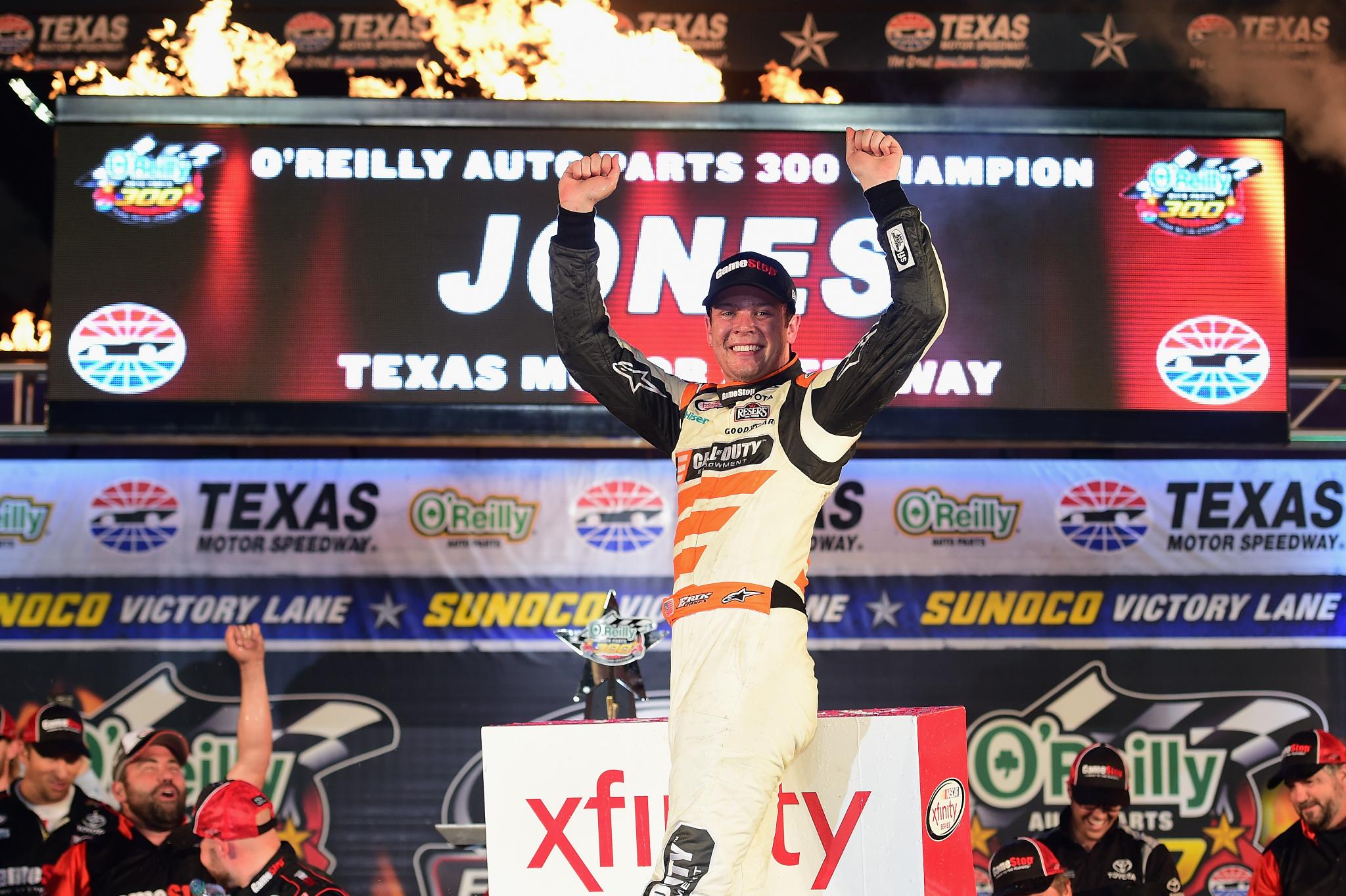 There was no keeping up with Erik Jones on Saturday night at Texas Motor Speedway – though Ryan Blaney tried his level best over the closing laps of the O'Reilly Auto Parts 300.

Jones, the pole winner, swept the first and second stages of the event, led 142-of-200 laps and completed the season sweep of NASCAR XFINITY Series races at the 1.5-mile track – the first time that's happened since Kyle Busch won both races in 2009.

The victory was Jones' third of the season, his third in six starts at TMS and the ninth of his career. Though the race was decisive in Jones' favor, it settled little with regard to the XFINITY Series Playoff, with no driver clinching a spot in the Championship 4 race at Homestead-Miami Speedway.

Regaining the lead after a cycle of green-flag pit stops, when Ty Dillon pulled onto pit road on Lap 192, Jones kept Blaney behind him the rest of the way and powered his No. 20 Joes Gibbs racing Toyota across the finish line 1.018 seconds ahead of Blaney's No. 22 Team Penske Ford.

After last year's fall race, the track was repaved. If anything, the new configuration made Jones even faster.

"It's sure been a good race track to me," Jones said. "On the old track and the repave now. It's just been a place I've enjoyed coming to. The first time I came here in a truck, I'll never forget, I never thought I'd like the place, and ever since then it's just kind of clicked for me.

"Just excited to get back to Victory Lane. It's been a few months since I've grabbed a win and the 20 guys have got a win, so happy to get them back here. They've brought fast cars for the last month, and we just haven't found Victory Lane, so cool to get back here again and just happy for these guys."

After Blaney made his last stop for fuel on Lap 185, and Jones pitted a lap later, Blaney trailed the race winner by less than a car length when they both regained top speed. Passing was another matter.

"It just stinks we couldn't get around him," said Blaney, who is in the thick of the battle for a Championship 4 spot in the Monster Energy NASCAR Cup Series. "I thought we had a shot after the green-flag stop. I thought we were way better, but we got held up a couple times by traffic.

[adinserter name="GOOGLE AD"] Kyle Larson came home third after two snafus on pit road cost him a chance to win. Under caution on Lap 92, after the end of the second stage, Larson came to pit road before it was open. Though he didn't stop for service, Larson lost positions when he blended back in line.

And after a stop on Lap 127, Larson had to return to pit road to allow his crew to tighten a loose lug nut. With the race going green to the finish after the subsequent restart on Lap 131, Larson ran out of time in his pursuit of the winner and runner-up.

"My car was really good tonight," Sadler said. "Erik and Blaney were so much better into (Turns) 1 and 2. They had it figured out. I've got to go to work before we come back here in the spring. But all in all, it was a great night for us."

Cole Custer finished fifth, recovering from a punctured tire that dropped him rapidly from his front-row starting position but the driver of the No. 00 Ford leaves Texas in sixth place, 13 points behind fourth-place Brennan Poole, with the Playoff field to be cut to the top four after next Saturday's race at Phoenix. Matt Tifft ran eighth and is fifth in the standings, five points behind Poole.