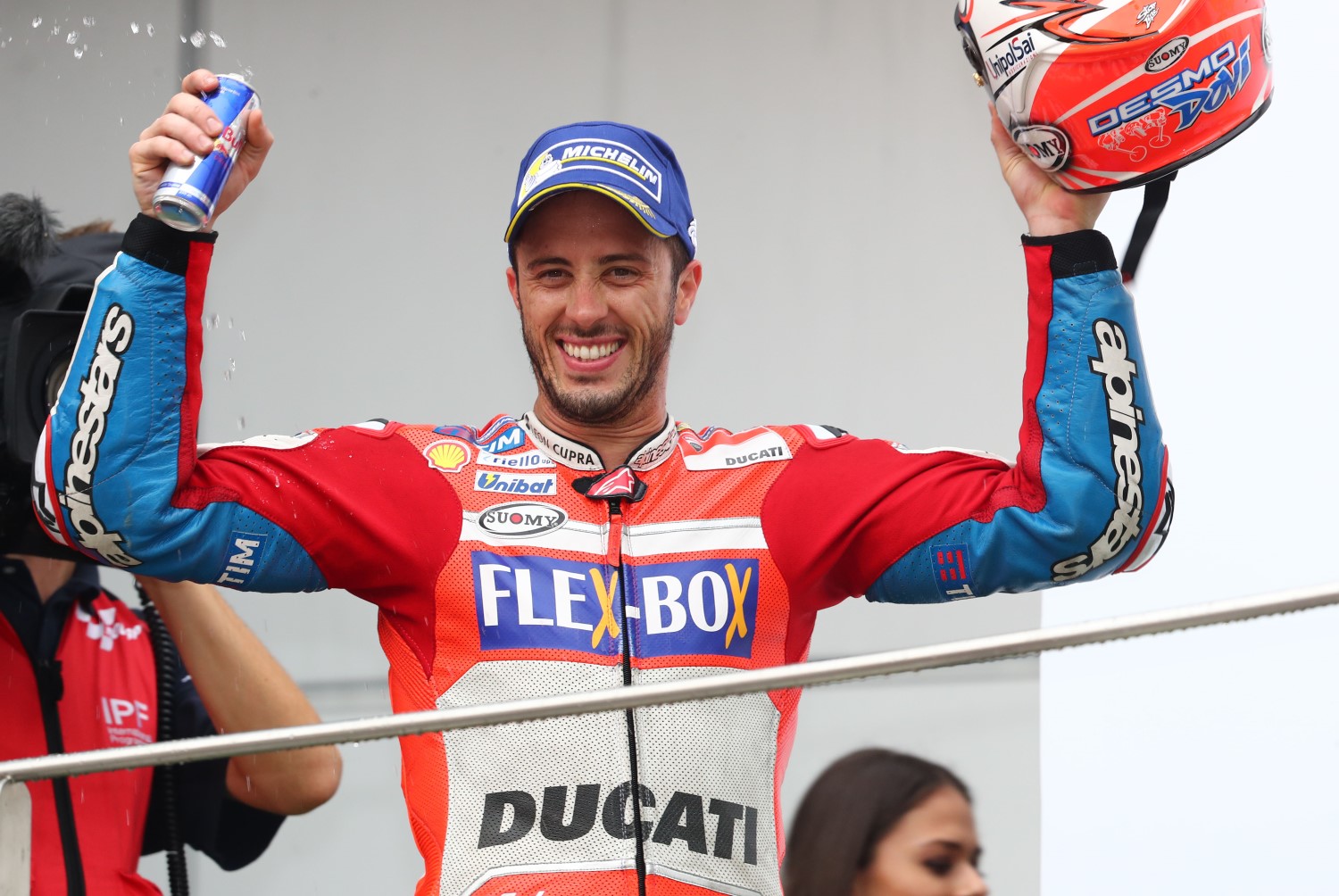 It was a must win for Ducati's Andrea Dovizioso at Sepang Sunday, and the Italian kept calm under intense pressure to secure his sixth win of the season – and take the Championship fight down to the final race. Slicing through the rain to catch and pass teammate Jorge Lorenzo, Dovizioso was seven tenths clear of the Majorcan at the flag in a 1-2 for Ducati – while points leader Marc Marquez (Repsol Honda Team) crossed the line in fourth – not taking too many chances in the race to ensure his title chances.

It was Marquez who took an incredible initial holeshot from the third row, but the reigning Champion headed wide along with Lorenzo – allowing Zarco to slice through into the lead. Once there, the Frenchman lit it up to escape into the distance, and Lorenzo moved through to chase the Tech 3 rider down. Marquez slotted into third, with Dovizioso initially the man to lose out – but the Italian soon began to move through.

Zarco’s lead began to diminish, Dovizioso passed Marquez, and then both Ducatis were able to pass the Frenchman. It seemed Marquez would have the pace to take third from Zarco, but the reigning Champion couldn’t make up the ground. At the front, Lorenzo was holding firm as the two red machines streaked away – but the number 99 then suffered a moment at Turn 15 with a foot off the footpeg. ‘DesmoDovi’ saw his chance to strike, then facing down some nervous laps as the end of the race neared. Lorenzo managed to bring it back to seven tenths over the line, with Zarco back on the rostrum in third.

[adinserter name="GOOGLE AD"]Marquez was eight seconds further back in fourth, with polesitter and teammate Dani Pedrosa (Repsol Honda Team) completing the top five after a more promising showing in the wet for the former winner at the venue in similar conditions. Danilo Petrucci (Octo Pramac Racing) put in a superstar performance in the wet as he was forced to start from the back after a technical problem with his number one bike, and moved up to take sixth over the line – a gain of over 15 places.

Valentino Rossi (Movistar Yamaha MotoGP) was close to his compatriot by the end of the race to take seventh and only four tenths back, ahead of a more lonely finish for EG 0,0 Marc VDS rider Jack Miller into P8. Maverick Vinales (Team Suzuki Ecstar) had a tough race for ninth, with Pol Espargaro (Red Bull KTM Factory) giving KTM another consecutive top ten finish after another impressive race.

It’s now truly everything or nothing for the two title challengers, and the Championship comes back to Europe for the final showdown at Valencia. Marquez leads by 21 points, so it’s a long shot for ‘DesmoDovi’…but never, ever say never.

Andrea Dovizioso
It’s nice to be able to say we couldn’t have done more," smiled the Italian. "We had a perfect weekend, to be on top in practice in both conditions…we improved in the dry from practice to practice, and in the wet we knew our bike worked very well. I saw Marc was fourth, but I didn’t know how close he was to Zarco. But then I saw later on Lorenzo’s pitboard that the rider behind him was Zarco. We did everything perfectly and it wasn’t easy," reiterated the Borgo Panigale factory man. "To show everyone with our work we can really be competitive, at this difficult track, in the dry and the wet…but at Valencia it's a lot of points and I think Marc will be competitive from the beginning. All we can do there is the same, try to be competitive and win the race.

This year, nobody expected us to be there so we have to keep thinking positive," he affirmed. "We can’t make a strategy, we just have to try to win. But this year everything can happen during the weekend, you never know with the weather…but we were relaxed before this weekend and we go to Valencia the same. The points are the reality and you can't change the reality. Even with what Marquez did this weekend, with a difficult weekend, he didn’t fall – so for me to gain 21 points, something has to happen. But the pressure for sure is quite heavy, but then Marc already did it in the past. If Marc wins the Championship, it means he was the best.

Today the race was the most difficult one we could have had for the Championship because we had rain conditions and the track was extremely slippery. Anyway, I got a good start, and I tried to push at the beginning because I didn’t want to be stuck in the middle of the group. Then I tried to find the feeling and the pace but I saw that both the Ducatis were very fast, so I decided to not take too many risks, to be calm, and to get good points for the Championship. I thought about trying to get Zarco but the risk was too big just to have an advantage of 24 points instead of 21. This wasn’t the race to win the Title but rather one to get closer to it. I’m happy because after a difficult weekend, at a track were we always struggle, we still managed to finish fourth. Of course now we need to keep focused, to train well this week, and to work to be at 100% on Sunday in Valencia without relaxing too much with the advantage we have. Today we won the Constructor Title, and that’s a first step!

Dani Pedrosa
Overall I’m happy with the result, and I’d like to thank my team for giving me a bike that allowed me to be competitive. Of course after earning the pole yesterday, the expectations would have been high if the conditions were dry, and when I saw the rain starting to fall I thought we might go from first to last. But in the end we changed the setting, trying something we had never used before in an effort to get more rear grip, and it worked! That and the choice of the soft rear tire gave me confidence. The feeling still wasn’t perfect because the tire was spinning on the straights, but at least it gave me edge grip and I was able to lean the bike. We’ve learned something that I think may also be helpful for the technicians in the future, so we can be satisfied. Today Honda won the Constructor Championship, and that’s important. It’s another title for the Company, and I’m happy about that.