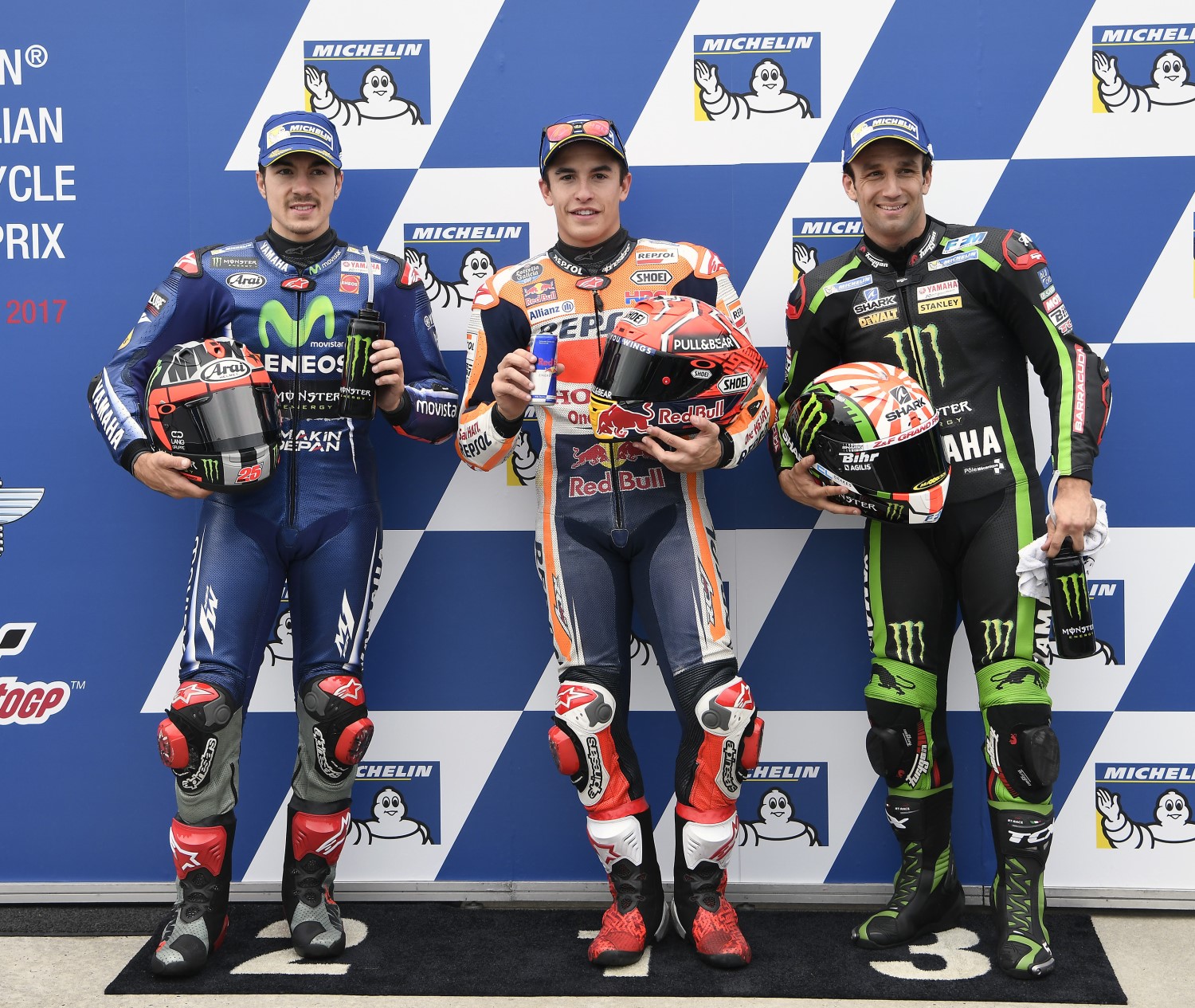 In varying weather conditions, Marc Marquez displayed a great pace on the second day of the Australian Grand Prix, topping the wet FP3 and the dry FP4 before taking a superb pole position to extend his record of poles to 72 in career, 44 in MotoGP, with seven this season and four in a row at Phillip Island.

His amazing qualifying achievement also earned him the fifth BMW M Award in succession, as the best qualifier of 2017.

The reigning Champion took back the honor on his final lap after being threatened at the top by Maverick Vinales (Movistar Yamaha MotoGP) and Motegi polesitter Johann Zarco (Monster Yamaha Tech 3), who will join the reigning Champion on the front row. Marquez’ key title rival Andrea Dovizioso (Ducati Team) had a tough session, taking P11. Skies were dry, but it remained far from tropical on the Island.

[adinserter name="GOOGLE AD"]Andrea Iannone (Team Suzuki Ecstar) heads up the second row as one of the key protagonists of the 2015 Island Battle was unleashed in Q2, with Jack Miller (EG 0,0 Marc VDS) another notable performance in P5 – equaling his best ever qualifying result, also gained at Phillip Island last season. Miller is also back on the grid for the first time since breaking his leg in training three weeks ago, making the second row start even more impressive.

Sixth on the grid is yet another stunning display of progress for Red Bull KTM Factory Racing as Pol Espargaro took the marque onto the second row – and in fully dry conditions. Espargaro has a good record at the Island, including the biggest winning margin in Moto2™ history in 2012.

Valentino Rossi (Movistar Yamaha MotoGP) – the man who led the charge from Q1 – took P7, with Friday’s fastest Aleix Espargaro (Aprilia Racing Team Gresini) just behind in eighth. Bradley Smith (Red Bull KTM Factory Racing), who followed Rossi through from Q1, will line up ninth – making it both KTM riders in Q2 in the dry for the first time. In 2014, Smith took his first premier class podium at the venue.

Cal Crutchlow (LCR Honda) crashed out on a hot lap and was left to complete the top ten, with Andrea Dovizioso just 0.067 seconds behind the Brit. A tough day at the office, ‘DesmoDovi’ will want to replicate his form from the early stages of the Japanese GP, when he moved through from P9 to get in the fight at the front and then take that stunning win. Dani Pedrosa (Repsol Honda Team) was P12.

Just left behind in Q1, Alex Rins (Team Suzuki Ecstar) will start thirteenth, ahead of Tito Rabat (EG 0,0 Marc VDS) and Karel Abraham (Pull&Bear Aspar Team). Jorge Lorenzo (Ducati Team) qualified in P16 after a big crash in FP3 – rider ok, but with a sprained left ankle. The Majorcan will be looking to his stunning record at smashing the pain barrier to move forward on Sunday.

I’m happy because I felt good in every session and in every condition. We found good speed for the single lap, but we were also able to keep a good rhythm in the practices, which is what really counts for the race. I think that the work we did in the FP4 session was important. I was also very comfortable in qualifying, but I encountered some traffic at some points. I understand that the slipstream is important here, and it’s okay if some other guys follow during the practices, but in qualifying I obviously preferred to ride alone. I just waited a bit before exiting for my second flying lap and then I had the chance to do a really good lap. I’m happy with this pole but the race is tomorrow. It’s true that Dovi is a bit behind on the grid here, but also at Motegi he was only ninth! We just have to wait and see how the weather is tomorrow, as it seems it will be unstable like today. Then I’ll try and give my 100% and push from beginning to end.