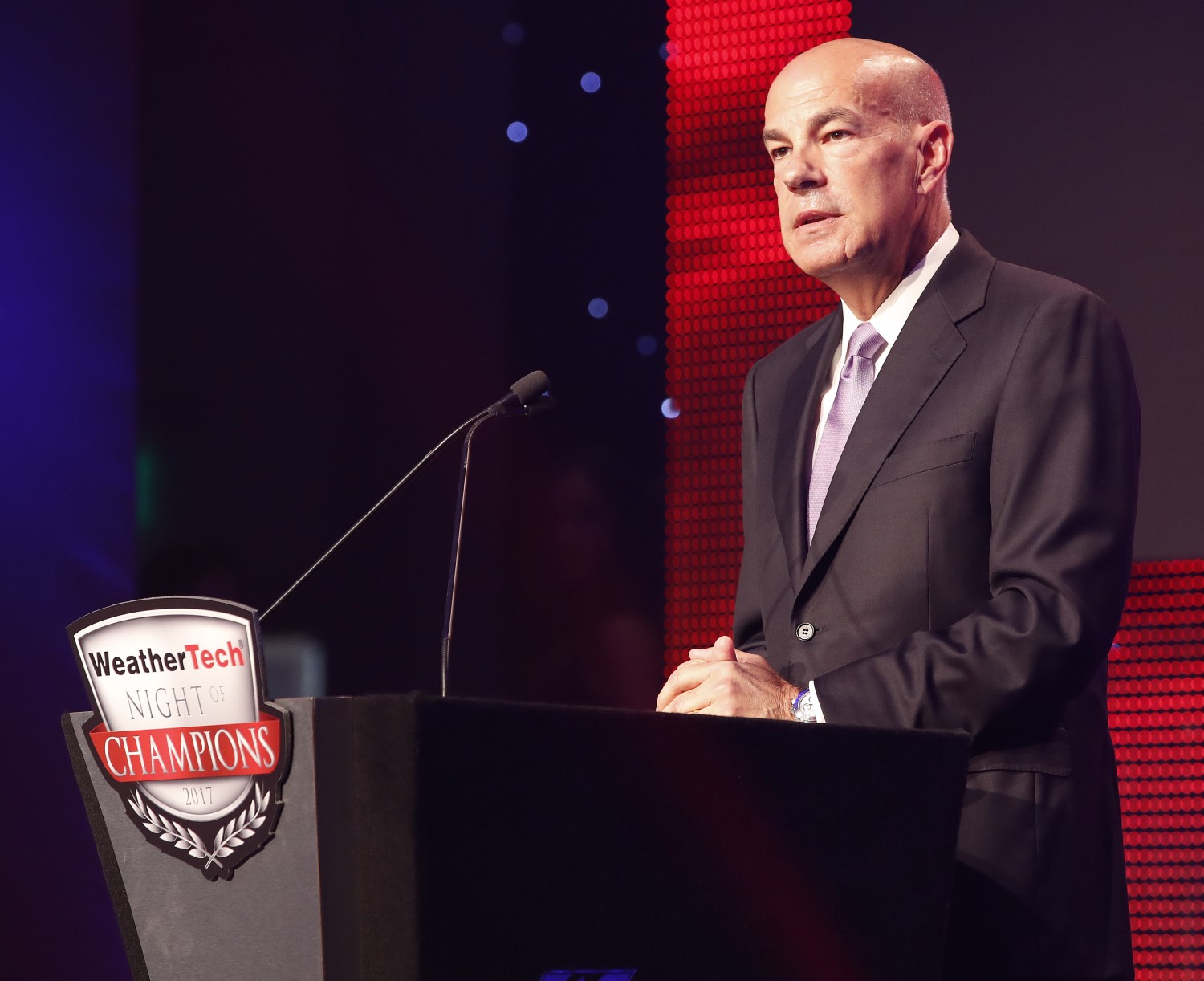 BRASELTON, Ga. – Champions across the IMSA WeatherTech SportsCar Championship came together Monday night to be recognized for their achievements and to celebrate the conclusion of a thrilling 2017 season.

Held at the Chateau Elan Winery and Resort in Braselton, Georgia, drivers, teams and manufacturers received awards for their performances throughout the year. The four class champions received new TUDOR watches to honor their titles.

Receiving awards for their championships in the twelve segments at the series’ four endurance events were the four Tequila Patron North American Endurance Cup champions.

Those races include the Rolex 24 At Daytona, the Mobil 1 Twelve Hours of Sebring Fueled by Fresh From Florida, the Sahlen’s Six Hours of the Glen, and the 10-hour Motul Petit Le Mans.

FOX Sports personalities Justin Bell and Brian Till hosted the proceedings, which began with a one-hour reception, followed by a two-hour presentation ceremony, before ending with a lively after-party featuring live music from The Business.

[adinserter name="GOOGLE AD"]“Of course, the four teams, drivers and manufacturers that we honor as class champions earned that right through near flawless execution and extraordinary performances against fierce competition on and off the racetrack," said IMSA President Scott Atherton as he opened the ceremony. “I’m fortunate to be among the first to offer my congratulations here this evening. To our champions: Well done, all of you."

In the Prototype class, brothers Jordan and Ricky Taylor as part of their father’s team, Wayne Taylor Racing, dominated the first half of the season in their No. 10 Konica Minolta Cadillac DPi-V.R. to take home the Prototype driver and team championship. After winning five straight races to open the season, the Taylors are now the winningest drivers in WeatherTech Championship history with 12 victories apiece.

“This is something that obviously our family has been around my whole life, and I built it up in my mind what it’s going to be like," said Ricky Taylor. “This is obviously a dream come true. I never would’ve imagined that I’d get to share this experience with my family and such a great group of guys and great group of partners we all have here tonight. I’m just really going to soak this in. It’s nice we’ve got another three months until Daytona to enjoy being the champions."

One of the highlights of the evening was when Wayne Taylor came out on stage to receive his team owner’s award. He was wearing his trademark blue glasses and before his interview started Till reached into his suit pocket to produce his own pair of blue sun glasses. The crowd laughed and then enjoyed an emotional speech from Taylor about his family and their life in racing.

Cadillac also took home the Prototype and Patron Endurance Cup manufacturer championships with additional wins from each of the two Action Express Racing teams. Those teams were the No. 31 Whelen Engineering team of Dane Cameron and Eric Curran and the No. 5 Mustang Sampling team of full-time drivers Christian Fittipaldi and Joao Barbosa with Filipe Albuquerque who won the Patron Endurance Cup team and driver championships.

In the GT Le Mans (GTLM) class, Chevrolet and Corvette Racing outlasted intense competition to bring home all three class championships. In what many consider to be the closest GT racing in the world, the No. 3 Corvette C7.R duo of Antonio Garcia and Jan Magnussen recorded a top-five finish in every race this season, including three victories. These championships were the second consecutive for the manufacturer and team.

“This Manufacturer Championship is so special because of the amazing team effort in this intensely competitive GTLM class," said Mark Reuss, executive vice president of General Motors. “Corvette Racing’s passion, dedication and perseverance made the difference. We love racing and learn from every lap about how to deliver the right combination of power, reliability, efficiency and overall performance. We apply those lessons to every Corvette on and off the track. I’m so proud of everyone on the team."

In a close competition, the Patron Endurance Cup championships went to two GTLM separate entities, neither of which won the class championship. Ford was presented with the manufacturer trophy, while the No. 911 Porsche GT Team with full-time drivers Patrick Pilet and Dirk Werner took home the team and driver championships.

Finally, the GT Daytona (GTD) class saw exponential growth heading into the 2017 season, which saw a total of eight manufacturers compete full-time and seven of which won at least one race this year. However, it was defending champions Alessandro Balzan and Christina Nielsen in the No. 63 Scuderia Corsa Ferrari 488 GT3 that were crowned yet again after finishing on the podium seven times.

"I knew it was going to be a challenge," stated Nielsen. "We always come in with the mentality that every championship, we have to come in starting from zero and you can't rely on any of the results that you've had. We had the championship for Ferrari in mind, but honestly, at Scuderia Corsa, we always go into every race to fight. That's the beauty of this team, and that's what makes it so special."

Additional awards presented at Monday evening’s WeatherTech Night of Champions and are listed below.

Continental Tire Extreme Spirit Award: Presented to the individuals who demonstrate respect for fellow competitors, sponsors, track operators, officials, media and fans, and act as ambassadors for IMSA on and off the track based on their qualities of sportsmanship and commitment to excellence.

VP Racing Fuels Front Runner Award: Presented to the team that had the most lap-leading efforts

DEKRA Green Award: Presented to the GTLM team that is the cleanest, fastest and most efficient on the racetrack – No. 67 Ford Chip Ganassi Racing Ford GT

Bob Akin Award: Given to the top Pro-Am competitor in the GTD class – Ben Keating, driver of the No. 33 Riley Motorsports-Team AMG Mercedes-AMG GT3