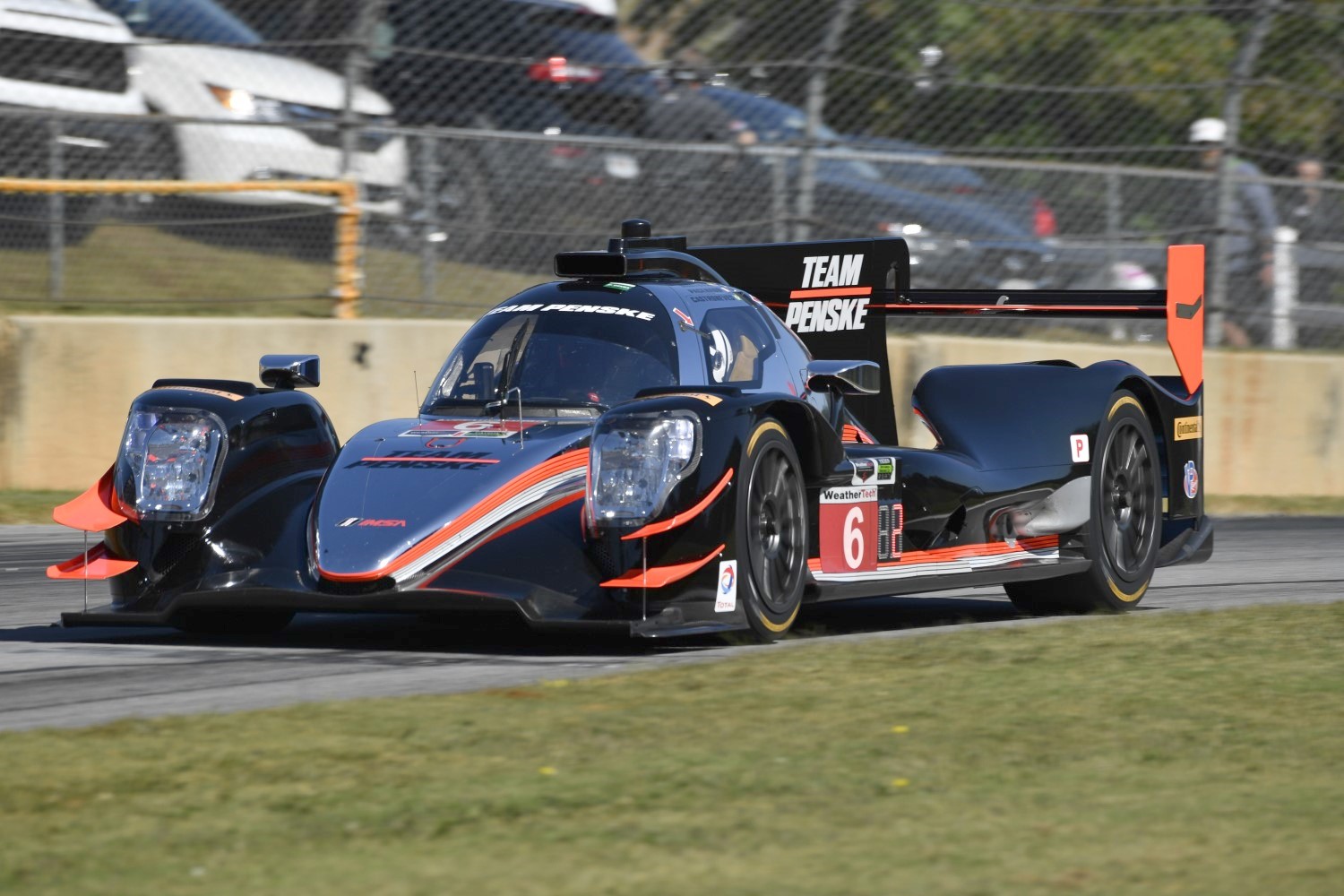 It certainly didn’t take long for the organization to get acclimated to IMSA competition, with Helio Castroneves scoring the TOTAL Pole Award Friday afternoon in the No. 6 ORECA LM P2. The team is competing with the ORECA this weekend before campaigning a pair of Acura DPi prototypes in 2018.

“It’s not a statement," said Castroneves. “I’ll tell you what, we’re still learning. First of all, thanks to Team Penske for this great opportunity. I can’t obviously forget about my teammates, Simon [Pagenaud] and Juan Pablo [Montoya] because I had a big shunt about a week ago. And man, to bring back that confidence it was a little bit tough, but my guys were able to coach me and make sure we got it."

He moved to the top of the charts six minutes into the 15-minute qualifying session, and bested that lap one circuit later with a TOTAL Pole Award-winning lap of one minute, 11.314 seconds (128.221 mph).

The No. 22 Nissan DPi of Pipo Derani qualified second, 0.161 seconds behind Castroneves. It was a strong qualifying session for the Tequila Patron ESM team with Derani’s No. 22 entry qualifying one spot better than teammate Brendan Hartley in the No. 2 Patron Nissan DPi.

The Motul Petit Le Mans is the final race of the WeatherTech Championship season, as well as the final round of the Tequila Patron North American Endurance Cup. The championship-leading Konica Minolta Cadillac DPi team of Ricky Taylor, Jordan Taylor and Ryan Hunter-Reay qualified seventh.

FOX Sports has live coverage Saturday of the Motul Petit Le Mans, beginning at 10:30 a.m. ET on FS1, with a full live stream available on FOX Sports GO with FS1 authentication. FS2 continues the broadcast from 11:30 a.m. to 2:30 p.m. ET, with FOX Sports GO exclusive coverage from 2:30 to 5 p.m. ET. The race concludes on FS2 from 5 to 9:30 p.m. IMSA Radio has live coverage throughout on IMSA.com, RadioLeMans.com and SiriusXM Radio.

Going for that eighth consecutive win, the team will start from a familiar place with French muscling the No. 38 ORECA FLM09 to his seventh pole in eight races with a lap of one minute, 16.069 seconds (120.206 mph). He will be joined this weekend by full-season co-driver Pato O’Ward and Kyle Masson.

It’s been an up-and-down season for Risi Competizione in the IMSA WeatherTech SportsCar Championship, but the team will look to go out on a high note after scoring the pole Friday for the season-ending Motul Petit Le Mans at Road Atlanta.

Toni Vilander grabbed the top spot from the Ford of Richard Westbrook with six minutes remaining in the 15-minute session, and bested his own lap three minutes later for a pole-winning time of one minute, 17.660 seconds (117.743 mph). It was the second consecutive pole for the No. 62 Risi Competizione Ferrari 488 GTE team. Vilander will be joined by co-drivers Giancarlo Fisichella and Alessandro Pier Guidi this weekend.

“Every time we come back to this track the car gets better and better," said Vilander, who has two victories at Motul Petit Le Mans. “I feel like I can get even more out of the car. I’m happy for the Risi crew and I’m really looking forward to the race tomorrow."

Risi Competizione started the 2017 season with back-to-back podium finishes at the Rolex 24 At Daytona and the Mobil 1 Twelve Hours of Sebring, but then suffered a trio of on-track accidents at Long Beach, Circuit of The Americas and the 24 Hours of Le Mans. After a four-race hiatus, the team returned to VIRginia International Raceway and placed third, and followed that up with a second place finish at Mazda Raceway Laguna Seca two weeks ago.

The points-leading No. 3 Corvette Racing Corvette C7.R of Antonio Garcia qualified second, moving up following a post-qualifying ride height infraction for the No. 67 Ford GT of Westbrook.

FOX Sports has live coverage Saturday of the Motul Petit Le Mans, beginning at 10:30 a.m. ET on FS1, with a full live stream available on FOX Sports GO with FS1 authentication. FS2 continues the broadcast from 11:30 a.m. to 2:30 p.m. ET, with FOX Sports GO exclusive coverage from 2:30 to 5 p.m. ET. The race concludes on FS2 from 5 to 9:30 p.m. IMSA Radio has live coverage throughout on IMSA.com, RadioLeMans.com and SiriusXM Radio.

A driver with only six career IMSA WeatherTech SportsCar Championship starts went head-to-head with one of IMSA’s most decorated drivers in qualifying Friday for the Motul Petit Le Mans at Road Atlanta. In the end, it was the Ferrari of Matteo Cressoni who edged out the Acura of Andy Lally with three minutes remaining in the 15-minute GT Daytona (GTD) class qualifying session to score his first career TOTAL Pole Award.

Cressoni lapped the 2.54-mile circuit in one minute, 20.661 seconds (113.361 mph) for the pole-winning lap in the No. 63 Scuderia Corsa Ferrari 488 GT3. He last competed with Scuderia Corsa at Watkins Glen in June, finishing second alongside co-drivers and current points leaders Christina Nielsen and Alessandro Balzan as a third driver for the WeatherTech Championship’s four Tequila Patron North American Endurance Cup events.

“You know, we didn’t know until today [we’d be so fast]," said Cressoni. “What can I say? The car was fantastic and the team did an amazing job. I want to say thanks to the team, and this guy [Alessandro Balzan], my teammate who helped me yesterday to get me some laps in the car and get used to it and this track. Now we focus on the race to go tomorrow."

The driver Cressoni edged for the TOTAL Pole Award is no stranger to victory lane with 34 career wins, but Lally typically does not typically qualify for the Michael Shank Racing w/ Curb-Agajanian team and has just one pole in the WeatherTech Championship.

He was in position to make the most of the opportunity, but was nipped for the pole by 0.078 seconds. He made one last run at the pole on his final lap, but went off track.

Jack Hawksworth qualified third in the No. 15 Lexus RC F GT3 with six different manufacturers making up the top six spots in the session.