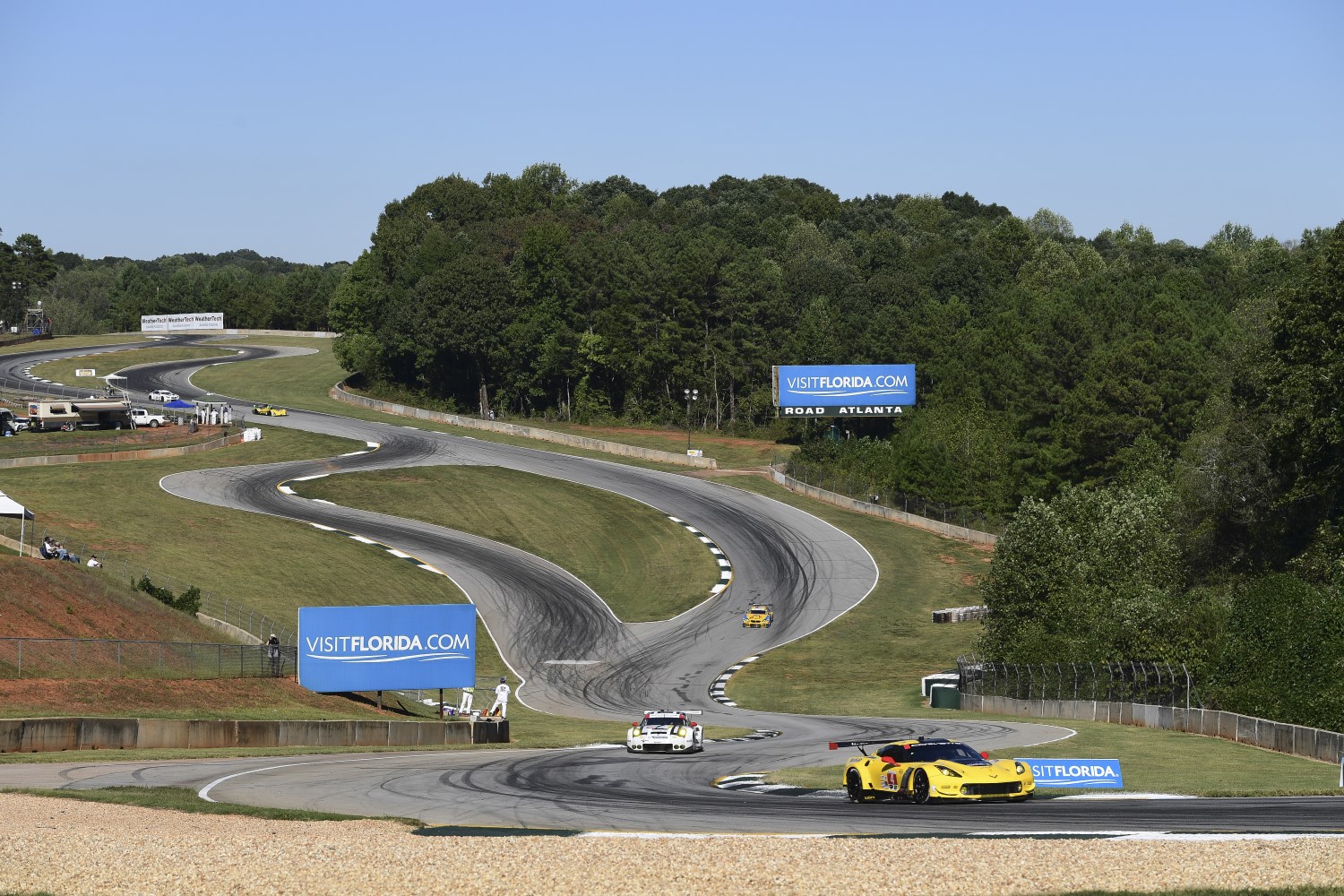 FOX Sports has live coverage of the 10-hour race, beginning at 10:30 a.m. ET on FS1, with a full live stream available on FOX Sports GO with FS1 authentication. FS2 continues the broadcast from 11:30 a.m. to 2:30 p.m. ET, with FOX Sports GO exclusive coverage from 2:30 to 5 p.m. ET. The race concludes on FS2 from 5 to 9:30 p.m. IMSA Radio has live coverage throughout on IMSA.com, RadioLeMans.com and SiriusXM Radio.

The Taylor brothers had a storybook opening to their 2017 season in the Prototype class. They won the Rolex 24 At Daytona alongside NASCAR champion Jeff Gordon and longtime co-driver Max Angelelli in his final race. They went on to win the Mobil 1 Twelve Hours of Sebring Fueled by Fresh From Florida, accomplishing the same 36 Hours of Florida sweep as their father and team owner, Wayne Taylor, did 21 years earlier. In fact, they won the first five consecutive races.

“This year has been the best year of my entire career," said Ricky Taylor. “It’s been unbelievable, from driving with Jordan – which is always great – but to win together at Daytona, Sebring, and the first five races. Hopefully, it’s going to end up with a championship. It’s just been an incredible year.

[adinserter name="GOOGLE AD"]Those five consecutive victories helped the Taylors build a substantial lead in the championship standings, which they’ve been working to protect for the past several races, sometimes at the expense of challenging for more wins.

They head into Saturday’s Motul Petit Le Mans with a 29-point lead over 2016 Prototype champions Dane Cameron and Eric Curran in the No. 31 Whelen Engineering Cadillac DPi-V.R, meaning that the No. 10 duo will clinch the title even if they finished last in the 10-car Prototype field. They’ll look to do more with that, especially with past IndyCar champion and Indianapolis 500 winner Ryan Hunter-Reay joining as their co-driver.

“Once we take the green, we’ve won the championship," said Jordan Taylor. “After that, it opens us up to where we can take risks to win (the race). Obviously, it’s a big race, being Petit Le Mans, so it’s one everyone wants to win.

“We also have the (Tequila PatrÃ³n North American Endurance Cup) to fight for, so we can take risks at those hour marks where we need to find points [awarded at the four- and eight-hour marks as well as at the finish]. We’ll definitely be fighting for that one a lot harder this weekend."

Magnussen and Garcia are in a similar boat in the GT Le Mans (GTLM) class. On the strength of victories at Sebring, Circuit of The Americas and VIRginia International Raceway and a total of nine top-five finishes from the ten races thus far, they lead No. 67 Ford Chip Ganassi Racing Ford GT co-drivers Richard Westbrook and Ryan Briscoe by 19 points, 302-283.

They also only will need to score points to win the WeatherTech Championship GTLM title. Their endurance co-driver is Mike Rockenfeller.

“It’s still a little hard to believe that we are this close to securing the driver’s championship," Magnussen said. “It has been an incredible season, but there is still a lot of work to do, especially for the manufacturer’s title [which Chevrolet currently leads by four points, 316-212, over Ford].

“No one at Corvette Racing is taking anything for granted. Petit Le Mans requires maximum attention and focus to have a chance at the win, so that is what we will do. We have a very strong lineup again with myself, Antonio and Rocky. All year long, we have performed at the highest possible level without making mistakes. Another race like that should be enough to deliver a sweep of the GTLM championships."

As for Alessandro Balzan and Christina Nielsen, the 2017 Motul Petit Le Mans looks a lot like the 2016 rendition. Last year, Nielsen needed to achieve the minimum drive-time to clinch the WeatherTech Championship GT Daytona (GTD) title for herself, Balzan and the Scuderia Corsa team and did it with a marathon three-hour stint to open the race.

She and Balzan lead No. 33 Riley Motorsports-Team AMG Mercedes-AMG GT3 driver Jeroen Bleekemolen by 26 points, 318-292, peaking at precisely the right time by winning their first race of the season last time out in the Continental Tire Monterey Grand Prix at Mazda Raceway Laguna Seca.

So, what will it take for Nielsen and Balzan to win their second straight GTD title, Scuderia Corsa’s third straight and the team’s fourth in five years? Yep, you guessed it. Nielsen needs to achieve the minimum GTD drive time of two hours, 45 minutes. It’s a good thing she likes Road Atlanta.

“Road Atlanta is my favorite track," said Nielsen, a native of Denmark. “It’s a high-speed, fluid road course and is quite technical as it requires precision from the driver. And, it’s the first American track I ever raced at. We had a podium finish here last year, so hopefully, we can repeat that. It would be nice to finish off with a victory, but anything can happen in a 10-hour race."

Indeed, anything can happen at Motul Petit Le Mans. That is, except for a team other than the No. 38 Performance Tech Motorsports program in the Prototype Challenge (PC) class. Season-long co-drivers James French and Patricio O’Ward, who have won all seven of the year’s PC races to date, clinched the title in the class’ most recent race at Road America in August.

They’ll look to close out the final season of PC action in the WeatherTech Championship by preserving their perfect record, with their endurance racing teammate, Kyle Masson, with whom they’ve also clinched the Tequila PatrÃ³n North American Endurance Cup title.

In GTLM, one of five different teams can win it, with the No. 911 Porsche GT Team pairing of Dirk Werner and Patrick Pilet currently leading the way. In GTD, it’s a six-car race for the PatrÃ³n Endurance Cup, with Nielsen, Balzan and their endurance racing teammate, Matteo Cressoni, leading the way.

Practice for the Motul Petit Le Mans gets underway Thursday with a trio of practice sessions, including a 90-minute night practice starting at 7:30 p.m. ET. Friday’s schedule includes another practice session, with WeatherTech Championship qualifying set to begin at 4:20 p.m. ET. The green flag drops on Saturday’s race at 11:05 a.m. ET.

Tickets for the Motul Petit Le Mans are available at RoadAtlanta.com.

To commemorate the 20th anniversary of the Motul Petit Le Mans, we’ve pulled 20 statistics about drivers, teams and manufacturers that have competed in the famous 10-hour endurance race.

3: Drivers who have won both the Motul Petit Le Mans and the Continental Tire SportsCar Challenge race at Road Atlanta (however, none of which came on the same weekend).

5: The most Motul Petit Le Mans wins by a driver. Oliver Gavin, Jorg Bergmeister, Rinaldo Capello and Sascha Maassen are at the top of the all-time wins list. Jan Magnussen is the only active driver with four wins.

6: Of the 13 chassis marques and 14 engine marques that have competed in the Motul Petit Le Mans, six of each will be competing in 2017.

8: The most number of wins by an entrant (Chevrolet Corvette Racing). Alex Job Racing and Risi Competizione are the next closest active entrants with four wins each.

9: The most lead-lap finishers for any class at the Motul Petit Le Mans (2015- Overall, GTLM).

16: Drivers on the 2017 Motul Petit Le Mans entry list who have won a pole at the event.

19: The highest number of wins by an engine manufacturer (Porsche). In second place are Audi and Chevrolet with 10.

24: Drivers on the 2017 Motul Petit Le Mans entry list who have posted the fastest laps in class at the event.

35: Drivers on the 2017 Motul Petit Le Mans entry list who have won the race in the past.

141: Drivers who have won the Motul Petit Le Mans.