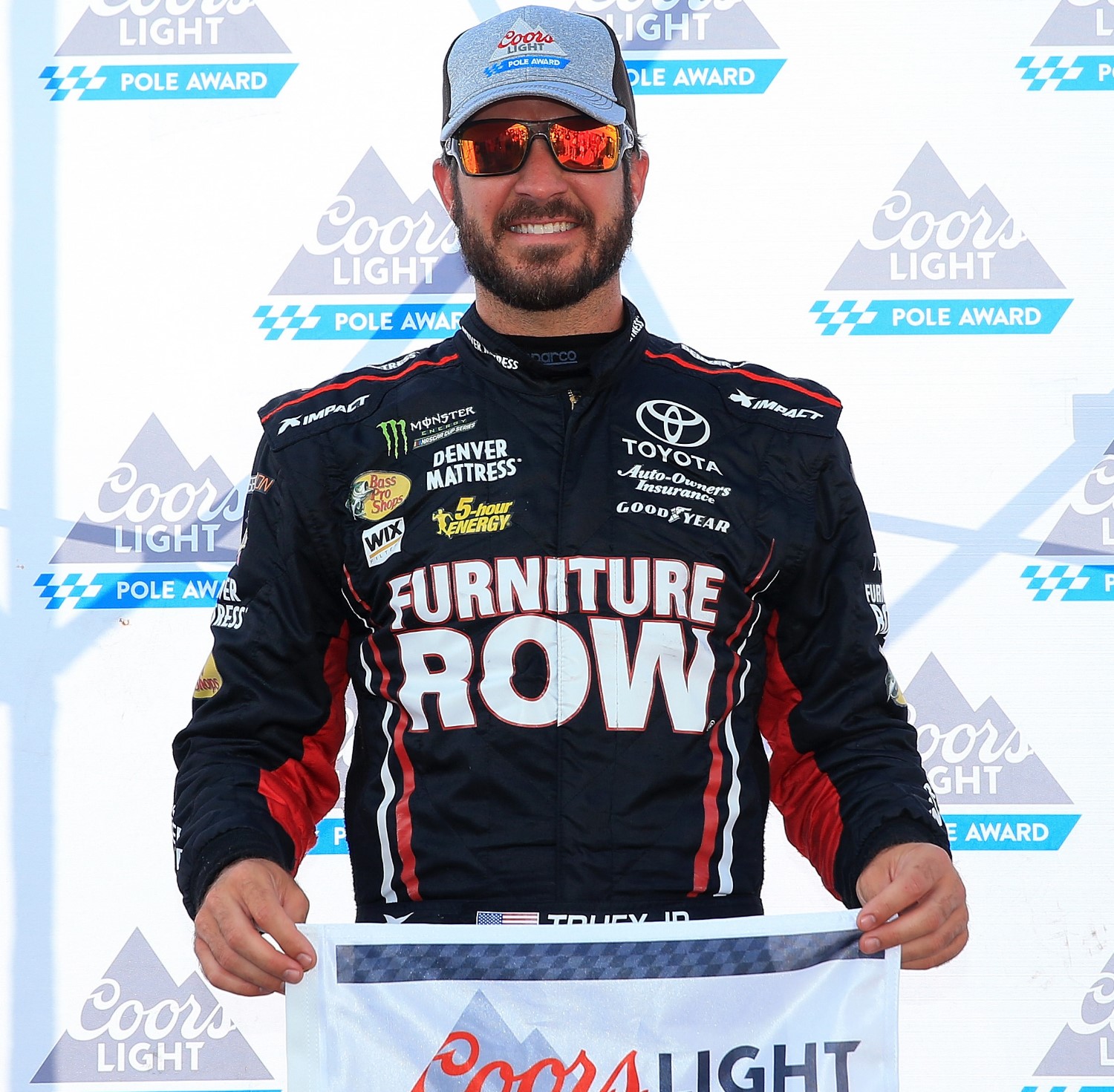 Truex won his second Coors Light Pole Award of the season, his third at Dover — the closest facility to his Mayetta, New Jersey, home town — and the 14th of his career. Winner of a series-best five races this season, Truex will start on the front row for the ninth time this season.

“We just kind of chased it a little bit — chased the balance — and I thought we were pretty close at the end of practice," Truex said. “We hit it pretty close for Round 1 (of qualifying) and tweaked on it a little from there.

“We put together a decent lap for Round 1, and the guys did an awesome job all day. So, really proud of them, and I’m looking forward to getting some more bonus points.

[adinserter name="GOOGLE AD"]With a victory at Chicagoland Speedway in the opening event of the Playoff, Truex already has locked up a spot in the Round of 12. His 19 stage wins and 59 Playoff points both are tops in the series.

Going for his third straight qualifying sweep, Busch was fastest in the first and second rounds but fell short in the third. With last Sunday’s victory at New Hampshire, Busch also is guaranteed a spot in the Round of 12.

“It was a good run for us," said Busch, whose lap at 160.800 mph in the second round was the fastest of the day. “I thought the first two rounds, obviously, we showed really good speed — probably used up a little too much tire in Round 2, and I just wasn’t able to follow through in that third round and get a quick enough time to hold off Martin. …

“But I’m excited to have a Toyota front row, and we’ll go race ’em on Sunday."

After posting the third-fastest time in Friday’s opening practice, 11-time Dover winner Jimmie Johnson qualified a disappointing 17th and failed to advance to the final round.

“The track changed a little more than we adjusted for is really what it boils down to," Johnson said. “We felt like it was going to do that and made an effort at it and just didn’t go far enough."

Nevertheless, Johnson has unwavering confidence in his No. 48 Chevrolet under race conditions.

“Yeah, the great thing is just how fast the car was off the truck," said Johnson, who is seeking an unprecedented eighth series championship. “I know when it comes to race time we will be fine here. Qualifying for me is qualifying, so we had speed this morning, and I know it’s in there."

Of the drivers fighting from the bottom of the playoff standings for the final positions in the Round of 12, Ryan Newman had the best effort in time trials, qualifying eighth. Relative to the field, Ricky Stenhouse Jr. improved over practice and secured the 15th position on the grid.

Austin Dillon, currently tied with Stenhouse for the 12th and final position in the next round, will start 23rd, while Kurt Busch and Kasey Kahne — both of whom likely will need a victory to advance from their respective 15th and 16th positions in the standings — qualified 13th and 21st, respectively.

“We just didn’t have the rotation we needed to kind of finish off the end of the corner," Dillon said. “It’s tough. We’ve been not that great since we unloaded. We’ll keep working on it though. Usually, the race comes to us a lot more than qualifying does."

How is this weekly battle with Kyle Busch going?

“Well, I’m glad for once we’re first and he’s not. I’ve been second to him a lot in qualifying, so it’s cool to – for us to get a pole. I think he was second, am I correct? Yeah, so it’s – we’ve been on the front row quite a few times together, so feels good that we’re the one in first this time, so it’s pretty cool."

Was there ever a time where you wondered what it would be like to be the guy and does it mean more now?

“Yeah, for sure and I actually think I’ve talked to Jimmie (Johnson) about this before, you know, years ago at Champion’s Week or something. It’s definitely – I think every driver thinks about it at this level when you get here. It takes so many things to come together to be in a position that I’ve been in the past few years really, so, yeah, I’m very thankful and I’m definitely enjoying it. I’m trying to enjoy every single week one at a time. At the same time, there’s that chance at a championship out there, so you can’t lose focus and say, ‘Well, this is going great. We’re just going to show up to the track and everything is going to be fine.’ You still have to work hard. It’s still difficult, so I think we’ve done a good job of just staying focused and getting through all that stuff and continuing to come to the race track and perform, because you never know when it’s going to end or when things could change. So just try to take advantage of the opportunities right now and it’s certainly been a lot of fun, but, you know, I think the more you win, the more success you have, the more you want it I feel like and so we’re going after it every week."

How was your lap in the final round of qualifying?

“Hate it that we didn’t come out of here with our ninth pole of the season, but we’ll take it. It’s a front row starting spot, but hopefully it’ll be a good enough pit selection. Obviously, there’s no better position than number one. We’ve been on a really good roll here as of late with qualifying and everything like that for this year. The M&M’s Carmel Camry has got some good speed in it. I was a little worried that I wasn’t going to have the speed that we needed to contend for a pole, but obviously we had it here right now when it mattered. We’ll go back to the drawing board and work on race stuff for tomorrow."

Do you have nothing to lose this weekend?

“Nothing to lose. Biggest thing that you focus on here is just getting that good starting spot which will allow us to race for stage points up there, but we know who the stage point king is this year, so we’ve got to out race him for those (points). I’m sure there early on, but anything can happen here. We saw last weekend that anything can happen. You can’t expect to not have anything come up out of the next corner you’re in. Dover tends to bite you in the least susceptible moment, so we’ll just keep fighting it out and race hard."