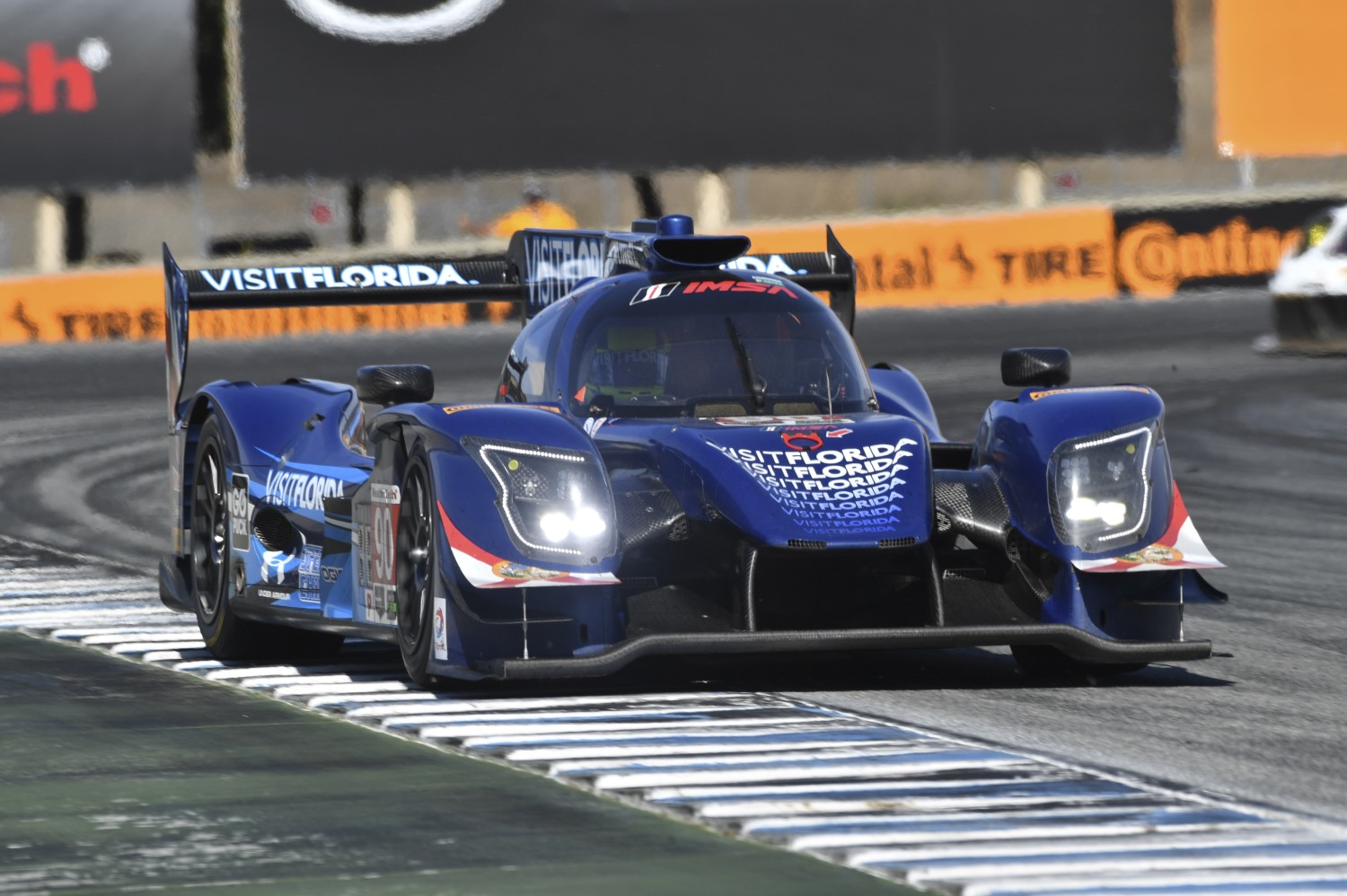 MONTEREY, Calif. – The infamous ‘Corkscrew’ at Mazda Raceway Laguna Seca has seen its share of iconic passes over the years, but the winning pass in Sunday’s IMSA Weather Tech SportsCar Championship race definitely made the list.

With a clever strategy, outstanding teamwork, and some bold moves from drivers Marc Goossens and Renger van der Zande, VISIT FLORIDA Racing scored a dramatic victory in the closing moments of the America’s Tire 250 at Mazda Raceway Laguna Seca on Sunday.

Renger van der Zande – competing for the VISIT FLORIDA Racing team that had its Daytona Beach, Florida, race shop and equipment damaged in Hurricane Irma just 14 days ago – made the bold move with three laps remaining. After slowly reeling in Dane Cameron over the final 20 minutes of the two-hour, 40-minute AMERICA’S TIRE 250, van der Zande charged from nearly five car lengths back, outbraking the race leader with three laps remaining and completing the winning pass by the exit of the corner.

Van der Zande went on to win by 2.248 seconds in the No. 90 Ligier LM P2 started by co-driver Marc Goossens. It was the first win of the season for VISIT FLORIDA Racing, and the first WeatherTech Championship win for an LM P2 prototype.

“I asked over the radio, ‘Hey guys, can I go for it?’," said van der Zande, who also won at Mazda Raceway in the Prototype Challenge class in 2014. “You know, it’s their car. They said, ‘Yeah, go for it’ and I knew the Corkscrew was the place to do it. It was one shot, two minutes to go, and I just did it."

It was an emotional win for VISIT FLORIDA Racing. After Hurricane Irma swept through Central Florida, team owner Troy Flis said the team found two feet of water in its shop and a foot of water in its offices, and damaged race equipment.

[adinserter name="GOOGLE AD"]“Irma put everybody a little bit behind, but Florida is back open," he added. “We love Laguna, and we knew this was going to be our best shot [to get a win]. I knew we had the best team and the best guys. It was a big challenge to get an LM P2 car to win overall, and I got to give it to these guys, they did a heck of a job."

The victory is the third at the track for the team having won in 2012 and 2015 in a Daytona Prototype, and marks the third consecutive podium result at the 2.238-mile circuit for VISIT FLORIDA Racing. It was also the second podium of the season for the team, which opened the year with a run to third place in the Rolex 24 At Daytona.

The runner-up finish was good enough to vault the No. 31 Whelen Engineering Cadillac DPi-V.R of Cameron and co-driver Eric Curran to second in the series standings with only the 10-hour Motul Petit Le Mans season finale remaining in two weeks. The deficit is nearly insurmountable, however, with points leaders Ricky and Jordan Taylor and the No. 10 Konica Minolta Cadillac DPi-V.R. team unofficially holding a 29-point lead.

The brothers finished third at Mazda Raceway and can clinch their first WeatherTech Championship title by starting the season-ending race at Road Atlanta and scoring points.

Danny Sullivan became famous for his “spin and win" victory over Mario Andretti in the 1985 Indianapolis 500.

Sullivan now makes his home on the Monterey Peninsula, just a few miles away from Mazda Raceway Laguna Seca, where John Edwards did his best Sullivan impression in Sunday’s AMERICA’S TIRE 250, spinning on the opening lap and then going on to win the two-hour and 40-minute IMSA WeatherTech SportsCar Championship GT Le Mans (GTLM) race in the No. 24 BMW Team RLL BMW M6 GTLM alongside co-driver Martin Tomczyk.

Edwards dropped all the way to last in the 33-car field after spinning in – appropriately – the Andretti Hairpin (Turn 2) just seconds after the green flag dropped on the race. It took him only eight laps to work his way back through the entire GT Daytona (GTD) field.

He turned the car over to Tomczyk for the middle driving stint in the race and the former DTM champion worked his way into sixth in class for the majority of his stint. Edwards took over again just past the halfway point in the race under a full-course caution period and restarted the race in third place.

He got a good jump to get around Antonio Garcia in the No. 3 Corvette and took the lead from Joey Hand in the No. 66 Ford GT three laps later. From there, Edwards went into fuel conservation mode with polesitter Toni Vilander right on his heels in the No. 62 Risi Competizione Ferrari 488 GTE.

“The hardest part is when you see a car like the Ferrari going flat out and catching you," said Edwards. “I was hitting my number and I asked, ‘Do I need to fight him or do I need to hit the number.’ They said, ‘Hit the number. The Ferrari will need to make another pit stop.’"

Vilander took the lead with 53 minutes remaining and stayed there for nearly 20 minutes before making his final stop, surrendering the lead to Edwards once again. Still in fuel-conservation mode, Edwards played his fuel strategy to perfection and held of one final surge from Vilander coming off the 11th and final turn, winning a drag race to the checkered flag by 0.152 seconds.

“In order to hit our number, we were giving away so much lap time that the Ferrari was able to catch back up and it was pretty close at the end," Edwards said. “Ultimately, it’s a good thing it’s a two-hour and 40-minute race and not a two-hour and 45-minute race, because he was running flat out and I think he could have had a shot."

It was Edwards’ second career WeatherTech Championship victory and his first since winning at Mazda Raceway Laguna Seca in 2015. For Tomczyk, who is competing in his first season of WeatherTech Competition, it was his first win.

“Finally, we are on the top step," Tomczyk said. “I have to say thank you to John, because he did an outstanding job today with the fuel saving in the last stint and getting through the GTD field in the first stint when he got spun around in the first corner. At the end, it really worked out well."

After starting from the pole position and hovering at or near the top of the GTLM speed charts throughout the weekend, Vilander and co-driver Giancarlo Fisichella scored their second consecutive podium result with a second-place run. The duo finished third last month in the Michelin GT Challenge at VIRginia International Raceway.

The No. 62 team also won the DEKRA Green Award in the race, going to the car that was the cleanest, fastest and most efficient in the GTLM field as scored by a formula established in a partnership between IMSA, the U.S. Department of Energy, Environmental Protection Agency and SAE International.

Third in GTLM went to Patrick Pilet and Dirk Werner in the No. 911 Porsche GT Team Porsche 911 RSR. Jan Magnussen and Garcia retained their points lead with a fourth-place run in the No. 3 Corvette, and Ryan Briscoe and Richard Westbrook made it five different manufacturers in the top five with their fifth-place performance in the No. 67 Ford GT for Ford Chip Ganassi Racing.

Heading into the 10-hour Motul Petit Le Mans on Oct. 7 at Road Atlanta, Garcia and Magnussen lead Briscoe and Westbrook by 19 points, 302-283. With a nine-car GTLM field expected, the No. 3 teammates simply need to score points in the race to clinch the title.

No. 63 Scuderia Corsa Ferrari 488 GT3 co-drivers Christina Nielsen and Alessandro Balzan built a solid lead in the 2017 IMSA WeatherTech SportsCar Championship GT Daytona (GTD) class standings with a run of six consecutive podium results in the middle of the season.

However, a victory was still missing on the team’s 2017 résumé. That changed on Sunday at Mazda Raceway Laguna Seca.

Through a mix of aggression and fuel strategy, Balzan established himself as a contender for the victory in the closing stages of the race, then capitalized when Colin Braun pitted from the lead with less than five minutes to go in the No. 54 CORE autosport Porsche 911 GT3 R to take the lead.

Balzan held on from there, winning by 6.550 seconds over the No. 93 Michael Shank Racing with Curb-Agajanian Acura NSX GT3 shared by Andy Lally and Katherine Legge. It was Balzan’s sixth IMSA victory and the third for Nielsen, and was the first for the duo since the 2016 Sahlen’s Six Hours of The Glen.

“The first stint, the team said, ‘Ale, attack," Balzan said. “We need to gain time. We need to push.’ It was fun. I gave everything I had, 110 percent every lap, a qualifying lap, and the car was really crazy good today. It was perfect at the track that is the home for Scuderia Corsa. The second stint, after the yellow, they said, ‘Alessandro, you have to work hard on the fuel. That was even more fun. Working with numbers on the car, on fuel consumption was challenge. It was great. I did it great, but I got support every lap from the pit lane."

An emotional Nielsen celebrated alongside her teammate – with whom she co-drove to the 2016 WeatherTech Championship GTD title – in Victory Lane. It was validation for what already has been an outstanding season.

“As a team, we’ve fought really hard all season," Nielsen said. “Last year, we were with a new car. This year, we’re on the second year, and I don’t think anyone expected us to be in contention. We would be a strong contender for the championship, but I don’t think anyone believed that we could do it again. We’ve been fighting so hard.

“We’ve had so many podiums, we’ve had good runs, but to finally take that victory, there’s just something about it. It doesn’t feel as a whole, if you’re on the verge of winning a championship, if you don’t have a victory among those podium finishes as well. I am so proud to be with those guys. They make me so happy."

Ferrari became the sixth different manufacturer to win a race this season in the GTD class. The victory enabled Nielsen and Balzan to extend their championship lead to 26 points, 318-292, over Jeroen Bleekemolen – who finished eighth in class Sunday alongside co-driver Ben Keating in the No. 33 Riley Motorsports-Team AMG Mercedes-AMG GT3 – heading into the season-ending Motul Petit Le Mans in two weeks.

Lally and Legge picked up their fourth podium of the season, but first since a second-place run at Canadian Tire Motorsport Park in July. Patrick Lindsey and Joerg Bergmeister rounded out the podium with a third-place performance in the No. 73 Park Place Motorsports Porsche 911 GT3 R.

Results for the AMERICA’S TIRE 250 are available at Results.IMSA.com.