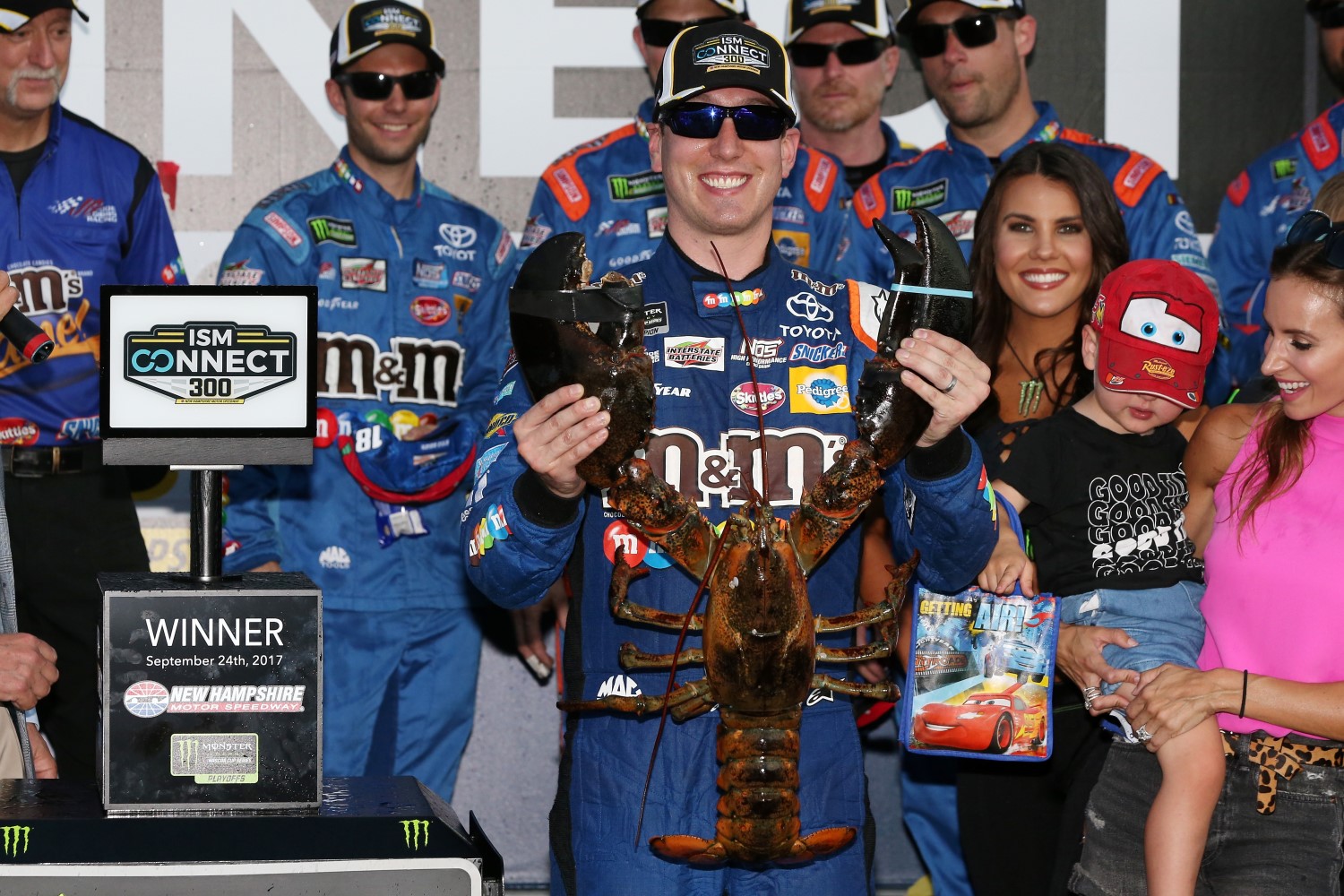 Kyle Busch didn't need a smokescreen to win Sunday's ISM Connect 300 at New Hampshire Motor Speedway – he simply had to survive one.

Driving unscathed through a cloud of smoke on the backstretch on the final lap of the second stage, Busch, the polesitter, took control of the race at the halfway point and beat Kyle Larson to the finish line by 2.641 seconds.

In winning for the third time this season, the third time at Loudon and the 41st time in his Monster Energy NASCAR Cup Series career, Busch led 187 of 300 laps at the 1.058-mile track and locked up a spot in the postseason Playoff's Round of 12.

But Busch had a close call when contact between Austin Dillon's Chevrolet and Kevin Harvick's Ford on Lap 150 turned Harvick sideways and lit up his tires. Kurt Busch plowed into the side of Harvick's car, followed by Jeffrey Earnhardt.

[adinserter name="GOOGLE AD"] The No. 78 Toyota of race leader and first stage winner Martin Truex Jr. was collateral damage in the wreck, as was the Chevy of Dale Earnhardt Jr., but the race winner slowed dramatically and squeezed between Harvick's disabled car and the outside wall to win the second stage under caution.

From that point on, Busch was in control, save for a three-lap stint late in the race when Truex took a short-lived lead with a two-tire stop under caution.

"That was pretty intense," Busch said of the wreck he avoided. "That was some ‘Days of Thunder' stuff over there. You couldn't see anything. It was just a wall of smoke over there off of Turn 2. I was listening to my spotter and basically was told to stop, and I was like ‘Sounds like a good idea.'

"I just checked up as much as I could. Of course, I was trying not to get run into from behind. I didn't know who was behind me – I knew (eventual third-place finisher) Matt (Kenseth) was there. But all in all, just a great day. We ran up front all day long, we executed, we did what we were supposed to do, and it's awesome to win here in the Granite State in front of these fans."

Busch wasn't the only driver to secure a spot in the Round of 12. Larson and fourth-place finisher Brad Keselowski also are assured of advancing on points. With Truex gaining the next round thanks to his victory in last Sunday's Playoff opener at Chicagoland Speedway, four of the 12 berths are taken.

Larson finished second for the eighth time this season.

"I kind of ran around third to fifth all race long," said Larson, who led Lap 77 under caution – the only lap not led by either Busch or Truex. "I felt like I wasn't great on short runs, but I was really good on long runs, which was kind of opposite of practice. I was kind of happy about that. Got a good restart there at the end, got to second, and kept my pace up with Kyle a little bit there.

"But he could just get pointed a little bit better than me and get the throttle down where I would spin my tires a little bit. Too loose there on the short run, but if we could have had a long run, maybe who knows? But he was fast, 78 (Truex) was fast, Matt (Kenseth) was really good, so I thought we were probably fourth best or so."

Truex finished fifth after falling to 17th after the Lap 150 wreck deprived him of the stage win. Non-Playoff drivers Erik Jones, Clint Bowyer and Daniel Suarez grabbed the sixth through eighth spots, respectively, followed by Ryan Blaney in ninth and Joey Logano in 10th.

Harvick finished 36th and fell to 10th in the standings. The news was worse for Kurt Busch, who had no margin for error. Busch ended the day in 37th place, dropping to 15th in the Playoff standings, 17 points below the current cutoff for the Round of 12.

Calamity also befell Kasey Kahne, who started the weekend with a new crew chief, Darian Grubb, and a ninth-place qualifying effort. But a broken rear suspension part sent Kahne to the garage for 11 laps and dropped him to 35th at the finish.

Kahne heads to Dover 16th in the series standings, likely needing a victory at the monster Mile to keep his title hopes alive in his last season behind the wheel of the No. 5 Hendrick Motorsports Chevrolet.

Is it nice to know you’re moving on to the next round of the Playoffs?

“It is and it’s just a testament to this team and everybody at Joe Gibbs Racing. I mean, it’s fun to drive these Toyota Camrys with how fast they are and, you know, it’s a great opportunity for us to put them in victory lane when we can, so can’t say enough about M&M’s and M&M’s Caramel, of course Interstate Batteries, Toyota, NOS Energy Drink and Cesna, DVX Sunglasses, Snickers, Skittles, all of our partners. It’s just a – it’s an awesome day for us and we always want to say that we’re remembering those that we’ve lost before us and Ted Christopher, who passed this week, obviously our thoughts and prayers are with his family and, of course, certainly want to say thanks to the fans and what they all mean to this New England area and being able to come out and support this track."

Was your son Brexton only about two months old last time you won here?

“Yeah, he (Brexton Busch, son) was – yeah, about two months old, so he was pretty young at that time and he’ll see a lot bigger one today and probably remember it today than what it was a couple years ago."

How were you able to be so successful in today’s race?

“Yeah, no, it was just a great day for our team and for the 18 team we were able to execute all day long and we did everything right. We did everything we were supposed to do and that’s where you end up when we’re able to do those things and it was a great race up front too with the 78 (Martin Truex Jr.) there. The 20 (Joey Logano) was there for a little. I think he was a little better on that long run that one time, but overall we had some really good short run speed there at the end. We were able to get out front there and kind of set the field because – set the pace – and that was what we needed to do today."

How does it feel to win in the Playoffs?

“It feels great. This is what it’s all about, you know? We’re supposed to do these things and it feels even better when we can do those things and, you know, we’ve missed out on a lot of opportunities I feel like this year, but today we were able to execute all day long. We were able to get the things that we needed done done and can’t say enough about our M&M’s Caramel Camry, you know? This thing was fast, so thanks Interstate Batteries, NOS Energy Drink, DVX Sunglasses, Cesna, the fans and support this area, this race track and everything and for us to be able to run up front all day long with the 78 (Martin Truex Jr.) car, that was good. We kind of kept pace with him. I know he had his issue over there on the backstretch. That was a close call for a lot of us, but thankfully we were able to get through that one."

Could you see anything in the accident?

“No, when I was coming up on it I saw the 33 (Jeffrey Earnhardt) in front of me checking up trying to slow down and I was just checking up and trying to get slowed up as much as I could and Tony (Hirschman, spotter) pretty much said stop, you know, and it seemed like the track was plugged up and, you know, you had to go so low to miss it, but it was so late in the game before I could dedicate myself down there that I couldn’t do that, so we made it work though."

Were you worried on the last restarts?

“You’re always concerned. I mean, definitely those are the things that mess you up or take your opportunity for victory away and just had to be – you had to do a good job and I had to make sure that I did everything right and don’t spin the tires, don’t mess up, don’t go too early, don’t go too late – all those sorts of things – and it just kind of worked in our favor there. We obviously restarted next to (Martin) Truex (Jr.), got the lead right off of that restart and they kind of waded up behind us obviously causing the yellow and that just allowed us to have control of the race there after with our fresh tires, so that was probably the key to the race and being able to control the rest of it."