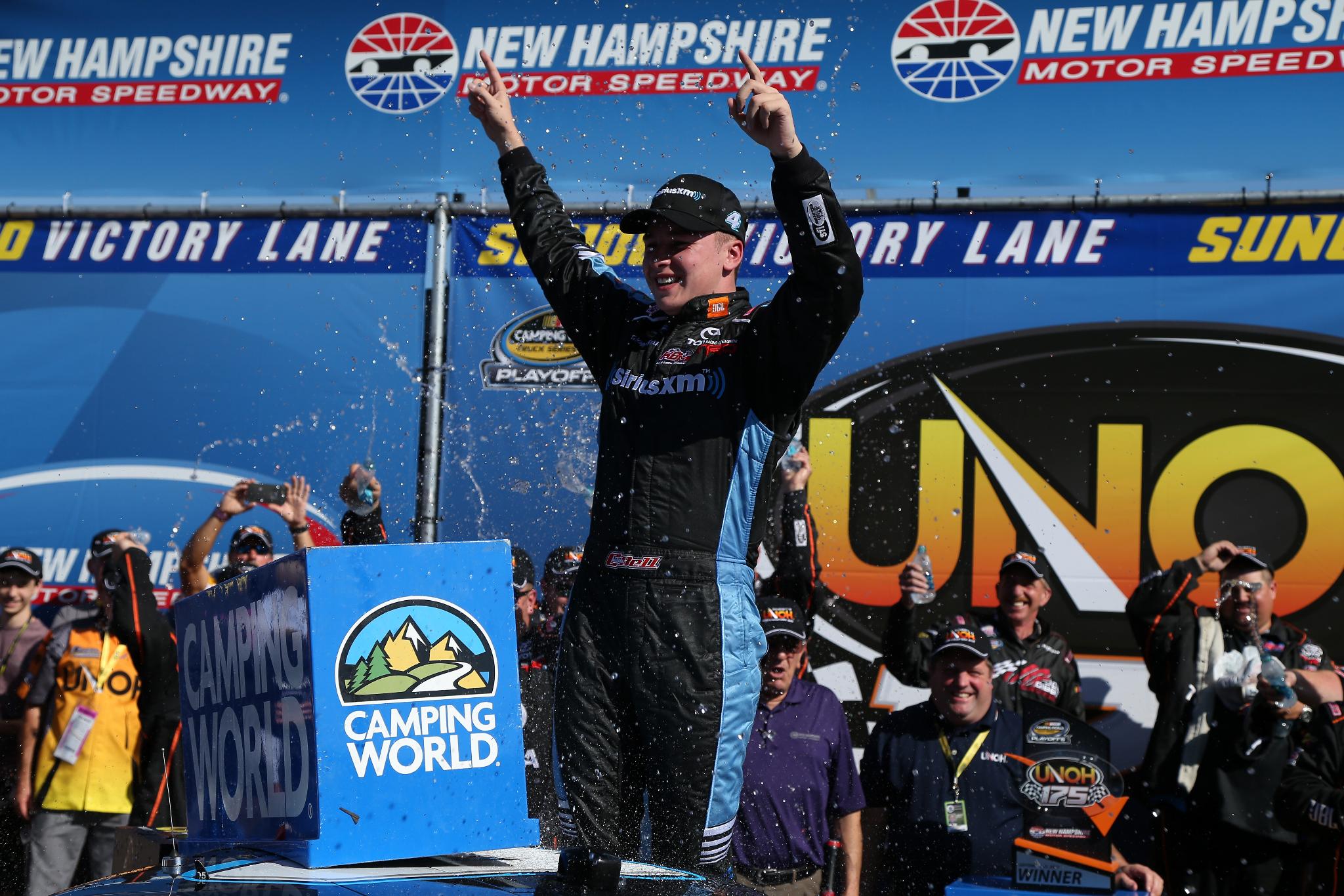 The top seed in the series Playoffs, Bell won the first two stages of the opening postseason event and took the checkered flag 1.248 seconds ahead of runner-up Ryan Truex to notch his fifth victory of the season.

The win earned Bell automatic advancement into the second round of the Playoffs, gave him an additional seven playoff points to bring his series-leading total to 47 and widened his advantage over the seven drivers chasing him for the title, given that no other Playoff driver finished in the top five at the 1.058-mile track.

With all that said, the victory wasn't a foregone conclusion for the driver of the No. 4 Kyle Busch Motorsports Toyota. Truex powered into the lead past Ben Rhodes after a restart on Lap 132, following a caution called when Kaz Grala knocked the Ford of Austin Cindric sideways in Turn 4 on Lap 126.

Bell patiently stalked Truex for 28 laps, as Truex positioned his no. 16 Toyota to block the line of the series leader. Finally, on Lap 160 of 175, Bell got a strong run off the second corner and buried his Tundra into Turn 3, shooting past Truex into the lead.

"He was doing a really good job of watching his mirror," Bell said of Truex's effort. "I knew it was tough to pass all day, but our truck had been so good, we had been able to do it until we got to him.

"I kept trying to work down, and he kept blocking my air down and down and down. Finally, I got one run where I drove up in (Turns) 1 and 2 and then got a big run into 3."

In fact, Truex was surprised he was able to keep Bell behind him for 28 laps.

"When you've got the best truck in the field behind you, it makes it tougher," Truex said. "I did everything I could to hold him off. I was trying to take his lane and block and everything – I just didn't have quite the grip he had.

"I didn't know how this race would shake out. Every restart, I just gave it my all – a lot of three-wide stuff, probably (ticked) a few people off. But we're trying to win races, and we're getting closer."

Bell, who won for the first time at New Hampshire and the seventh time in his career, leaves the Magic Mile with a whopping 40-point lead over second-place Johnny Sauter, the defending series champion. Sauter finished ninth on Saturday after polesitter Noah Gragson spun in Turn 4 on lap 64 and caved in the right side of Sauter's No. 21 Chevrolet between the front and rear tires.

With the Playoff field to be trimmed from eight drivers to six at Talladega two races from now, John Hunter Nemechek and Chase Briscoe fell below the cut line. A rear gear failure sidelined Nemechek for 36 laps, and he finished 20th to drop to eighth in the standings.

Briscoe fought handling problems throughout the afternoon and finished 11th, dropping to seventh in points, three behind Grala, who came home 10th.