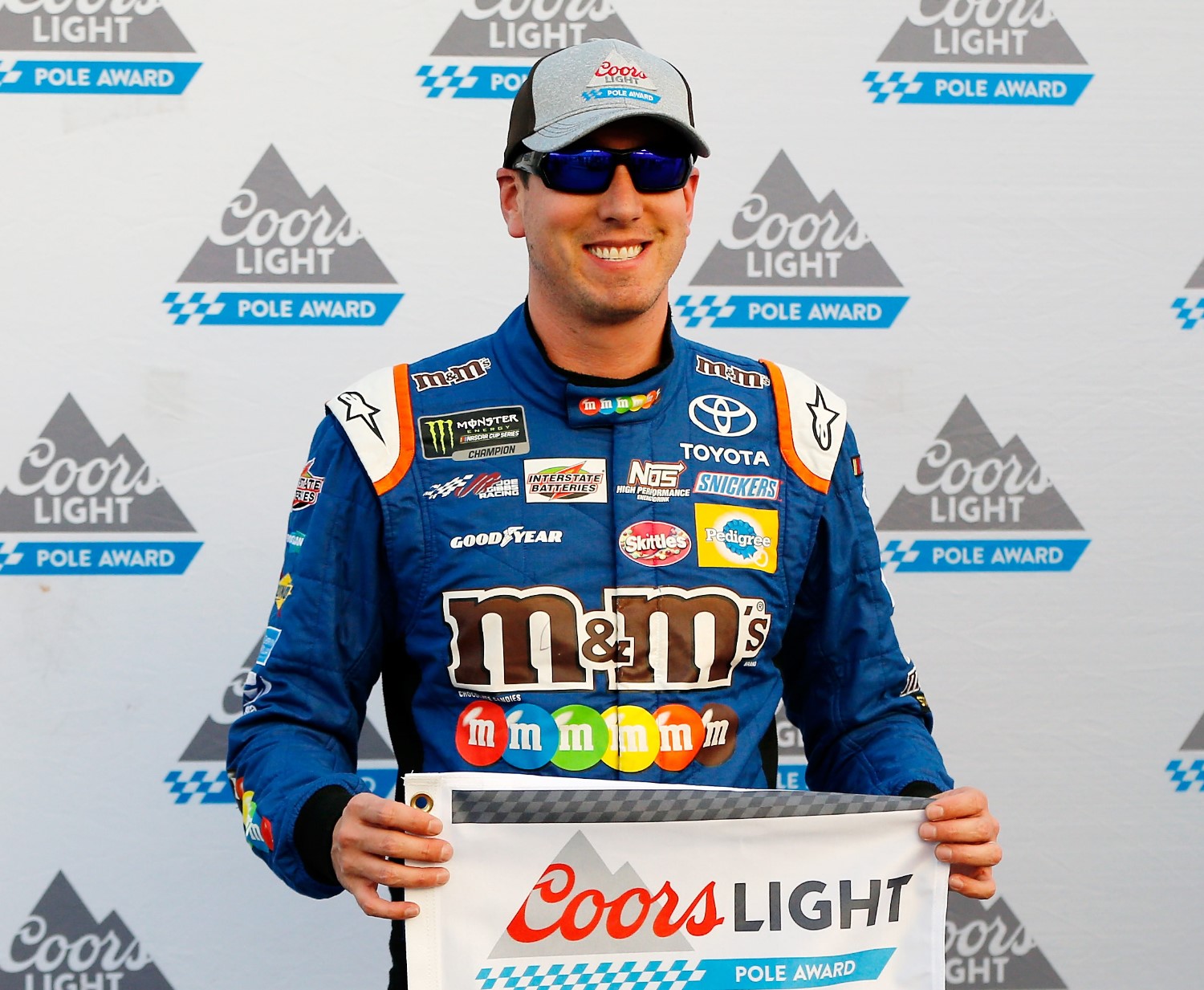 Kyle Busch went from the top of the chart to near disaster and back to the top again in winning the pole position for Sunday’s ISM Connect 300 at New Hampshire Motor Speedway (2 p.m. ET on NBCSN), the second race in the Monster Energy NASCAR Cup Series Playoff.

After posting the fastest lap in the first round of knockout qualifying at the 1.058-mile track, Busch missed his mark entering Turn 1 in the second round and narrowly averted a session-ending crash into the outside wall.

[adinserter name="GOOGLE AD"]The Coors Light Pole Award was Busch’s third at New Hampshire, his eighth of the season and the 27th of his career. Busch also started first on the grid for last Sunday’s Playoff opener at Chicagoland Speedway.

“I didn’t think I hit it very well, actually," Busch said of his lap in the money round. “I was going to go out and run my second lap and try for a little bit more, but I slipped off of (Turn) 2 really bad, so I just had to abort. It definitely wasn’t going to be any faster."

Busch acknowledged he was fortunate to keep his car intact after the slip in Round 2 that resulted from trying to keep his left-side tires in contact with the PJ1 traction compound that had been applied to the track.

“I gave myself too much room on my left sides, trying to keep ‘em in the black on entry, and it was like half a car too wide to the right," Busch said. “I was nervous.

“I thought I was 48 and 24-ing there for a second (a reference to crashes in first practice by Jimmie Johnson and Chase Elliott), but I was able to hang onto it, surprisingly, and battle through on the backstretch and ease her off into (Turn) 3 and build my lap back up heading to the start/finish line."

What was the secret to today’s pole?

“Same as it is every other time – you’ve got to have a fast car, so, you know, certainly feels pretty good to capitalize on another good Friday and we just need to somehow figure out how to turns these things into good Sundays, you know? Being able to start up front, it’d be nice to stay up front all day and limit our mistakes and not have any of those and be able to carry on and go to victory lane on Sunday. So this is a good place for us and the weather is going to warmer – more like a July race – and we run better here in July than we typically do in September, so hopefully that will bode a little bit for us in the 18 car this weekend."

Are you doing anything different in qualifying this year that has led to more success?

“I mean every week is different, so you always try to capitalize on your strategies through the rounds, you know? Some rounds have worked out better for us than others. When we were here in the spring, we made some mistakes actually in qualifying – we didn’t qualify very well – and so we went the opposite way today and it seemed to work, you know? So definitely things have kind of just bode well for us and gone our ways on Friday and it shows that we can do it, we can have the speed and we can do what we need to do to be first one of the days. We just need to be able to do it on Sunday."

How did the additive feel on the track today compared to July?

“Friday July to Friday today, there’s more of it because the grooves are wider. They didn’t make it this wide until Saturday I believe and, you know, felt fine. Felt normal. Actually felt like it wore off a little bit faster today than it did in the spring time here, although we had I think more modified on-track action in the spring time, so those guys definitely pick it up and peel it off, so I don’t know if they’re going to reapply tonight or if they’re going to wait until after the Truck race or what, but definitely just as the day worn on it didn’t seem like it was quite there as much, you know? It’s weird – for some reason here, you know, it seems to pull it off rather than take rubber and put rubber on the race track it seems to pull the PJ1 off the track, so there’s really no rubber going down."

How did you get your tires clean in Round 2 after getting into the junk?

“I don’t know. Just do it, you know? When that happened, I gave myself too much room on my left sides trying to keep them in the black on entry and it was like half a car too wide to the right. I was nervous. I thought I was 48 (Jimmie Johnson) and 24-ing (Chase Elliott) it there for a second, but just was able to hang on to it surprisingly and was able to battle through on the backstretch and just ease her off into (Turn) 3 and then build my lap back up getting back to start-finish line, so it all worked out and, again, guys gave me a great piece. So knew we were going to have a shot for the pole – just wasn’t sure if we could get it and for ugly as that session looked or felt from my vantage point, it certainly worked out."

Is there anything crew chief Adam Stevens has to do to integrate your new crew guys?

“No, I don’t think there’s any adjustments to be made. You know, unfortunately, last week just didn’t quite work out the way we all would have hoped and expected to. Even if they would have been mediocre stops, it would have probably been alright rather than loose wheels and pit road penalties, so we definitely can’t have those issues again this weekend and can’t have speeding on pit road like I had here in the Spring, so that’s kind of been a little bit of our issue I guess, so clean that up and stay out front and not have any problems and you might win one."

How were the tires wearing during that session and did that result in the slower second laps?

“I don’t think the tires were wearing much. I think it was just mostly based off of heat and the track, heat and the tire and what your air pressures were set at – whether you thought you were going to be better on one lap or two laps – and for us fortunately we were better on that first lap. I messed up the second lap. Thought we were going to have a faster second lap, but, you know, didn’t make it all the way through Turn 2, so we just aborted that one."

REALLY GOOD QUALIFYING RUN OUT THERE HOW WAS IT FRO YOUR PERSPECTIVE?
“Yeah, it was a good effort for our Target team. One lap in the first round, one lap in the second round. I knew we would have a good shot at the pole for the final round. I felt like I ran a pretty good lap my first lap. Maybe I could have found a few tenths more, but overall, I felt like I hit my lap pretty good, but Kyle (Busch) was quite a bit faster than us throughout qualifying, especially that first round. But, yeah, it is a good starting spot for us on Sunday. I got the pole here earlier in the year, but didn’t get to start from up there and had to come from the back and pass a lot of cars, so hopefully, we can just maintain our track position this time around and get another good finish. A win would be great, but just some stage points and a top five or top 10 would be good."

HOW WAS YOUR CAR IN RACE TRIM TODAY? DO YOU FEEL LIKE YOU GUYS ARE SET-UP WELL FOR THE WEEKEND ASIDE FROM JUST THE GOOD QUALIFYING SPOT?
“Yeah, I thought our car in race trim was really good. All the (Joe) Gibbs (Racing) cars I don’t think were in race trim ever, but I was a couple of tenths faster than the other people in race trim at the time. So, I think we are good, but we will get a better idea tomorrow morning and then into Happy Hour as well. I think we unloaded exactly how we race. We know we will be in the ballpark we just have to fine tune it a little bit, probably."

What happened between Turns 3 and 4?

“Just got a little bit tight. I had a few more laps on my tires as well as those other guys, but overall still three top-three starting spots in a row. I mean, things are going well. We’re running well. We’re putting ourselves in positon to win each week and that’s pretty much all we can ask for. We’ll race her from there and see how it goes."

Are you more confident here after winning in July?

“You know, we didn’t have the best car in July, but we definitely executed the best and, like I say, people have been saying for a long time, right, that you get to the top-five and then it’s all about execution and so I think that we’ve been executing really well for the last three months and hopefully we continue that trend."