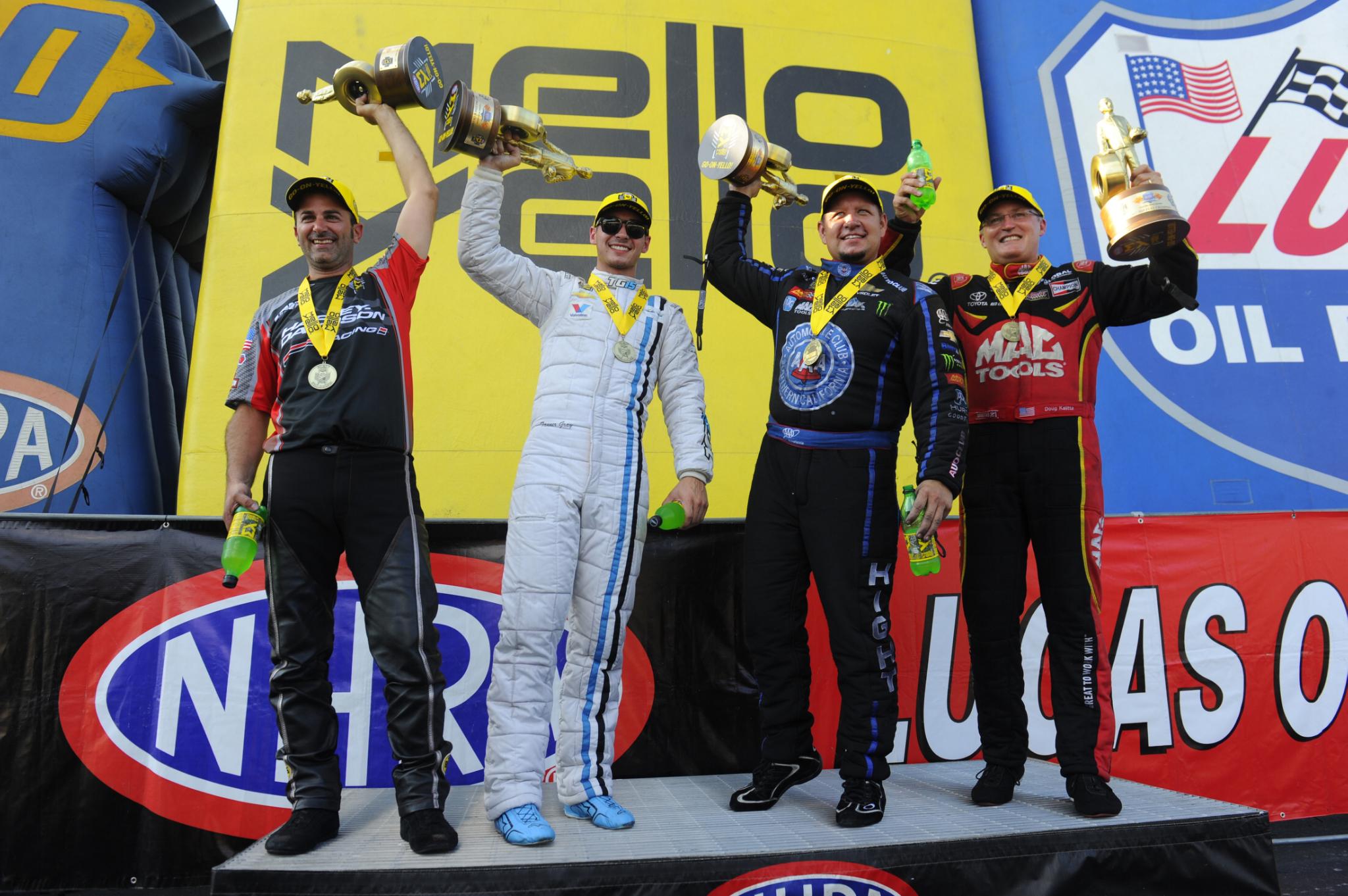 The opening event of the six-race Countdown to the Championship pitted teammate versus teammate as three of the four final rounds came down to all-teammate battles to decide the winners in the 10th annual Carolina Nationals NHRA Mello Yello Drag Racing Series event at zMax Dragway in Concord, N.C.

Doug Kalitta (Top Fuel), Robert Hight (Funny Car) and Eddie Krawiec (Pro Stock Motorcycle) all picked up victories over their teammates in the money round while Tanner Gray picked up the win in Pro Stock as the top spots in the Countdown standings were all up for grabs.

Kalitta beat out Chris Karamesines, Tony Schumacher and Clay Millican in the opening rounds, while Crampton took down Scott Palmer, top Countdown seed Steve Torrence and Brittany Force to reach the finals in just his second start of the season.

In the final, Kalitta was first off the line by a hundredth of a second and quickly opened up a gap as Crampton started dropping cylinders at the halfway mark, crossing the line with an ET of 3.775 seconds at 318.39 mph over Crampton's 3.876, 306.40.

It was the first win of the season for Kalitta and in his third final-round appearance of the season and the 43rd of his career, and pushed him to the top of the Countdown standings by 14 points over Torrence.

"Getting this win gives us great momentum with only five races to go, but with the team I have with me I'm full of confidence," Kalitta said. "It's huge for me to get my first win at this great facility, because we have been coming here for a lot of years and I couldn't be happier with how it turned out."

"Richie (Crampton) was killing it with the Countdown cars; I think he took down three of the Countdown cars. We definitely tore up a lot of parts (On Crampton's car), but we were like "well, we're taking out Countdown cars here, that's gotta be worth something, right?' Kind of a crazy way to justify things, but it's drag racing. Sometimes you go out early and it sucks, but we were fortunately we got the win here today."

The Funny Car final was another battle between teammates as Courtney Robert Hight beat out Courtney Force in the money round for his third trip to the Winner's Circle this season.

Meeting in the final round for just the second time, Hight had the advantage at the start and was already a second ahead at the halfway mark, hitting the win light with a 3.943 at 328.86 mph over Force, who dropped slowed after dropping a cylinder to finish the day with a 3.980, 315.19.

With the victory, Hight takes over the points lead by 44 points over Ron Capps, who had entered the weekend as the number one seed.

"This is awesome and this is how you dream about starting the Countdown. This was a big day for us. We lost lane choice to Courtney (Force), but (crew chief) Jimmy Prock said ‘this thing will go' and it did.

Pro Stock featured the only final round wasn't an all-company affair as North Carolina native rookie Tanner Gray collected his fourth-career Wally and the series points lead with a win over hometown favorite Greg Anderson.

Gray and Anderson entered the weekend second and third in points behind Bo Butner with the winner of the final round going on to take sole possession of first place in the division.

Gray, who entered the day as the No. 1 qualifier, bested Val Smeland, Erica Enders and defending event winner Jason Line to draw Anderson in the finals for the first time in his career. Anderson had defeated Alan Prusiensky, Drew Skillman, and series points leader Bo Butner to reach his eighth final round of the year and his fifth at zMax Dragway, where he's currently tied for most victories with three zMax wins.

"If you would have told me I would be the points leader when I left the first race of the Countdown I would have said you were crazy," Gray said. "I have a great team who has helped me throughout the season and we are really happy with where we are at."

In Pro Stock Motorcycle, Vance & Hines Motorsports teammates Eddie Krawiec and Andrew Hines found themselves in familiar territory after facing each other in the finals for the 20th time in their careers and second time this season, with Krawiec coming out on top to win his second race in a row following his victory two weeks ago in the U.S. Nationals in Indianapolis.

In one of the most evenly matched finals of the day, Krawiec and Hines left the tree within two one-thousandths of each other but Krawiec had the advantage off the start and held on to pick up the victory with a pass of 6.850 at 196.87 mph over Hines, who ran 6.911, 195.11.

It was the fourth win of the season for Krawiec and 40th of his NHRA career, and earned him the no. 1 spot in the series points standings by 48 points over LE Tonglet.

"To me, this is actually a bigger one (to win than the U.S. Nationals)," said Krawiec. "I enjoy racing at Charlotte. I love this drag strip. This is a beautiful place and the Smiths do nothing short of spectacular.