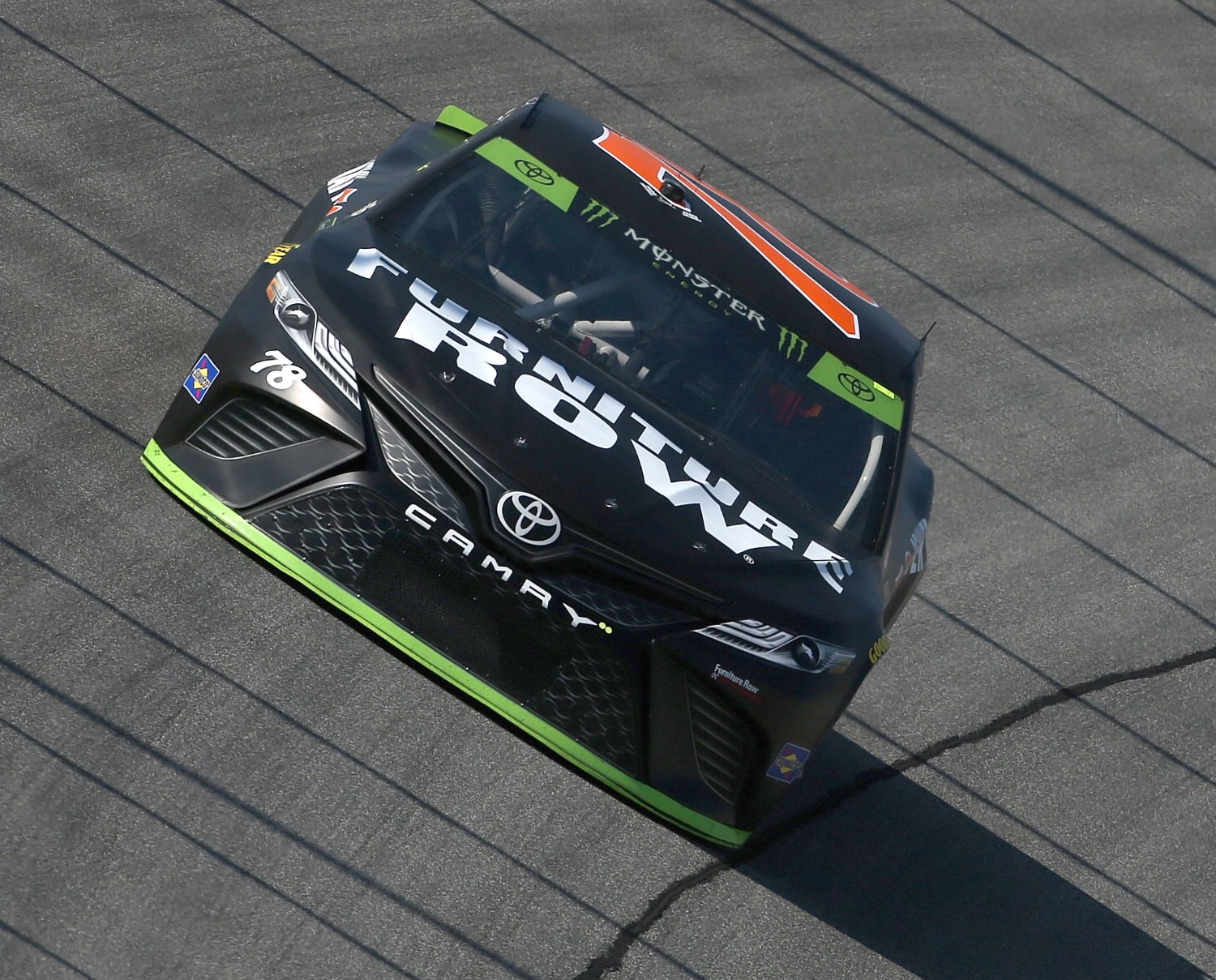 Truex Jr. would not be denied victory for the third week in a row.

After losing heartbreakers the past two weekends in the closing laps in Darlington, S.C. and Richmond, Va., the Furniture Row Racing driver roared back Sunday in NASCAR’s playoff opener with a dominating victory in the Tales of the Turtles 400 at Chicagoland Speedway.

He drove his No. 78 Furniture Row/Denver Mattress Toyota Camry to a 7.179 second margin of victory over second-place Chase Elliott. Truex led the second most laps (77) and led all but one lap in the final 78 laps of the race.

Truex’s victory, his second straight at Chicagoland, had both personal and professional significance for the Mayetta, N.J. native. The win automatically transfers Truex into the second round of the NASCAR playoffs.

Truex survived a tumultuous day for postseason contenders to score his fifth win of the season, his second straight at the 1.5-mile Illinois venue and the 12th of his career in NASCAR’s premier series. His Furniture Row Racing No. 78 Toyota was 7.179 seconds ahead at the finish, sealing a victory that clinched automatic advancement into the Round of 12, the next phase of the Playoffs.

Chase Elliott led 42 laps and finished second in the Hendrick Motorsports No. 24 Chevrolet as Playoff-eligible drivers swept the top six spots. Kevin Harvick, Denny Hamlin and Kyle Larson completed the top five in the first of 10 races that will decide the series champion.

Several of the 16 championship-eligible drivers faced uphill battles because of early miscues, most notably title favorites Truex and Kyle Busch.

Truex’s issues set in midway through the 80-lap first stage, when his No. 78 Toyota was tagged for speeding on pit road. He rallied back into the top 10, but was forced to make an extra pit stop during the intermission after Stage 1 for his crew to tighten unsecured lug nuts.

[adinserter name="GOOGLE AD"]Truex steadily chipped away at the deficit, taking the lead for the first time on Lap 190.

Busch’s early trouble came after he set a torrid pace from the drop of the green flag, leading 78 of the first 80 laps to win Stage 1. The Coors Light Pole Award winner’s rapid clip left just 12 cars on the lead lap, but he made an unscheduled pit stop out of second place on Lap 94 for a loose right-rear wheel.

Busch’s problems were compounded when the Joe Gibbs Racing No. 18 crew was penalized for going over the wall too soon. The pair of mistakes knocked Busch to 29th place, two laps down in the running order. He rallied to finish 15th, trapped one lap down for the balance of the race.

Other Playoffs contenders weren’t immune to pitfalls, whether in the pits or on the track. Ricky Stenhouse Jr. scraped the wall on Lap 26, then added a pair of pit-road penalties — one for his crew over the wall too soon and a late one for speeding. Jamie McMurray rallied back to finish 10th after a spin on the first green-flag lap of Stage 3. Austin Dillon and Kurt Busch were also included on the list of drivers serving penalties for speeding on pit road.

The series’ next event is scheduled for Sunday (2 p.m. ET, NBCSN, PRN, SiriusXM) at New Hampshire Motor Speedway. The Round of 16, the opening three-race leg of the Playoffs, concludes Oct. 1 at Dover International Speedway.

How were you able to rebound and win at Chicagoland?

“Yeah, this is awesome man! I’m so excited. This is what it’s all about. This team is unbelievable. Thanks to all of the fans for coming out – we love coming to Chicago. I’m proud of everybody. The speeding penalty, I thought oh no after last year we had to come from the back. The car was amazing and we had to keep digging and fighting and just did what we always do."

Are you relieved to win the first Playoff race?

“It feels great, the best feeling in the world. Not just the playoffs, but winning races and doing it the way we’re doing it right now. I’m just blessed to be here and I have the best team in the whole world and I love those guys. I’m glad I’m driving for them and glad we’re having success."

Are you making a statement by winning this first Playoff race?

“I don’t care much about statements, I just I’m just having fun. I’m proud of our pit crew for doing what they did and everyone on this team. It’s important to come here and not let the pressure get to you and I think we did a good job of that. Every time you go to victory lane, it’s special. There’s just so many people to thank. I’m kind of speechless, but Barney (Visser, team owner), and everyone at TRD (Toyota Racing Development) in Costa Mesa building great engines and TRD Salisbury – Bass Pro, Tracker Boats – just everyone, thank you so much. It’s a dream come true and we’re having the time of our lives."

What does it mean to win in September?

“I can’t even tell you how much it means to me. I’m a much better driver because of (Sherry Pollex), and what she taught me. We’ve learned a lot about life together. We continue to face every challenge head on and not skimp and we live every day just like we want to and we have fun. I’m proud of her and very proud to have the teal and gold in the race car and thankful for the other 28 guys who have done it. I’m thankful for all that and everybody."

This is a statement you’re making for charity?

“She reminds me every time we have a bad day, it’s not so bad."

How were you able to rebound to a victory after the day didn’t go your way initially?

“I wouldn’t say it wasn’t going our way, we just screwed up and I just made a mistake and left pit road .06 of a mile per hour too fast and got busted. Then just had to play catch-up, but our car was off a little bit that first half of the race as well and once we got back in traffic we really had to work on it. Cole (Pearn, crew chief) made some great adjustments and we just kept working on it all day long. Those last three runs it was dialed in man. Of course we got up front too. Just proud of everybody and thankful to all the fans that came out for this deal and all of our sponsors that make this possible. This is awesome to kick off the Playoffs this way – you come out here and everybody wants to talk about pressure. We knew what we could do, we just had to keep all that pressure behind and keep our heads on straight and do what we always do and at the end of the day, we were able to do that. Just proud of everyone and thankful for a good day."

How hard was it to come back up to the front?

“It wasn’t that hard with the car we had, that’s what makes the difference, I’m able to just get in there and focus and drive the thing. There’s only so much you can do so you have to stay focused on the task at hand, keep your head down and keep digging and try not to make mistakes. It worked out for us today."

What type of statement does this make to the rest of the Playoff field?

“I don’t know, I don’t really worry too much about that, I’m just enjoying this and enjoy victory lane with my team. I’m not sure if I like the slime just yet. It’s pretty awful, but we’re not here to make a statement, we’re here to have a good time and enjoy ourselves and do what we know we’re capable of. Today was a success and we will go out there next week and try to do it again."

How does this feel to win with your steering wheel in the car?

“This is the second time, last time we got $100,000 for that wheel. We’ll see if we can get that again. To be able to create awareness for our foundation for Ovarian and Pediatric Cancer is amazing. We’re so honored that all of the other drivers decided to be a part of this. It’s been a really cool month for us and we’re going to continue to fight for women who are like me and fighting. You can go to Auctions.NASCAR.com to bid on the wheel, too."

How are you feeling?

“Yeah, I had treatment a couple weeks ago and I feel really good. I have a couple more rounds and we’ll see how this goes and keep fighting for all the other women out there."