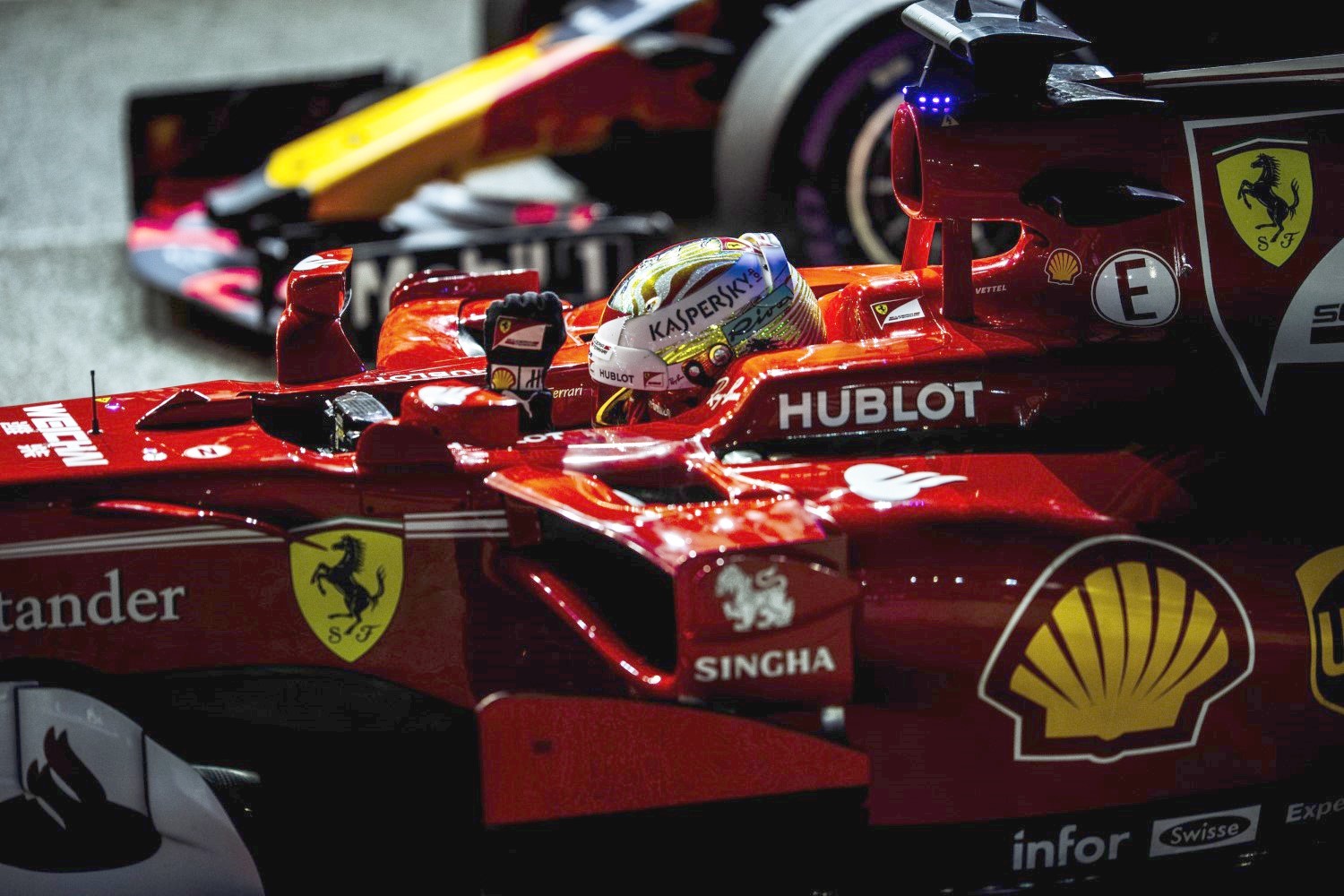 The Red Bulls were fastest in both sessions Friday and the final practice on Saturday morning, but when it really counted Sebastian Vettel drove his Ferrari to pole with a record lap of 1m39.491s for the Singapore GP. His time was 3-seconds under the lap record.

Vettel had pole when all the drivers went out for their final run, but no one could catch Vettel, who went even faster on his final run but did not have to.

Max Verstappen was 2nd for Red Bull 0.323s behind Vettel and his Red Bull teammate Daniel Riccardo was right behind 0.349s back.

Q1 accounted for both Williams and both Saubers. At the former, Felipe Massa and team mate Lance Stroll had heavy contacts with the wall, while at the latter Marcus Ericsson’s expected five-place grid penalty for a gearbox change (needed after his FP3 shunt) will have little effect on his P20 qualifying position. The other man eliminated in the opening phase was Haas’s Kevin Magnussen.

For a while in Singapore on Saturday evening it looked as though Max Verstappen was set to become F1’s youngest ever pole sitter. That was until the man who holds that record – Ferrari’s Sebastian Vettel – stormed to his fourth P1 qualifying at the Marina Bay Street Circuit.

Red Bull looked like the team to beat in practice, but Vettel turned up the pace in the final session of qualifying and crossed the line with a 0.323s margin over Max Verstappen in second. Daniel Ricciardo had to settle for third, just 0.026s off his Red Bull teammate, but will start ahead of the second Ferrari of Kimi Raikkonen in fourth. After another difficult session under the spotlights of Singapore, championship leaders Mercedes were relegated to the third row of the grid, with Hamilton 0.635s off Vettel and Valtteri Bottas over 1.3s off pole.

Vettel's advantage over the Red Bulls lay in sectors one and two, but may have extended to sector three had he not clipped the wall on the exit of Turn 19 on his fastest lap. Fortunately for Vettel he escaped the collision unscathed bar a scuffed wheel rim and went on to complete one of the standout qualifying performances of his season. It will have been made all the sweeter by Hamilton's struggles, with three cars — including Vettel's teammate Raikkonen — separating the championship rivals on Sunday's grid.

Once again, Mercedes will be left scratching their heads after qualifying in Singapore, which has proved to be a bogey circuit for the team throughout the turbo hybrid era. The race pace of the Red Bulls and Ferraris both looked competitive, and with no changes allowed on the cars ahead of Sunday's race, Hamilton and Bottas will have their work cut out to move up the order.