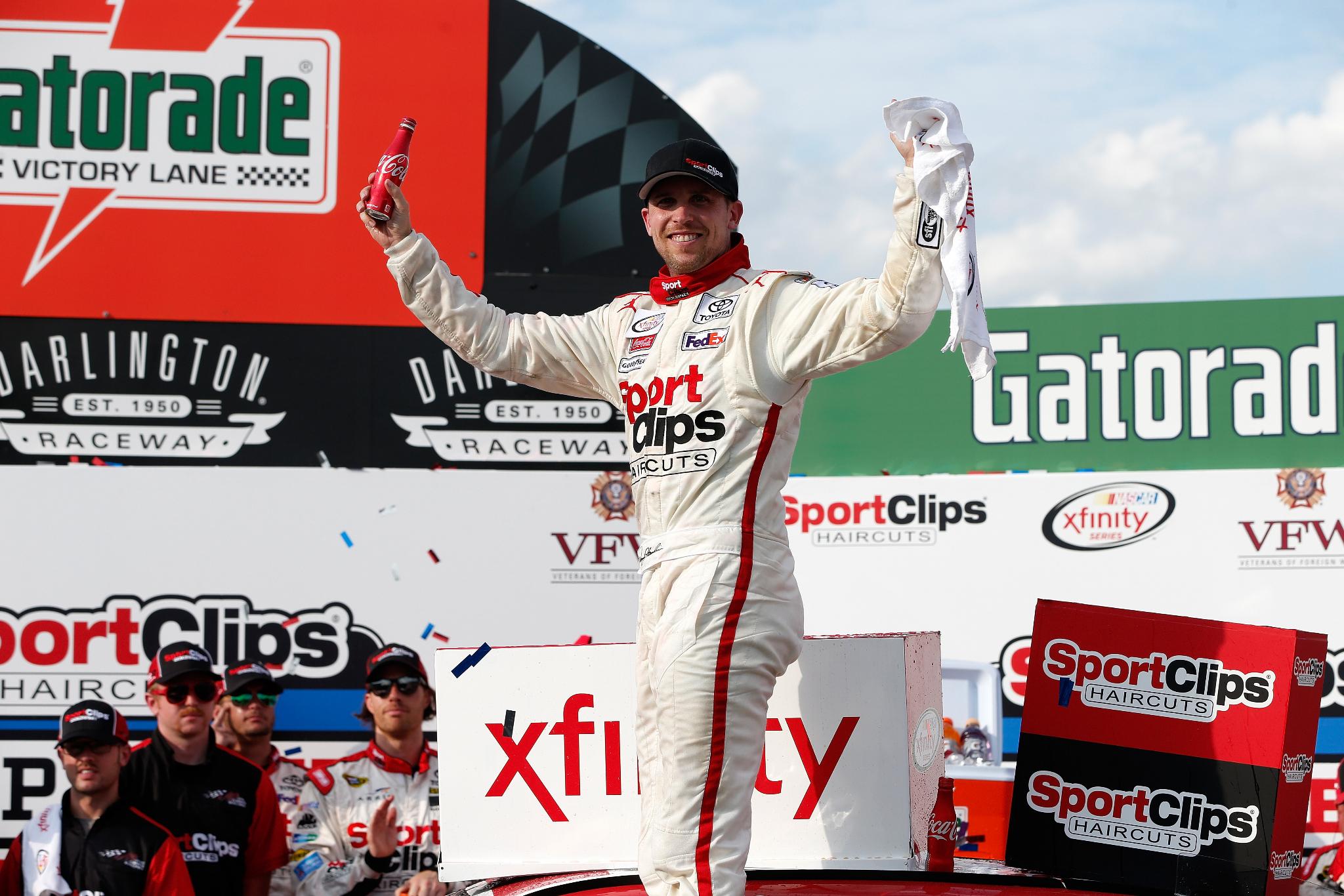 On a throwback weekend at Darlington Raceway, Denny Hamlin reached into the playbook of the late Dale Earnhardt, Sr. and pulled out a throwback cross-over move on Joey Logano on the final lap of Saturday's Sports Clips Haircuts VFW 200 to score his fifth Darlington Xfinity Series victory.

Hamlin jumped to the lead on a restart in a three-lap overtime shootout , ducking under Logano going into turn one, but Logano fought back and pulled even with Hamlin coming to the white and overdrove the car into the corner, allowing Hamlin to dive to the inside to steal the victory.

Hamlin's victory was his second in his last three Darlington starts and his fifth Darlington victory overall – all from the pole position.

"I think I threw it back to the old Dale Earnhardt there in Turns 3 and 4," said Hamlin. "We definitely didn't have the best handling car in the beginning of the race. We got it better there at the end.

"I actually was hating it when that caution came out because I thought I could run down (Kevin Harvick). We made it a little bit more exciting."

At the start of the final stage, Logano won the race off pit road and got the jump on Harvick to take over the top spot, leading the next 25 laps.

On lap 118, Harvick powered past Logano to take the top spot and started to pull away from the field, opening up a 1.4-second lead as Hamlin overhauled Logano to take second.

A caution flag with 11 laps to go for Dakoda Armstrong brought the field to pit road for a final round of pit stops, with Logano winning the race off pit road, followed by Harvick, Hamlin, Jones and Elliott Sadler.

Sadler, who was looking to clinch the regular-season points championship, ended up spinning off the bumper of Erik Jones with two laps to go, ending him to the garage and setting up the field for an overtime finish.

Coming to the green flag for the final dash to the checkers, Hamlin restarted inside of Logano and got a big push from his Joe Gibbs Racing teammate Erik Jones and cleared Logano coming out of turn two to re-take the lead.

Logano wasn't about to let a victory slip away, and quickly reeled Hamlin on the white-flag lap, looking to the low side on the backstretch.

Coming through turn four on the final, Logano dove into the corner and overpowered his Ford Mustang, which slid up the banking directly in front of Hamlin, who did a quick jerk of the steering wheel and dived back down underneath Logano and moved back in front by the time they reached the flagstand, beating Logano by inches at the line.

Following the race, Logano said trying to overpower Hamlin in the final corner was the only card he had to play.

"It's either that or wreck each other. It's one or the other," said Logano. "He knew my play. I knew his play. He knew I was gonna slide up. That was kind of the only one I had, so he checked up and turned down underneath me. I was hoping I would get to the wall and carry some momentum. Maybe I should have just kept it to the wood and rode the wall, I don't know, but overall I guess second always stinks, but probably a pretty good finish considering where we were in practice and where we qualified.

"We maximized our day. I just wish it was a win."

Hamlin, too, said he knew he had an advantage over Logano going into the final corner – he just need the right time to make his play.

"I knew going down the backstretch that he was going to have inside position," said Hamlin. "It was up to me then to back up the corner, let him slide up the race track and slide back around him on the exit, so it takes a lot of patience, but glad it all worked out for us."

Harvick’s third-place finish was his fifth top-five finish in his first six Xfinity Series starts this season and his career-best series finish in 15 Darlington starts.

Harvick was the odd man out after the finding himself mired in fifth place after the final round of pit stops and then got “freight-trained" on the restart and couldn’t fight his way back to mount a challenge on Hamlin.

"It just didn't wind up working out there at the end," Harvick said. "I wound up on the bottom, and I kept my foot in it over there, got loose underneath the 20 (Erik Jones). We weren't the strongest for five or 10 laps, and that didn't really work out with that short run there at the end, and we got stuck on the bottom.

"We got loose and then we got freight-trained, but just a great car. It wound up being a great race, and that's all you can ask for."

Byron’s fifth-place finish allowed him to gain a little ground in the points battle over Sadler, who finished 33rd after crashing out of the event, and now leads Byron by 91 points.

Brennan Poole, Ty Dillon, Justin Allgaier, Cole Custer and Austin Dillon made up the rest of the top ten finishers.