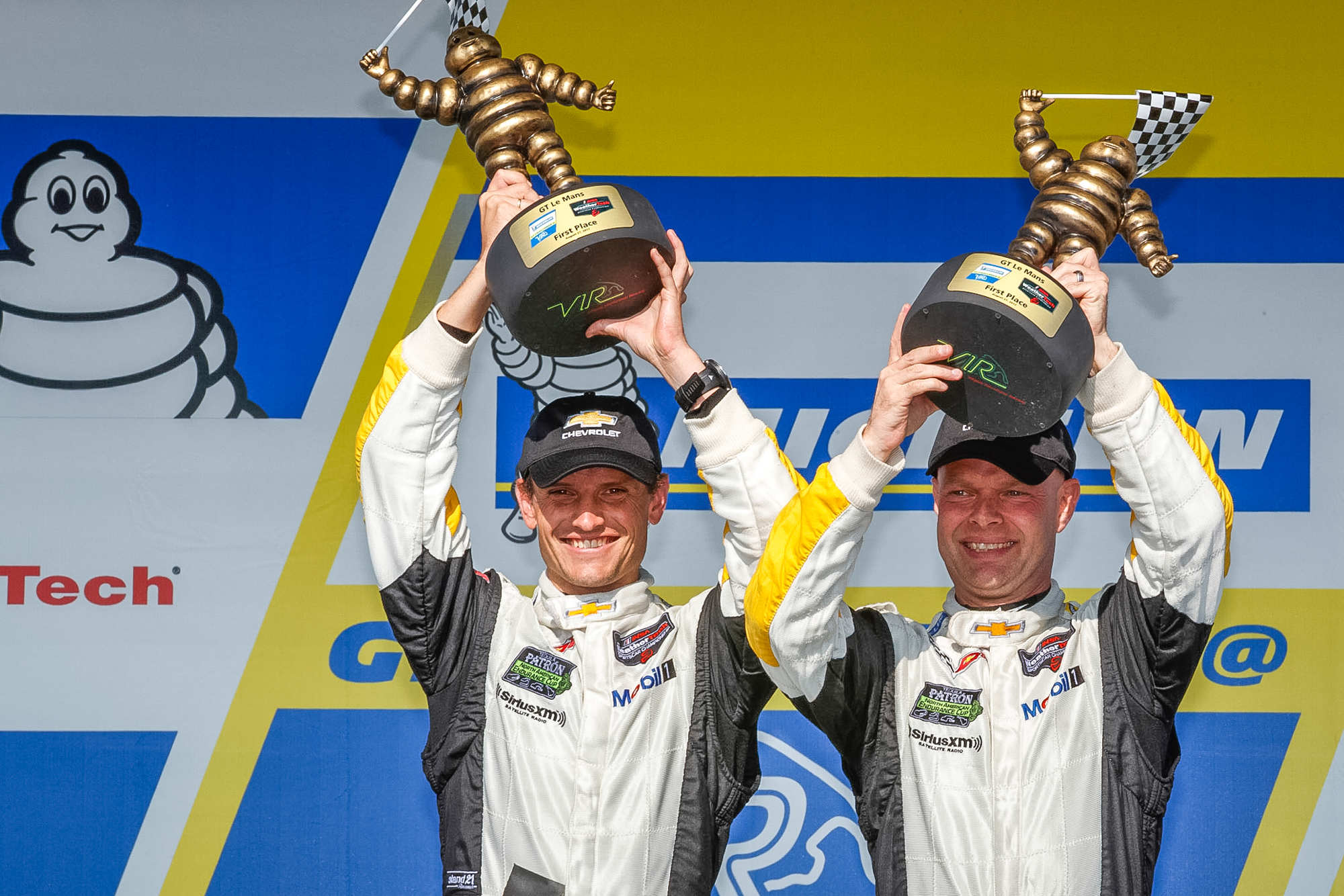 ALTON, Va. – Every championship season in every sport has at least one "turning point." It’s the moment a championship-winning team looks back on and identifies the time when the championship was firmly in their grasp.

There’s still plenty of racing left in the 2017 IMSA WeatherTech SportsCar Championship – two races that total 12 hours and 40 minutes of competition to be exact – but Sunday’s Michelin GT Challenge at VIRginia International Raceway could very well be that turning point for the No. 3 Corvette Racing Chevrolet Corvette C7.R team and co-drivers Jan Magnussen and Antonio Garcia.

Magnussen and Garcia scored a somewhat unlikely win – their third of the season – and expanded their lead in the GT Le Mans (GTLM) point standings from eight points over No. 66 Ford GT teammates Dirk Mueller and Joey Hand to 16 points over No. 25 BMW co-drivers Alexander Sims and Bill Auberlen.

They did it through masterful strategy and a little bit of luck. Magnussen started the race from sixth, but moved into the top five on the opening lap of the race and got all the way to third before pitting 49 minutes into the two-hour, 40-minute race to turn the car over to Garcia.

The Spaniard acknowledged after the race that the team focused on conserving fuel for much of his closing double stint. At the same time, however, he also faced a stiff challenge from Giancarlo Fisichella in the No. 62 Risi Competizione Ferrari 488 GTE and Mueller in the No. 66 Ford Chip Ganassi Racing entry.

[adinserter name="GOOGLE AD"]"I didn't know how much fuel they were saving, so I didn't know what pace we were doing," Garcia said. "I think the key was stopping one or two laps later than the Ferrari and the Ford, because I had really clear laps from those two. That made me so close to the Ferrari and especially to be ahead of the Ford coming out of the pits. Ninety percent of the race was that pit stop and being able to get in front of them."

That was a battle for second, though, as Sims was well up the road in the No. 25 BMW Team RLL machine after combining with Auberlen to dominate most of the race. Garcia and the Corvette team’s fuel conservation tactics ultimately paid off, though, because Sims was forced to pit from the lead with less than 15 minutes remaining.

That stop promoted the Corvette into the lead and Garcia brought it home the rest of the way to win by 12.031 seconds over the No. 67 Ford Chip Ganassi Racing Ford GT shared by Richard Westbrook and Ryan Briscoe. The race was run without a full-course caution.

It was the first win for Magnussen and Garcia since May’s Advance Auto Parts Sportscar Showdown at Circuit of The Americas. They also won in March at the Mobil 1 Twelve Hours of Sebring Fueled by Fresh From Florida.

"It’s unbelievable for us to come away with a win," Magnussen said. "Honestly, in the middle of the race, it kind of looked like a situation of 'OK, we aren't losing too much in the championship, a couple of points

here, a couple of points there, but we would still stay in the lead of the championship.' Then, for things to turn around like they did in the last half hour with the BMW coming up short (on fuel) and the Ferrari falling off, it was a crazy, absolutely crazy result. Such a fantastic result for the whole team."

The runner-up result for Briscoe and Westbrook moved them into a tie for third in the GTLM standings with their Ford Chip Ganassi Racing teammates, Hand and Mueller, and just one point behind second-place Sims and Auberlen.

"We actually had good pace in the car," Westbrook said. "We did the best we could, and in the end that was good enough for second. We drove a nice, good, clean race and it’s nice to finish up on the podium here."

Fisichella and co-driver Toni Vilander came home third in the first WeatherTech Championship race for the Houston-based Risi team since May at Circuit of The Americas. The No. 62 team also won the DEKRA Green Award for the race, which goes to the cleanest, fastest and most efficient GTLM car through Green Racing protocols established by the Environmental Protection Agency (EPA), U.S. Department of Energy (DOE) and the Society of Automotive Engineers (SAE) International.

The No. 66 team was poised for a podium result before a late-race incident between Mueller and Tommy Milner in the No. 4 Corvette sent both cars off course. The No. 66 team recovered to finish fifth, one spot behind Sims and Auberlen after the No. 25 BMW’s late pit stop dropped them to fourth. Sims and Auberlen combined to lead for most of the first two-and-a-half hours.

Next up for the WeatherTech Championship is the America’s Tire 250, part of the Continental Tire Monterey Grand Prix at Mazda Raceway on Sunday, Sept. 24. The two-hour, 40-minute race will feature the Prototype (P), GTLM and GTD classes.

The VIRginia International Raceway weekend couldn’t have gone any better for Change Racing and Lamborghini. Literally.

After sweeping each of the weekend’s four practice sessions and scoring the TOTAL Pole Award, co-drivers Jeroen Mul and Corey Lewis capped off a weekend sweep in style in the Michelin GT Challenge Sunday, leading all 91 laps in the No. 16 XBOX / Monster Energy / Orion Lighting Lamborghini HuracÃ¡n GT3.

It was the first career IMSA WeatherTech SportsCar Championship win for Mul, Lewis and Change Racing, and the first win of the season for Lamborghini.

VIR has been kind to Lamborghini, with the manufacturer’s first WeatherTech Championship victory coming at the circuit last season.

"For this weekend the stars aligned perfectly, it was a complete home run," said Mul. "The car was an absolute dream, it handled this course beautifully. The first part of the race for me, the start was a little tricky with the GTD and GTLM field starting all together, but I managed to stay ahead, stay in the lead, and as soon as the entire GTLM field cleared me, I was able to get into a solid rhythm and pull away from the rest of the GTD field."

Despite the dominant effort throughout the weekend, the win certainly didn’t come easy with Lewis having to hold off the No. 96 Turner Motorsport BMW M6 GT3 of Jens Klingmann in the closing laps. Klingmann got to the rear bumper of Lewis on the final lap, but couldn’t make the pass, finishing second in the car started by Jesse Krohn, 1.035 seconds back.

"The last 20 minutes was not what I was planning," said Lewis. "Getting around back markers was a lot harder than I thought it would be. With the Turner guys charging as hard as they were, it took everything I had just to remain calm. I drove as consistent as I possibly could. This being our first GTD win as a team and my first win, this is one we had to work for."

Third place went to the No. 33 Riley Motorsports Mercedes-AMG GT3 of Jeroen Bleekemolen and Trent Hindman, who was filling in for full-time driver Ben Keating. Keating, who had multiple businesses and his residence in the path of Hurricane Harvey, returned to his home in Texas Friday afternoon.

The No. 33 Riley Motorsports team entered the weekend second in GTD points, 15 points behind the No. 63 Scuderia Corsa Ferrari 488 GT3 of Alessandro Balzan and Christina Nielsen, who finished one spot back in fourth. That gap has since closed to 13 points with two races remaining.

The GTD class returns to action for the America’s Tire 250 at Mazda Raceway Laguna Seca. The penultimate race on the series schedule will be televised live on FS1 Sunday, Sept. 24.