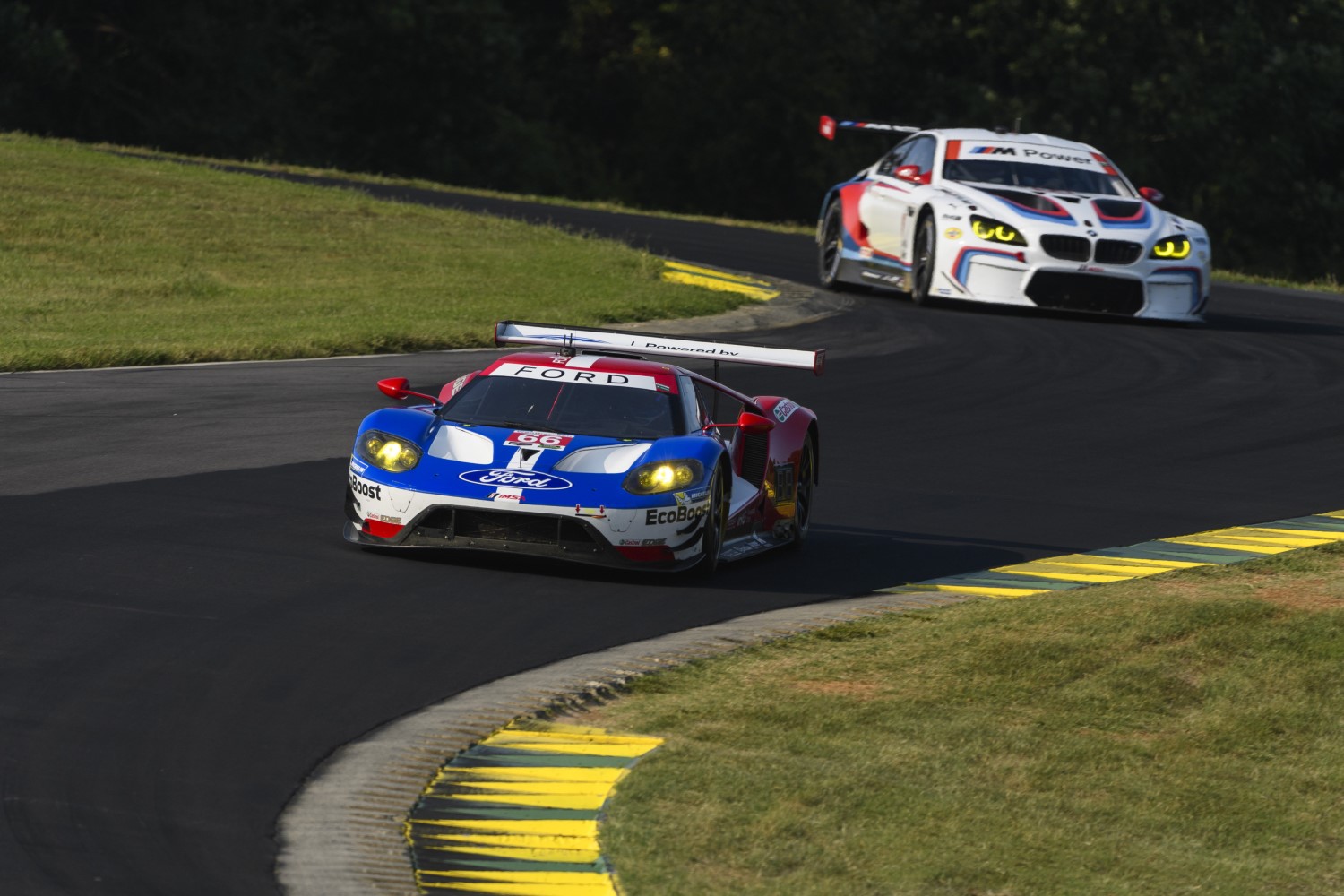 ALTON Va. – Joey Hand threw everything he had at his last lap of qualifying Saturday for Sunday’s Michelin GT Challenge at VIRginia International Raceway.

"I told (the team) coming down the hill on the last lap, if this doesn't do it I don't know what will," said the driver of the No. 66 Ford Chip Ganassi Racing Ford GT. “I got everything I could out of it."

As it turns out, everything was just enough. Hand will start the race – which will be televised live on FS1 beginning at 1:30 p.m. ET and also will be broadcast live by IMSA Radio on IMSA.com, RadioLeMans.com and SiriusXM Radio – from the pole position.

Hand’s best time in the 15-minute qualifying session under perfect weather conditions was 1 minute, 40.211 seconds (117.472 mph), breaking Jan Magnussen’s year-old GTLM track record of 1:41.557 by more than a second. On Sunday, Hand and co-driver Dirk Mueller – who also qualified on pole for the most-recent WeatherTech Championship race at Road America earlier this month – will go for their second consecutive GTLM victory.

“Just like Road America, we rolled out of the trailer so good here," Hand said. “We haven't touched a lot. We did a few laps and Dirk and I said ‘Let’s put it away. We'll take it like that, just put some new tires on it and some fuel and just go.’

“We’re really excited. Dirk's done such a great job setting it up, he was on the pole at Road America and it’s a great way to start. I told him at RA I'm super comfy, I told him here I'm super comfy. I think good things can happen here."

If good things do happen for the No. 66 team on Sunday, it’ll go a long way in the battle for the GTLM championship battle. Hand and Mueller currently trail points co-leaders Jan Magnussen and Antonio Garcia – the defending winners of the Michelin GT Challenge – by eight points, 239-231. Including Sunday’s race, there are three rounds left on the 2017 WeatherTech Championship season. Magnussen qualified the No. 3 Corvette sixth.

Second and third on the GTLM grid went to BMW Team RLL teammates. Alexander Sims qualified second with a best lap of 1:40.415 (117.233 mph) in the No. 25 BMW M6 GTLM he co-drives with Bill Auberlen. Sims and Auberlen are in the championship mix as well, just one point behind Mueller and Hand.

The ‘Fight of the Century’ may be later tonight, but a trio of drivers in the GT Daytona (GTD) class – from three different manufacturers – had a battle of their own Saturday afternoon in TOTAL Pole Award qualifying for the Michelin GT Challenge at VIRginia International Raceway.

At the end of the 15-minute session, the No. 16 Change Racing Lamborghini HuracÃ¡n GT3 of Jeroen Mul topped the charts with a lap of 1 minute, 43.391 seconds (117.472 mph). Mul, the BMW of Jesse Krohn and the Mercedes of Jeroen Bleekemolen each swapped the top spot throughout the session with Mul eventually setting the fastest lap in the final minute.

It was the second consecutive TOTAL Pole Award for Mul and the Change Racing team.

“I have to say that the team has done such a good job preparing the car this weekend," said Mul, who also was fastest in each of the three WeatherTech Championship practice sessions of the weekend. “So, this back to back pole is very much deserving for this Change Racing team. We’re super excited to be able to do this for our home crowd."

[adinserter name="GOOGLE AD"]Change Racing is based in nearby Concord, North Carolina, and is looking for its first win of the season. To do that, they’ll have to fend off challenges from a contingent of GTD competitors. Among them is the Road America-winning No. 96 Turner Motorsport BMW M6 GT3 of Krohn, who qualified second at 1:43.621 (113.606).

Andrew Davis jumped into the top-3 on his final lap of the session in the No. 57 Stevenson Motorsports Audi R8 LMS with a lap 1:43.770, moving Bleekemolen to fourth in the No. 33 Riley Motorsports Mercedes-AMG GT3.

Five different manufacturers made up the top five positions in GTD qualifying with Jack Hawksworth qualifying fifth in the No. 15 Lexus RC F.