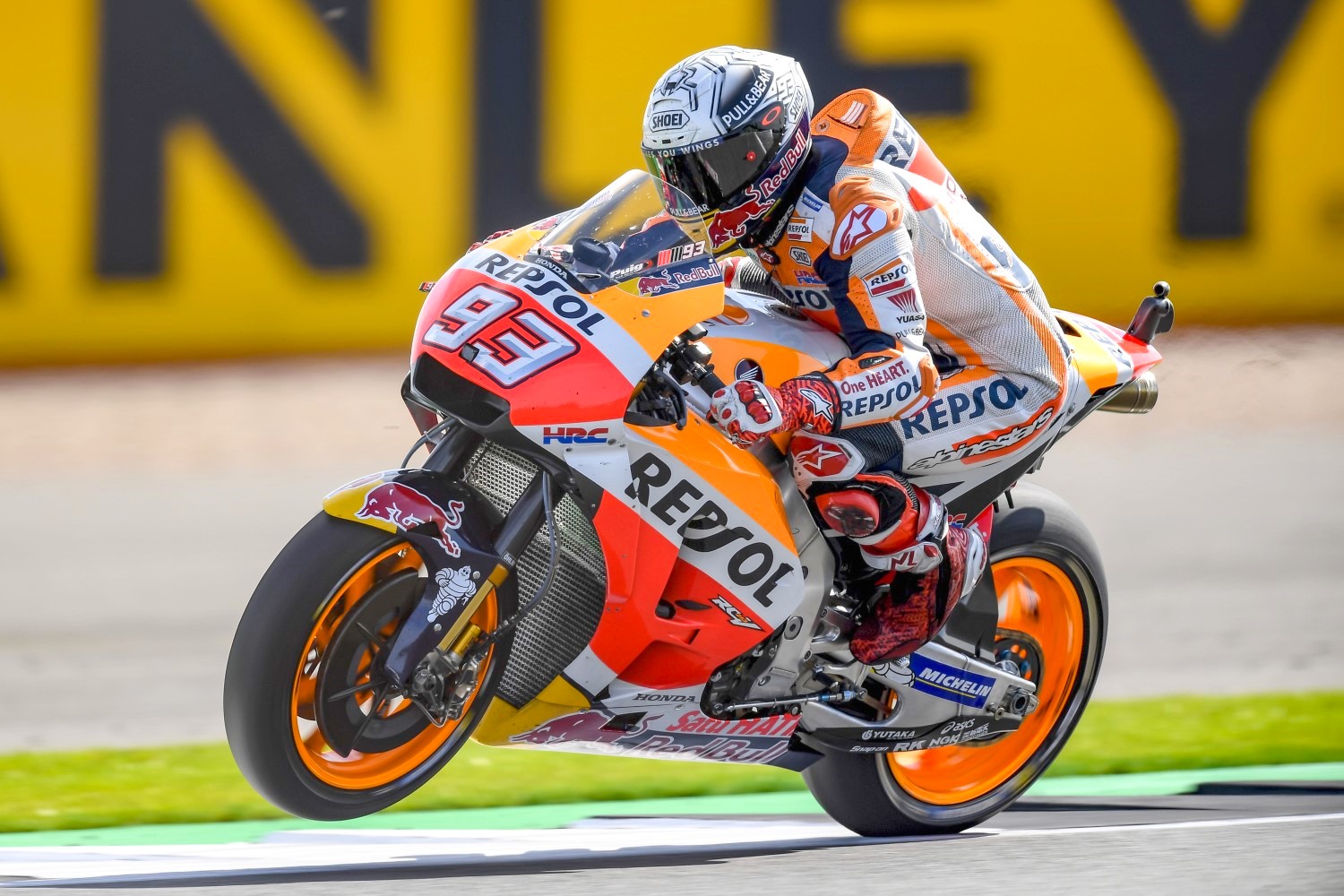 Marc Marquez (Repsol Honda Team) took a record-breaking pole and got down into the 1:59s for the first ever lap of Silverstone under the two minute marker, in qualifying for the British GP, but it was far from easy as the reigning Champion just beat Valentino Rossi (Movistar Yamaha MotoGP) to the top by less than a tenth and the two key rivals painted the timesheets red in the final minutes of the session.

For incredibly close company in third there’s home hero Cal Crutchlow (LCR Honda) – fastest on Friday and on pole last year – with the whole front row covered by a tenth and a half.

Maverick Vinales (Movistar Yamaha MotoGP) heads up the second row a further two tenths back on Crutchlow, just ahead of the fastest man in FP4, Jorge Lorenzo (Ducati Team). As on Friday, the number 99 was top Ducati at Silverstone in qualifying – just ahead of teammate Andrea Dovizioso in P6, 0.173 back.

Dani Pedrosa (Repsol Honda Team) made the biggest leap forward on Saturday afternoon after a tough Friday and FP3, coming through Q1 to move up into seventh – and by only 0.006.

Just behind Pedrosa in the middle of the third row is Johann Zarco (Monster Yamaha Tech 3), with Aleix Espargaro (Aprilia Racing Team Gresini) completing Row 3 as he rides through the pain barrier.

Through directly to Q2 after a stunning Friday, Espargaro suffered a crash in qualifying but nevertheless took eleventh for the British GP as KTM continue to impress. Scott Redding (Octo Pramac Racing) took P12 at a venue that has been a happy hunting ground for the Brit.

Thirteenth on the grid belongs to Alex Rins (Team Suzuki Ecstar) as the rookie shows some good pace at Silverstone, just ahead of Pull&Bear Aspar Team’s Alvaro Bautista, who begins his 250th race from P14. Andrea Iannone (Team Suzuki Ecstar) locked out the fastest fifteen.