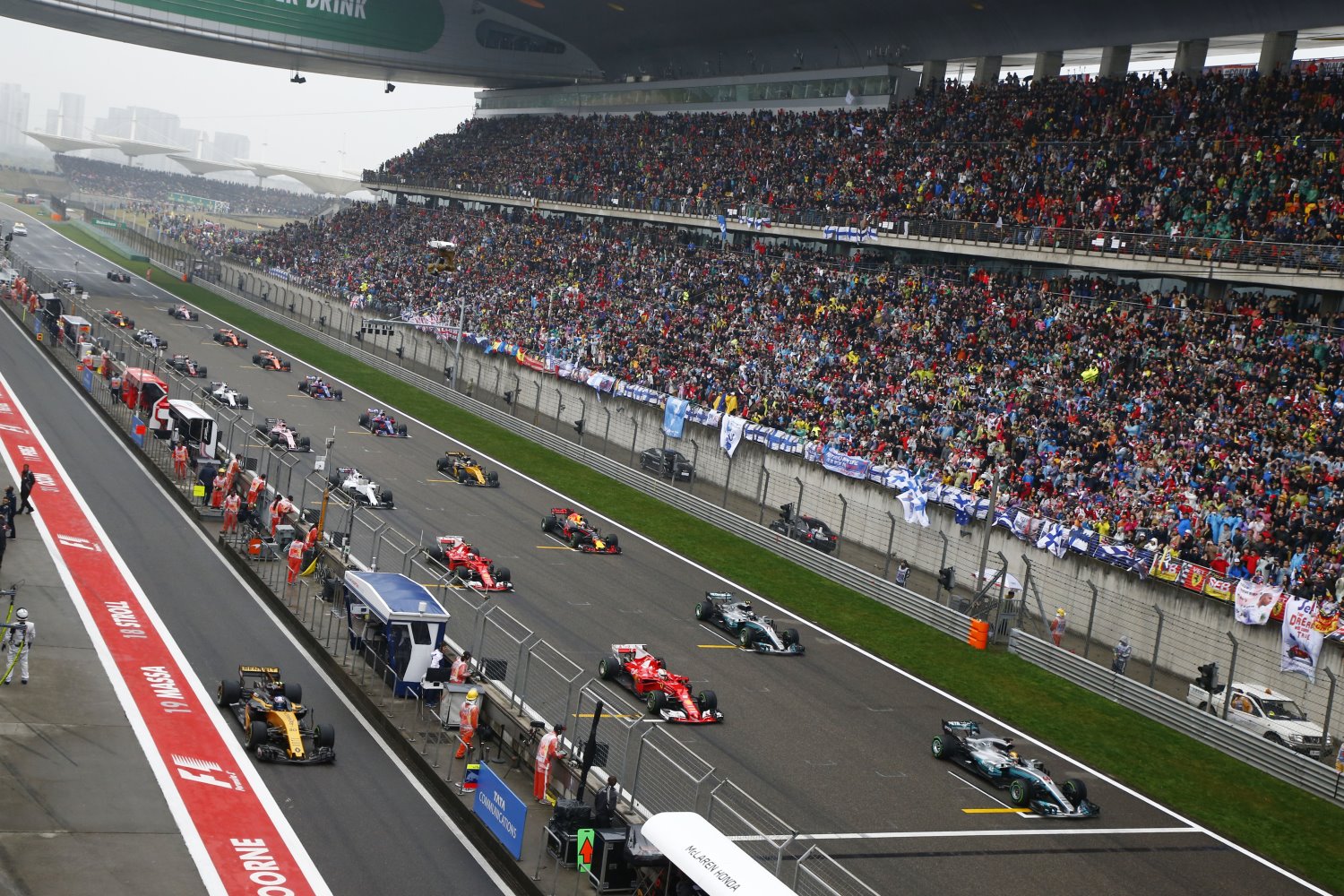 UPDATE A reader writes, I agree, it’s one of the dumbest ideas ever to change to a 2×3 grid. A clear indication that those in power really don’t have a good grasp on the sport, and may even see it as some type of circus where they can change part of an act in order to “wow" people.

So, we are basically going to intentionally create a situation where no car behind a 3 car row can get past the 3 car row on the start? Wow, talk about pretty much taking away most opportunities to pass any car in the row in front of you if you make a good start. Why? Well, if a car in the row behind any 3 car row makes a good start, to pass ANY car in front they will basically have to go four wide. How often do we see four wide passes in F1? Yep, next to never, but that’s what the F1 powers think will be a great idea to spice up what is arguably the most exciting thing to watch in all forms of motorsports, the standing start in F1.

Oh yes, I’m sure there will be a few situations where a car behind a three car row makes it past one of the cars, but most often the three car row will create a traffic jam where no following car can get past on most tracks. Furthermore, do they not realize how incredibly easy it would be for any car on a three car row to intentionally block the road to prevent a trailing car from getting past?

Don’t forget the confusion it will create with the fans after qualifying. Quickly, let me ask you, on which row does a driver start when they qualify 9th? Right now, that’s easy to calculate – row 5. Now, on which row do they qualify with the 2×3 format? Ugh, ugh, ugh….wait, let me think about it. Now what about if they have a 5-place grid penalty so they start 14th. What row is that?

Finally, never mind the complete washing away of another tradition in F1. I’m all about making adjustments to improve things, but not removing traditions that make F1, Formula 1. They’ve already removed the high revving, screaming engines (the sound of F1), imposed asinine penalties for engine/MGU-ABCEFGHIJKLMNOP components/turbo replacements that penalize the DRIVERS and FANS (as opposed to penalizing the CONSTRUCTOR via constructor points, duh), and now want to make a 2×3 grid to “spice things up?" Spice things up, huh? I guess just like these amazing engines, motors, power units, or whatever we are supposed to call them which have essentially relegated the entire field to racing for second place (silently), and robbing the fans from watching one of the sports all-time greats battle for nothing more than a single point on a good day if his Honda doesn’t blow up?

If this is the way F1 wants to go, I recommend two other changes. First, take a page from Indycar. Remove the requirement that all the teams have to paint their cars the same color. This way, it will make it difficult for the regular fan to know which drivers are teammates, which cars are on the same team, which cars are working together or against another team, and make it near impossible for a casual fan to identify a driver or team. Fans will be hard-pressed to identify a driver with a particular team or identify which team is which when watching an event, and therefore, make it much harder for new fans to get attached to a particular team or driver. Quick, what color are the Ferrari cars? What about the Mercedes cars? Pretty simple, right? Now, what color are the Penske cars? I bet you probably thought of the Marlboro color scheme they used for decades. How about the Ganassi team cars? I bet you thought about the Target red color car they used for decades as well with Montoya, Vasser, Zanardi, Franchitti, and Dixon. Unfortunately, if you looked for a Marlboro colored or Target red colored car to identify a Penske or Ganassi team car, you’d never figure it out – and those are traditionally the two most well recognized Indycar teams. But, hey, if F1 did this it would “spice things up!"

Second, take a page from NASCAR. Always when there are less than 10 laps to go, throw a full course yellow flag requiring a safety car. It doesn’t matter what it is for, just do it. Call it a “competition caution" like they do in NASCAR. That way, nobody has to watch any other part of the race, none of the work that a driver has accomplished through their skill, craft, and pure speed throughout the race to manage their tires or build a gap over their competitors will really matter, none of the different strategies that the teams are calculating that often play out over the course of a race and come to fruition near the end of the race will not matter either. Everything will get thrown out, the field will get bunched up, and everything will come down to a restart. This way the most important skill that a driver will need to have to win one of these F1 races will really come down to how well they can do a restart and how aggressive they are to make a “banzai" pass. Making a car that is good on its tires or good over long distances will not matter, only how quickly they can add heat to their tires to be ready for a restart and 10-lap run. Heck, we should just get rid of the other laps entirely and just run a 10 lap race. I don’t see why not. It would really make for a good “wow" factor, just like this 2 x 3 grid idea.

Change for the sake of change is often impulsively and improperly implemented…ala trying to change the qualifying format two years ago.

10/26/17 (GMM) Nico Hulkenberg has given the thumbs up to plans to radically reform the F1 starting grid.

We reported earlier this week that Liberty Media is contemplating lining up the cars in two and three-car grid rows in the future.

"For me it would be perfectly fine and I don't think it would cause more accidents."

However, the German driver does think the alternating two and three-car row grids would be an issue at some circuits.

"In Monaco it would not be possible to put three cars side by side on a row because of the width of the track," Hulkenberg said.

"But the authorities will think about those issues after the season," he added.

In Austin, the pre-race proceedings were suddenly changed when the pitlane was opened earlier to allow legendary announcer Michael Buffer to introduce the drivers in Indy 500 style.

Not just that, Usain Bolt spiced up the waving of the green flag.

"We want formula one to cross the boundary between sport and show," said Liberty's F1 commercial boss Sean Bratches.

Now, the next innovations are being planned.

Sporting boss Ross Brawn has been quoted by F1 business journalist Christian Sylt as saying Friday practice sessions could be axed in future, making room for more races on the calendar.

"One of the things we are doing is looking at the format of a race weekend to see if we need to change that to make it logistically easier for them (the teams) to do more races," Brawn is quoted by Forbes.

And Germany's Bild newspaper reports that another idea being discussed is a shake-up of the traditional 'two by two' formation on the race grid.

The report said the grid rows in the future could alternate between two and three cars, increasing competition and the risk of a crash.