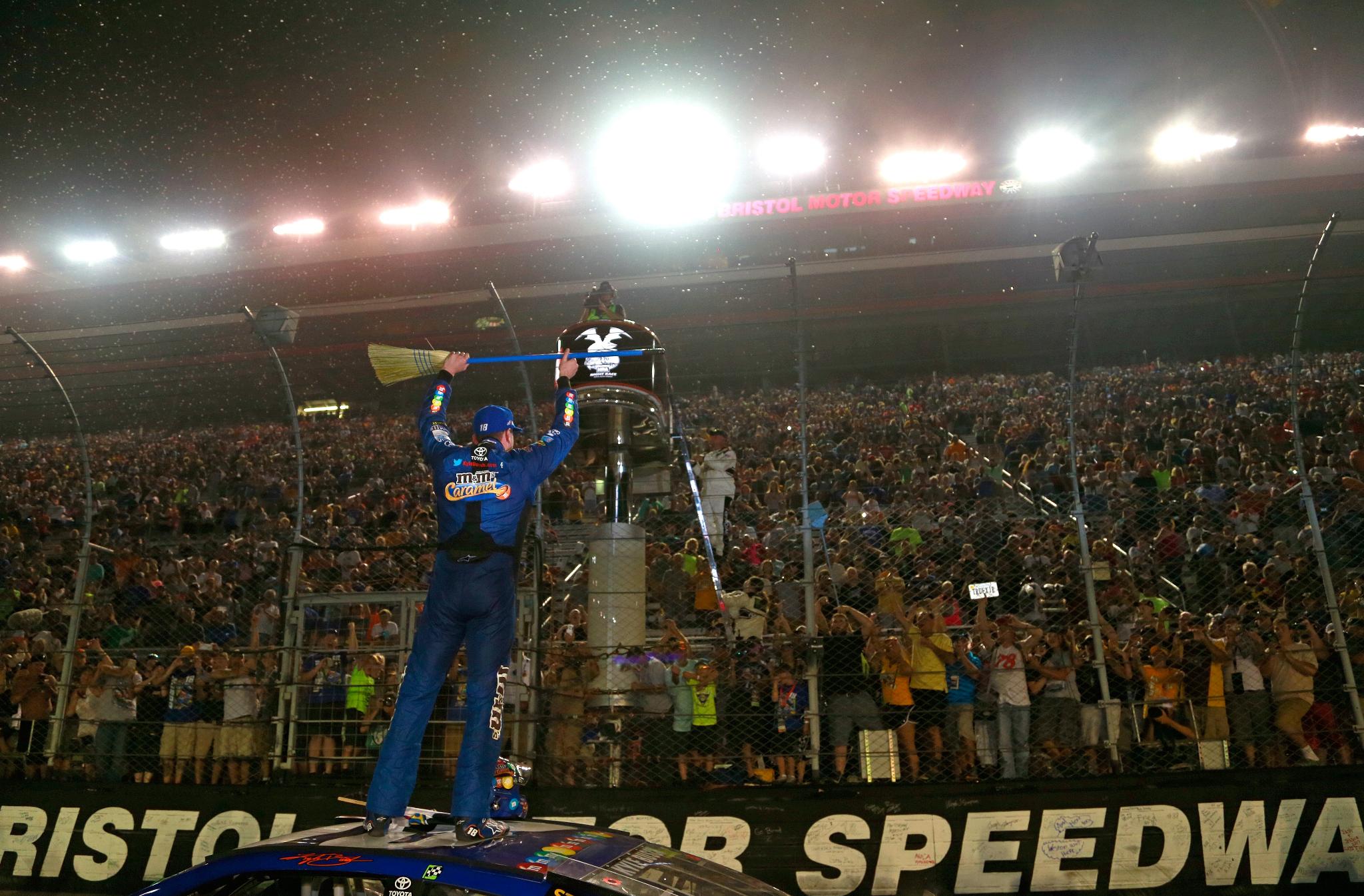 Busch got past Jones as well as his Joe Gibbs Racing teammate Matt Kenseth to jump from third to the lead with 55 laps to go and then sliced his way through lapped traffic to beat out Jones by half a straightaway for his second win of the season.

Denny Hamlin and Kenseth finished third and fourth to give Toyota a sweep of the top four spots. Kurt Busch rounded out the top five.

Busch, who became the first Cup Series driver to win all three races in a single weekend in this same event back in 2010, won Wednesday night's NASCAR Camping World Truck Series race with a come-from-behind victory in the final segment, then followed that up with a dominating run in Friday's NASCAR Xfinity Series race to set up a chance for his second-career hat trick.

"Man, Erik Jones put up a whale of a fight," said Busch, who notched his 20th Bristol victory. "That's all I had. I was running with my tongue hanging out. My arms were Jello and my throat hurts, but man that's awesome.

"This is for Rowdy Nation. Rowdy Nation's really what fuels us to get ‘em out, to get around and get along and all the noise is good noise, that's how I feel about it. Some people like it, some people don't. A lot of people like a lot of other drivers that were popular and some didn't either, so I don't care. I am who I am."

Busch made it known early in the race that he wanted to be the one out front, waging a door-to-door duel with Kyle Larson to win the opening 125-lap segment.

A slow pit stop put Busch back in fifth for the second segment, but he quickly powered through the field to regain the top spot on lap 167, trading the lead with Jones five times over the next 75 laps.

A caution with seven laps to go brought the field to pit road, but Kenseth elected to stay out and led the final laps to win the second stage.

The final 250-lap segment was more of the same as Jones and Busch duked it out with Kenseth lurking close behind, eventually passing Busch for second place with 75 laps to go.

Falling to third seemed to get Busch's blood boiling, as he quickly reeled in Kenseth and Jones by running the low side, ducking under both drivers with 55 laps to go to take the lead for the final time.

Jones would lose second place to Kenseth but came storming back with 37 laps to go, pushing Kenseth aside to retake the spot. He managed to close within 10 cars lengths of Busch in the final laps, but couldn't make up any more ground.

Jones' runner-up finish was his second-straight top-three finish, but a frustrating end for Jones, who saw his shot at his first Cup Series win slip out of his grasp for the second week in a row.

"You don't want to sound like you're whining or being a sore loser by saying it sucks to run second, but it's a bummer. It hurts," said Jones, who led a race-high 260 laps. "You know, you want to win every race you're in. This was the first shot that I really had to come really close to it in the Cup Series. Bristol is a really good racetrack for myself. Thought we had a shot at it all night, led a ton of laps.

"That good of a car, it's Kyle Busch. He won all three races here this weekend. So I feel like I'm close to him here, just trying to find that last little bit."

The final push for the lead was an odd situation pitting current teammates and future teammate against one another, with Jones set to take over Kenseth's ride in 2018 and join Busch at JGR.

The irony of the situation was not lost in Kenseth, who is still seeking a ride for next season.

"Takes my ride and runs into me," Kenseth joked. "Me and Kyle, we both got a pretty good run up on the top, got mixed up, got in front of him, then just wore me down and passed me back. I didn't see him very long. Just got a lot smaller.

Saturday night's result gave Kenseth a little more breathing room in his bid for a spot in the playoffs. Kenseth now sits 15th in the playoff standings, just one spot above Jamie McMurray at the cutoff spot with just two races left in the regular season.

"I wasn't really thinking about the Playoffs," said Kenseth "There's only two races left, so somebody is going to make it by points. If you don't get a win in the next two weeks, hopefully we get in.

Jones' runner-up spot inched him closer in the playoff race but not close enough – now sitting 19th in the standings behind Clint Bowyer now and Joey Logano, all of whom need a win in the final two races to secure a playoff spot.

How much does this win mean to you as you sweep Bristol for a second time in your career?

[adinserter name="GOOGLE AD"]“That one was a lot harder. Man, Erik Jones put up a whale of a fight. That all I had. I was running with my tongue hanging. My arms were jello and my throat hurts, but man that’s awesome. Can’t say enough about everybody on my Joe Gibbs Racing team. Adam Stevens (crew chief) and the guys are phenomenal. Car might not have been perfect, but I’m never perfect. I never feel like we’re perfect, but this Caramel Camry was fast. So proud of these guys, so proud of my team, so proud of Joe Gibbs Racing. So proud of Rowdy Nation, this one’s for you."

How much fun was that racing Erik Jones at the end and getting the broom again?

“Is this the XFINITY Series or the Cup Series? I mean Erik Jones put up a whale of a fight. I mean I just can’t say enough about that young man. He’s a great kid. I have a lot of fun with him. I have a lot of respect for him. He raced me awesome out there like a great teammate and gave me the room when necessary and raced me hard when necessary. Man, it’s just great to have a guy like that. This M&M’s Caramel Camry was awesome tonight. Adam Stevens and these guys they never quit working on it. Every single pit stop we kept working on it, kept adjusting on it, so I can’t say enough about his Toyota Camry, everybody at TRD – want to thank Interstate Batteries, NOS Energy Drink, Cessna, DVX Sunglasses and of course the fans. This is for Rowdy Nation. Rowdy Nation’s really what fuels us to get ‘em out, to get around and get along and all the noise is good noise, that’s how I feel about it. These M&M’s Caramels are going to be celebrating tonight."

How have you seen Rowdy Nation get behind you and have your back?

“I can’t fight as much as I want to fight on social. There’s a lot of trolls out there, so my guys do it for me, so I appreciate them and being able to do that. It’s awesome to have a legion of fans no matter if they’re the biggest ones or the 50 percent ones or whatever. It’s just a matter of being able to win people’s hearts whether it’s be outracing, outdriving, outperforming people on the race track or sometimes they’re antic. Some people like it, some people don’t. A lot of people like a lot of other drivers that were popular and some didn’t either, so I don’t care. I am who I am."

How tough is this runner up finish?

“It’s a bummer, I mean you can’t lie. I thought we had a really good day and we fought hard all day. We had our ups and downs and led a lot of laps and didn’t have quite enough at the end. Kyle (Busch) is really good here. But we had a good 5-Hour Energy Camry. Just needed a little more at the end. It’s just unfortunate we didn’t have it. I did what I could, but it just wasn’t quite enough."

Everyone was telling you how proud they were of you, did that take the sting away at all?

“It is what it is. We raced hard all night. We led a lot of laps. We did almost everything we needed to do. We qualified on the pole and ran second, so I wish we would’ve had a little bit more. It’s a bummer. It’s a great weekend for us. You can’t take that away. The 5-Hour Energy Camry was fantastic, but you still wish you could’ve had that little bit more to grab the win. That one would’ve meant a lot to us, but we’ll just have to keep after it. That’s two good weeks for us and we’re going to keep fighting and keep going after these wins."

Two good tracks coming up, can you repeat the feat and get a win?

A satisfying third place or disappointing?

“Half and half. Definitely with the track position, we definitely could have held those guys off. We caught them a little bit in that last run, but I restarted on the bottom so many times that it’s one of those weekends where I would love that cone rule where you can pick what lane you want to go in on restarts. I’d be willing to start 12th on the outside versus third on the inside. It’s just I got killed on restarts all day, but we did a really good job of bouncing back and good finish."

“Unfortunately we just it just got bigger. We had the opportunity to get there. We had good restarts. We were really really good early in the race, ten lap runs and Jason (Ratcliff) made good adjustments and got it where we were good on a 50-lap run. After that we were just junk. It just wouldn’t turn off the corner and I was just a dead dog. Trying to pace it early that run and with only one set of tires left we had to stay out. It was just too long a run for the way our car was set up. We were really good on restarts, really good short runs, long runs just couldn’t get it done."