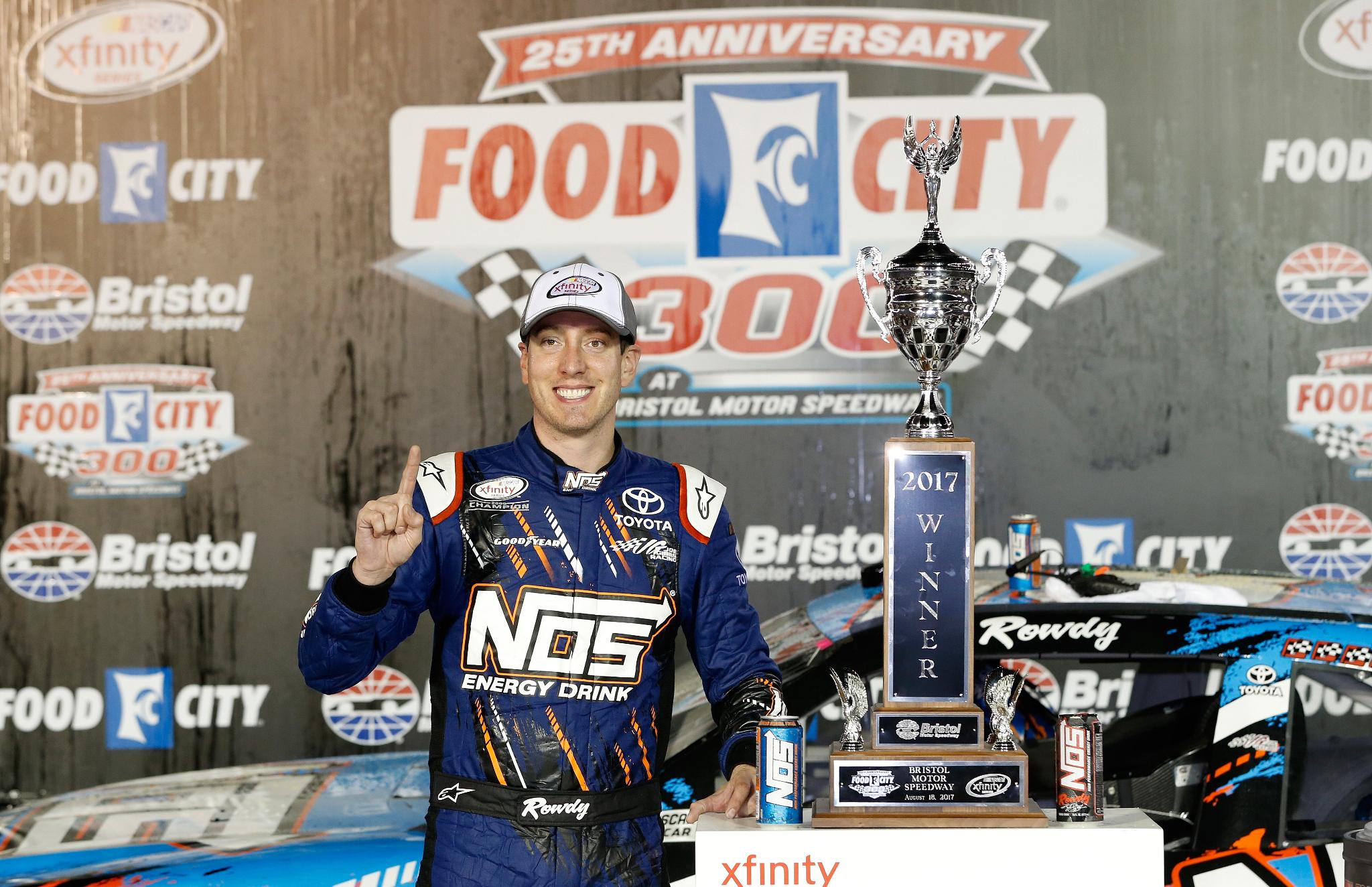 Kyle Busch beat up on the NASCAR Xfinity Series drivers yet again with a domineering performance in Friday night's Food City 300 at Bristol Motor Speedway for second Bristol win of the week.

Busch led a race-high 186 laps including the final 81, and held off his Joe Gibbs Racing teammate Daniel Suarez on a final restart with nine laps to go to take the checkered flag for the fifth time this season.

It was the 91st series win of the season for Busch, and his second win at Bristol in just three days after winning the Camping World Truck Series race on Wednesday night.

"All the guys at Joe Gibbs Racing did a phenomenal job and gave me a great NOS Energy Drink Camry," said Busch. "It's always fun to have a better house here at Bristol. There's nothing better than the night race at Bristol, so it's cool to win here."

He'll be looking to complete the Bristol trifecta – for the third time in his career – with a victory in Saturday night's Cup Series race.

Busch led from the pole and faced some strong challenges from Allgaier and opening segment before getting mailed for speeding on pit road at the end of the first stage, forcing him to the rear of the field for segment two.

Restarting in the back was more of an inconvenience than a challenge for Busch, who roared back through the field in just 60 laps to swipe the lead back from Suarez and win the second stage.

Suarez restarted as the leader for the final stage and led the opening 14 laps before giving way to Sadler on lap 187. Busch then powered past Sadler to retake the lead on lap 202.

Busch looked to have clear run to the finish before Brendan Gaughan crashed on the frontstretch with 15 laps to go, setting up the final dash to the checkers.

On the restart, Busch easily cleared Suarez and checked out, beating the 2016 Xfinity Series champion by half a straightaway at the finish.

"(On the restart) I wasn't able to do anything at that point, but the guys made some adjustments and in the last run I had something for him (Kyle Busch), but in the last run right there at the end I felt like I used my tires a little bit too much and he was saving a little bit more than me," said Suarez. "I guess that's a little bit of experience, right. We'll get there."

Unlike the truck series race on Wednesday, Busch didn't have to slice his way back through the field in the last segment, but certainly had the car to do it.

"At least I didn't have to come through in the last stage because everybody was pretty fast there tonight in the last stage," said Busch. "I don't know if I would have been able to make it all the way back up through there. (Daniel) SuÃ¡rez gave us a heck of a run there."

Brennan Poole, Daniel Hemric, Austin Dillon, Joey Logano and Cole Custer rounded out the top ten finishers. Dale Earnhardt, Jr. finished a lap down in 13th after getting into the wall near the halfway mark of the race.

Sadler's third-place showing allowed him to open up a 110-point lead over rookie William Byron, who cut a tire shortly after the final restart and was forced to pit, eventually limping home with a 19-place finish.