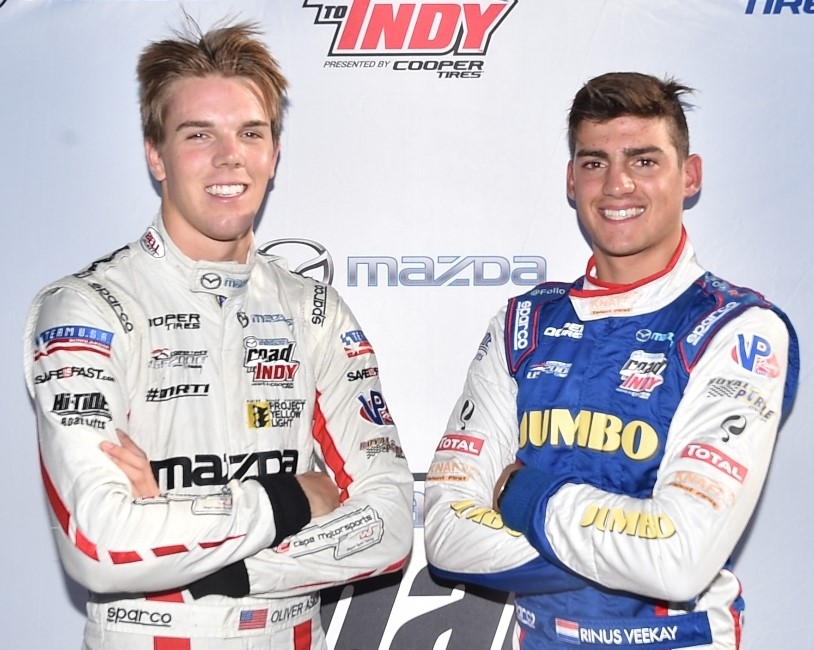 Oliver Askew of Cape Motorsports and Rinus VeeKay of Pabst Racing are separated by 13 points in the battle for the Cooper Tires USF2000 Championship Powered by Mazda crown entering the season finale at Watkins Glen International to be held September 2.

As Oliver Askew looked out over the sea of impossibly earnest Team USA Scholarship candidates last month at Mid-Ohio, his mind couldn’t help but go back one year in time. In July of 2016, Askew stood among 10 other candidates vying for two positions on the team heading to England for the Formula Ford Festival and the Walter Hayes Trophy – and the chance to compete against some of the best young formula racers in the world. But also dangling in front of those young American racers was the opportunity of a lifetime: a ticket to the Mazda Road to Indy Shootout at Mazda Raceway Laguna Seca and the chance to earn a seat in the 2017 Cooper Tires USF2000 Championship Powered by Mazda.

“It really hit me when I saw all of the kids dressed nice and introducing themselves," said Askew. “I was in that exact position last year. I felt it was important for me to try and let them know what to expect, because I remember not having any idea of what was happening. I let them know what to expect, what they should do and how they should talk to people. It’s a lot of pressure.

[adinserter name="GOOGLE AD"]“Everything was so new last year," continued Askew. “I walked through the USF2000 paddock and I thought ‘this is going to take a lot of work but this is where I want to be next year.’ I remember standing in front of the Cape Motorsports transporter in the paddock, and back then I didn’t realize how dominant they really were and how much knowledge they had. I just thought it was such a fantastic team and somewhere I would love to be. I saw Parker (Thompson) for the first time in four years, as we went our separate ways after racing together on the same karting team in 2012. He was leading the championship at that point and it really impressed me."

By now, Askew’s story is well-known: the Jupiter, Florida karting sensation earned that Team USA Scholarship and impressed everyone with his poise and race craft during his two events in England, taking second at the Walter Hayes Trophy and challenging for second in the Formula Ford Festival Final until a punctured tire ended his day. Askew then bowled over the judges both on and off the track at the MRTI Shootout, taking the race victory and the $200K scholarship into the series this year.

“I knew that it could completely change my life, and I honestly didn’t think it would happen but it did! I wouldn’t be in the position I’m in right now without Mazda – and I know there are so many drivers out there who can say the exact same thing. There is no program like this in the world and I want to keep this relationship going. John Doonan is such a great person and really takes care of the scholarship drivers. Same thing for Jeremy Shaw with Team USA – he was the first person to really believe in me. And Art Wilmes, with Rising Star Racing. He really helps drivers. Racing takes so much money but there are people out there who want to work with young drivers, and Art has really taken me under his wing."

But even Askew could not have predicted the kind of start he would have this season: seven wins (including six victories in the first seven races), seven pole positions and podium finishes in all but three of the 13 races. He holds a 13-point lead on Dutch rookie phenom Rinus VeeKay.

“A lot of people around me kept telling me not to put too much pressure on myself. Honestly, I didn’t think it was possible (to win the championship). I knew we would be competitive but this was my first full season in car racing and there was so much to learn. We did well in winter testing but we didn’t know how we compared to other teams until the series test at Homestead in March. It caught me off guard. It was a huge confidence booster for me and the team and really gave our season a kick start.

“Then, at St. Pete, I was expecting the second and third-year drivers to be on top after that round, and they were – but we were right there with them. We had a rough start to the weekend, because I tagged the wall in practice and only got a couple of laps in before qualifying. But we qualified third and second for the two races, and finished second and first. We won Barber and IMS and dominated, which was a serious statement that we were here to play. Then, it felt like a bigger deal, that maybe we could win the title. My car was just on rails at those two tracks. I was so comfortable."

The Indianapolis round also marked a milestone for young Askew. Back in 2010, as a 13-year-old karter, Askew was headed to the Rotax Grand Nationals in New Castle, Ind., and his karting team made a stop at the famed Brickyard for a tour – and posed for photos in a spot he would revisit under very different circumstances seven years later.

“Before we headed to the karting event, we stopped at the Speedway. We did the tour – the bus around the track, everything. They took us to the podium, and there is a photo of me at 13 years old standing on the podium with my karting team and hoping that one day I could be there, holding up a trophy. When I did, it was amazing. And to be there under those circumstances, with a 60-point lead in the championship and having won five of six races, was incredible."

But as every driver knows, there are good days and bad days, and no season is complete without a good measure of both. For Askew, the bad days hit the very next race weekend at Road America, where loose camber shims put him back in the field. He rebounded with a victory on his first oval at Iowa but got caught up in an incident between the two cars ahead of him at Toronto that again dented his points advantage. But Askew wisely believes that every impediment to success is a learning experience.

“I learned a lot about how to deal with setbacks, and how to bounce back. We came back immediately. Even at Mid-Ohio, I hit the wall in practice but qualified on pole. So I feel really confident that I can bounce back after doing it a few times this year. Even the situation I’m in now, with the points being so close, will help me in the future. I’m a firm believer in everything happening for a reason so you just have to make the best of it."

With the single-race season finale at Watkins Glen looming large, Askew understandably prefers to focus on the things he can control and let the chips fall where they may.

“It would solidify my place on the Mazda Road to Indy and my career path. It would be my third scholarship in a year and a half, which is the kind of thing you dream of. I can’t believe that I’m in this situation – a year ago I was in the worst place of my life. I didn’t know if I could even continue racing so to be here, with the possibility of winning another scholarship and continuing my racing career, is surreal."