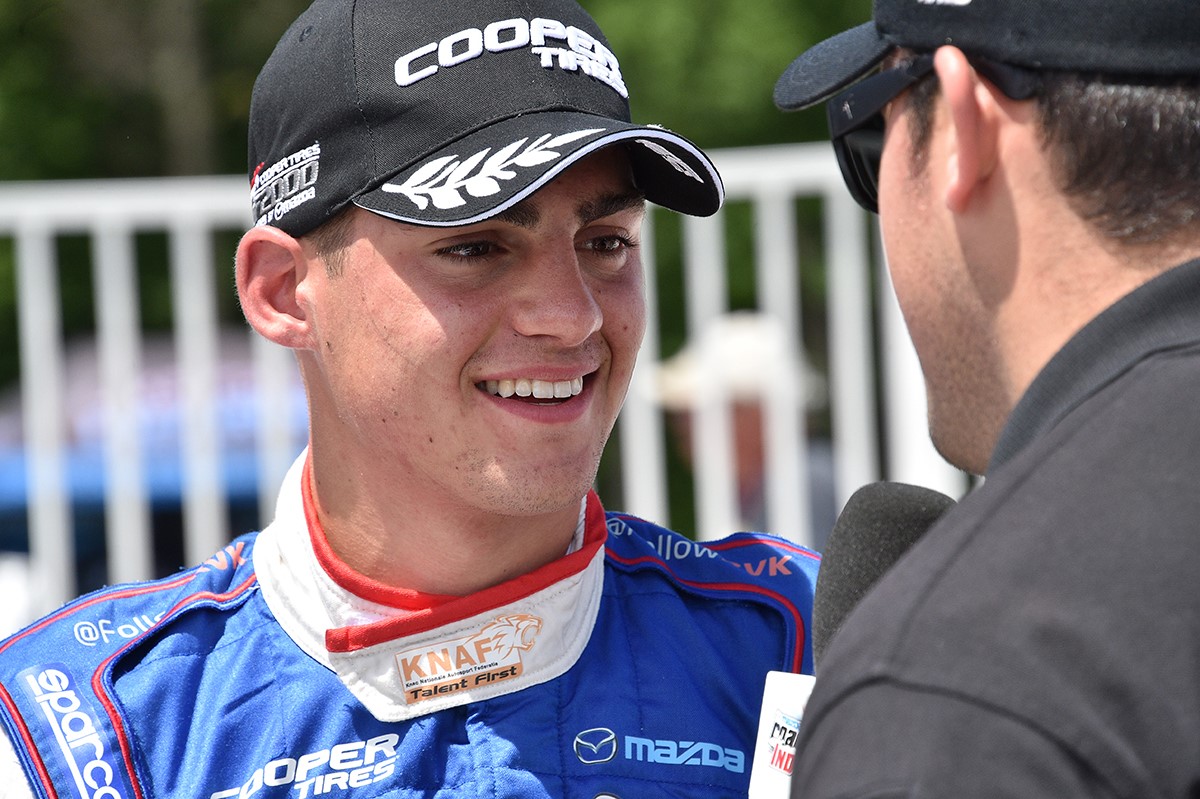 Rinus VeeKay of Pabst Racing and championship leader Oliver Askew of Cape Motorsports are separated by 13 points in the battle for the Cooper Tires USF2000 Championship Powered by Mazda crown entering the season finale at Watkins Glen International to be held September 2.

It was with great anticipation that the Tatuus USF-17 was revealed to the public last May at the Indianapolis Motor Speedway. But for those paying attention, a second important announcement was made that day: Dutch karting sensation Rinus VeeKay announced his intent to join the Cooper Tires USF2000 Championship Powered by Mazda in 2017, in what would be his first year of racing cars.

Fast forward 15 months, and 16-year-old VeeKay lies a mere 13 points back of the series championship lead with only one race remaining: the season finale at the lightning-fast Watkins Glen International. For VeeKay, it will be the culmination of one of the most momentous years of his life.

The VeeKay family began thinking about racing in the United States when the then 12-year-old Rinus won a ticket to race in the Rotax MAX Challenge Grand Finals in New Orleans in 2013. They got to know Richard Boisclair, the president of MAXSpeed, who invited them to the Rotax MAX Challenge U.S Grand Nationals in 2015. VeeKay finished second in the championship and joined their driver development program, earning an invitation to the Chris Griffis Memorial Test at Circuit of The Americas with Afterburner Autosport. He also tested with series champs Cape Motorsports.

The results of the test were a harbinger of things to come, as the young driver proved to be a quick study.

[adinserter name="GOOGLE AD"]"I had never driven a car before, so I was pretty slow in the beginning," VeeKay remembers. "But by the end of the weekend, I had the third-quickest time, behind two veterans. That was very cool. It was a great learning experience. The team would tell me ‘push harder’ but that was difficult, because I had never driven a car with wings. With the wings, you have more downforce so you can go quicker through a corner. As I got used to it, I went quicker and quicker until I had a spin. But being an F1 track, there was so much runoff, so it was okay."

The test brought the USF2000 series firmly into VeeKay’s focus. He decided to wait until the time was right, both in regard to the new Tatuus USF-17 coming online, but also for VeeKay to wrap his head around the idea of racing cars in America. In the meantime, he signed with Anders Krohn and CoForce International – and it was Krohn who suggested that his real last name (van Kalmthout) might be a mouthful for American media.

"We waited until the new car came out, and I wanted to wait until I was a little bit older as well, so my mentality would be right for my first year in cars. We were looking for a management team here in America so someone suggested Anders Krohn, whom my Dad knew. My Dad used to race in a stock car series in Europe, and Anders raced Formula Ford on the same weekends. Early on, Anders suggested we think about my name. He speaks a bit of Dutch and even he couldn’t pronounce it very well! We tried just having it be ‘VK’ until a Dutch journalist spelled it out and we thought it looked good."

VeeKay felt that the day of the USF-17 reveal was the best timing to announce his entry into the series, the first driver to announce entry in the new car. It was a huge moment for the young driver, to commit to a new country, a new series – and an entirely new racing genre. Now, he just needed a team.

"It was the right moment, with people watching the unveiling of the new car. It was the best way to let people here know who I was, and to let people know that I was coming into the series. It was a big weekend. We signed at first with Carlin Benik, but they pulled the plug on the program and we had to find a new team two days before the series’ pre-season test. Charles Crews is my manager and he knew the teams, so I tested with Pabst and Newman Wachs.

"It was the hardest decision of my life, but I went with Pabst. TÃµnis Kasemets is a big reason – I really had a good relationship with him right away. And the team has been together for six years so they are like a well-oiled machine."

VeeKay and the rest of the Mazda Road to Indy Presented by Cooper Tires began the season on the streets of St. Petersburg, Fla., alongside the Verizon IndyCar Series. With drivers having problems dealing with the bump in Turn Three, track officials changed the corner’s configuration – just one more thing for the young VeeKay to get used to.

"We only had one practice before qualifying, and we had two yellow-flag laps in qualifying to get used to the new corner. I pushed and tagged the wall with my left rear so I qualified 14th. That was a pretty bad start, I thought. I drove safe for the second race and qualified third. Race One was my first rolling start! We were very quick – the car was so quick – and I took position after position. I finished third, which was so great in my first race."

VeeKay continued that torrid pace through the early part of the season, earning four podiums in the first six races and settling into second place in the title chase behind Oliver Askew. His breakthrough victory came at a most opportune time: the home race for Oconomowoc, Wis.-based Pabst Racing. Starting third in Race One and from pole in Race Two, VeeKay made it an emotional sweep of both races at Road America.

"I love Road America – it has a European feel, like Spa-Francorchamps, but with an American atmosphere. When you drive, you can smell the barbecues. I knew it would be a hard weekend, with all the drafting, and it was a hard fight. The second race was less difficult just because the field was not so close together. But to win the race on the home track of Pabst Racing was so great. TÃµnis was crying on the radio."

VeeKay would add podium finishes in the next five races to close the gap to Askew significantly. Now comes the time where VeeKay shows the lessons gleaned during years of racing karts, racing with the kind of pressure that comes with the knowledge that a scholarship into the Pro Mazda Championship Presented by Cooper Tires is on the line.

"You start the race and just forget about everything else. Otherwise you can go crazy! Don’t worry about plans, just react to what’s happening. But to get 11 podiums in 13 races so far is a great year. It was a difficult beginning, but to get where we are now – I was reading on Twitter the other day, and I didn’t realize it, but I have never lost a position in a race. I have equaled my qualifying position, or moved up. It was the best start you can have in your first year in racing.

"And to drive every race in front of the IndyCar people is great. You can enjoy their races and learn from them, and the big teams can watch you. You’re all friends. The scholarship is such a special thing about the Mazda Road to Indy. And it’s all open – of course, we know Arie Luyendyk, but I’ve gotten to know Spencer Pigot and Simon Pagenaud this year, talking and getting tips. That’s what I like about America, how open it is."