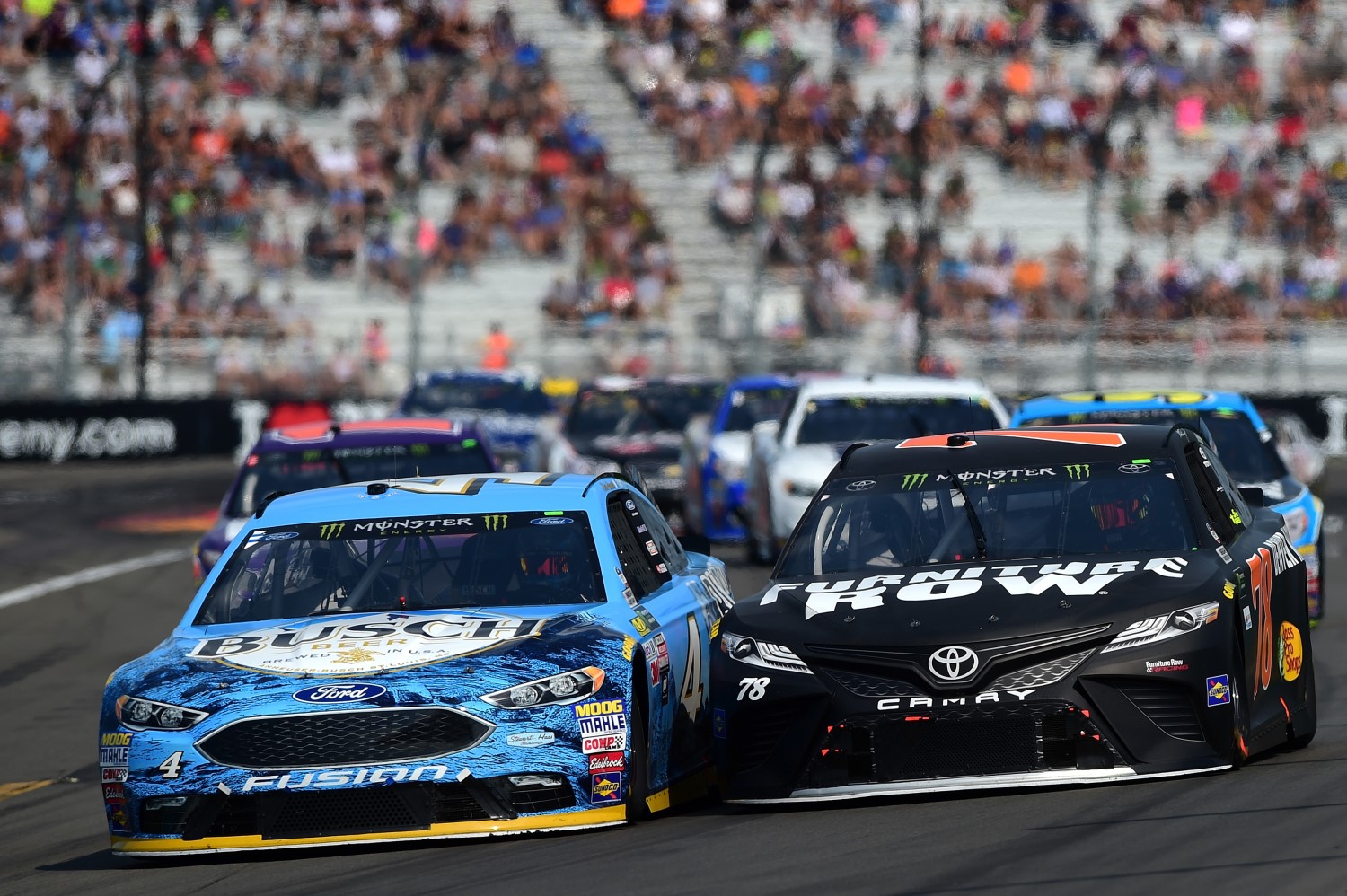 Truex saved just enough fuel to hold off a hard-charging Matt Kenseth and claim his first-ever Watkins Glen victory in front of a sold-out crowd.

"I’ve wanted to win here a long, long time, this is a special place," Truex said. "This is just an awesome racetrack. You want to win at road courses and now we have a win at both of them."

The New Jersey native considers Watkins Glen one of his home tracks and it’s a place where he spent plenty of time growing up around racing.

"I started coming here before I was driving anything but go-karts," Truex said. "Watching my dad race here a couple of times, coming here as a kid running through the garage, learning about race cars, and racing here in the Busch North Series myself before I got my big break – it definitely feels special to finally get a win here."

Truex let Brad Keselowski and Ryan Blaney by late in the race, feeling neither driver would be able to make the full distance on fuel. His gamble paid off as Keselowski relinquished the lead to pit with three laps to go and Blaney did the same a lap later. Kenseth had pit more recently than Truex, and was able to run full bore, but couldn’t close the gap in time.

[adinserter name="GOOGLE AD"]Truex took the lead for the final time in the 88th lap as, one by one, his competitors made last-ditch stops for fuel. Truex had just enough gas left for a burnout near the start/finish line.

Kyle Busch, who won the Coors Light Pole during qualifying earlier in the day, led 21 laps and landed an adventurous seventh-place finish.

Busch won the opening 20-lap stage — his ninth stage victory of the year — but made an extra pit stop after an errant lug nut wedged between the brake caliper and wheel on his left-front. He restarted 32nd but rallied into the top 10 by the end of the second stage.

But Busch, last week's winner at Pocono Raceway, was sent tumbling down the leaderboard after a midrace collision with Brad Keselowski, who lost control entering the backstretch chicane on Lap 45. Keselowski's car clipped Busch's, and both skidded off course before rejoining the event.

Keselowski appeared to lose control of his Team Penske No. 2 Ford entering the 2.45-mile course's bus-stop chicane on the 45th of a scheduled 90 laps in the I LOVE NEW YORK 355. Keselowski's car tangled with Busch's Joe Gibbs Racing No. 18 Toyota. Both cars spun off track without making further significant contact.

Busch pitted on the next lap, with Keselowski pitting shortly thereafter. Both drivers had spent the majority of the race among the top 10, but their midrace run-in knocked both outside the top 30.

"You all better keep me away from that (expletive) after the race," Busch radioed his No. 18 crew as the rejoined the race.

Busch pitted with five laps to go for fuel. Keselowski led 20 laps, but was forced to pit, surrendering the lead with three laps left. He finished 15th.

How does it feel to finally win at Watkins Glen after coming here growing up?

"I'm a little bit lost for words at the moment just because I've been thinking about this one a long time – all weekend, all day. Then, at the end there just it's so hard there to let guys pass you for the lead. You've just got to listen to your crew chief and luckily for me I've got the best one in the business and I just believe in him so much and I just do what he says and it seems to work out. I've just got to thank him (Cole Pearn, crew chief). It's been a tough week for him and thinking about his buddies parents and family. Just got to say thanks to Barney (Visser, team owner) and Furniture Row and Denver Mattress. Everybody back in Denver at the shop. TRD (Toyota Racing Development) and everybody in Costa Mesa for incredible engines and obviously the fuel mileage is pretty good too. Bass Pro, Tracker, Auto Owners, 5-Hour Energy, Wix, Garmin, Beechcraft, Cessna. Everybody that helps us. I guess this is our time. Just can't say enough about all of these guys and what they allowed me to do. I'm having the time of my life, that's all I can tell you."

How special is it to be in victory lane here at Watkins Glen?

"It's awesome. It means a lot to be in victory lane here at this race track. I've been coming here a long time and feel like we've been close and had a few slip away from us, but really excited. Great to see an awesome turnout here today with the fans and the sellout. Such a unique and great part of the country. This weather is amazing. We love coming up here to race. Pretty cool to check this one off the box as far as road courses. Everybody wants to win at these places so to get this one is special."

Can you take us through the conversation with Cole Pearn to save fuel late in the race?

"I just kept listening to him (Cole Pearn, crew chief). He said, ‘We need to slow down more. We need to slow down more.' It's the hardest thing in the world to do to slow down and let those guys pass you for the lead thinking that when you figure out that you have enough fuel to make it you can try to step up your pace again and they're just going to do the same. You never know what strategy everybody is on. You don't know how much gas they have or are saving. It's so tough. It's the hardest thing I've ever had to do just to slow down that much and watch those guys drive away. But, just Cole Pearn man, that's his job and I trust him and everything he says. Man, he tells me to do stuff and I just do it and I don't ask questions and here we are."

What did you do on the last lap and a half as Matt Kenseth was closing in on you?

"I just went as fast as I had to to keep him (Matt Kenseth) behind me and fortunately we were able to keep that gap and never ran out of gas. I wish I'd have went a little harder on that last lap so it wasn't quite so close because I got pretty nervous those last two corners, but it worked out perfect. What can I say? This is definitely an awesome day."

Did you think you would have four wins at this point in the season?

"This team has been incredible. What we did last year I felt like we underachieved really often and felt like we were a lot better team than we showed even though we had some good results. We've had some bad luck along the way this year but things have gone right and we've been more consistent. Just coming together as a group. This is our fourth year together and we just keep getting stronger. It takes time to get these things all to gel and to figure out all of these tracks and figure out how to deal with the ups and downs of this sport and we feel like we've done a good job of that. We paid our dues and now we're kind of reaping the benefits."