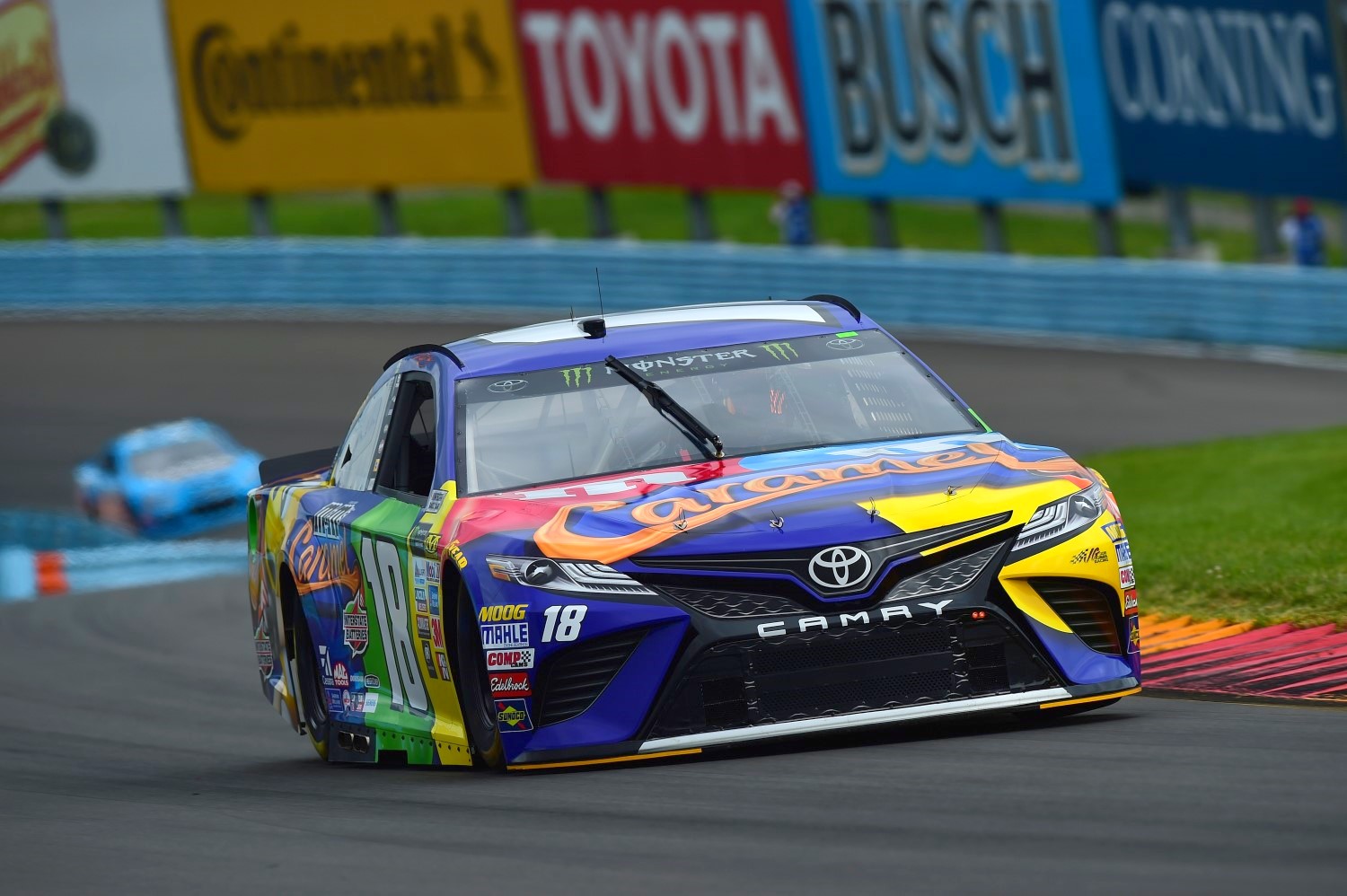 Kyle Busch looks to sweep the Watkins Glen weekend after winning the pole for the I Love New York 355 NASCAR Monster Cup race at the Glen in his #18 Toyota.

Busch came out fast in the second and final round of Coors Light Pole qualifying Sunday, charging to the top of the leaderboard at 126.925 mph and never surrendering first place as he captured his third consecutive pole.

Road course specialist AJ Allmendinger barely made the cut for for the final round of qualifying, with a fastest lap of 124.942 mph in the first round and will start seventh after a top speed of 125.368 mph in the second round. Joey Logano, who also needs a win to get into the playoffs after his one victory this season was encumbered, missed the cut and will start 13th after a first-round qualifying run at 124.897 mph.

Neither Denny Hamlin nor Clint Bowyer made an attempt in the second round of qualifying. They are slated to start 11th and 12th, respectively.

Road course ace Boris Said, who is making his final start in the Monster Energy Series, qualified 35th in a backup No. 33 Circle Sport/TMG Chevrolet after a ride through the grass in practice damaged the primary car.

What were the keys to earning today’s pole position?

“It was a really good lap for us and being able to have a fast race car and hit all the marks right to put us that quick out in front of the field feels good. The guys have done an amazing job and continue to do so and hopefully we can keep ourselves in the right position to try and win another one today."

How difficult is road course qualifying?

“It’s difficult. It’s certainly challenging because there’s too many corners you can give it up in, but here today all my guys and all of the guys that work on this M&M’s car did a great in being able to prepare a fast car. Being able to hit my marks in all those seven corners we call it was challenging, but yet when you do it right it feels good."

What advantage do you have starting at the front of the field here at Watkins Glen?

“Yeah, certainly last week qualifying up front, sitting on the pole and having that pit selection means well for us today and then qualifying up front again today was really good. So, staying upfront and keeping that clean air on our race car and being able to run the race how we want to run the race and strategize it how we want to strategize it is the best thing for us."

[adinserter name="GOOGLE AD"]What do you expect to see in today’s race?

“I’m hoping to lead every lap and then dominate this thing and win it, so that would be the best thing for our team and what we’ve been able to do this year and for how we want to win this race today."

What did you take from yesterday’s XFINITY Series race that will help you for today’s Cup Series race?

What does having the pole mean for the race today?

“I don’t know that it really means anything for the race today, but it shows that we have a fast race car. Being able to hit all the marks and being able to do what we need to do there for qualifying shows that we’ve got good speed in our race car, and hopefully keeping it upfront all day is going to keep our momentum rolling from what we were able to do last week into this week."

Do you feel the momentum is carrying over from last week and you can keep it rolling?

“I think we’ve been fast all year. We’ve been close, we’ve had fast race cars, we’ve had chances to win races and we just haven’t been able to close all of those races out. Anything can happen obviously. We feel as though that having fast race cars makes our day sometimes easier but sometimes harder. You look at Pocono where we were the fastest car and we didn’t pit and other people did and they beat us out by tires. So, same thing can happen but we’re hoping it doesn’t."