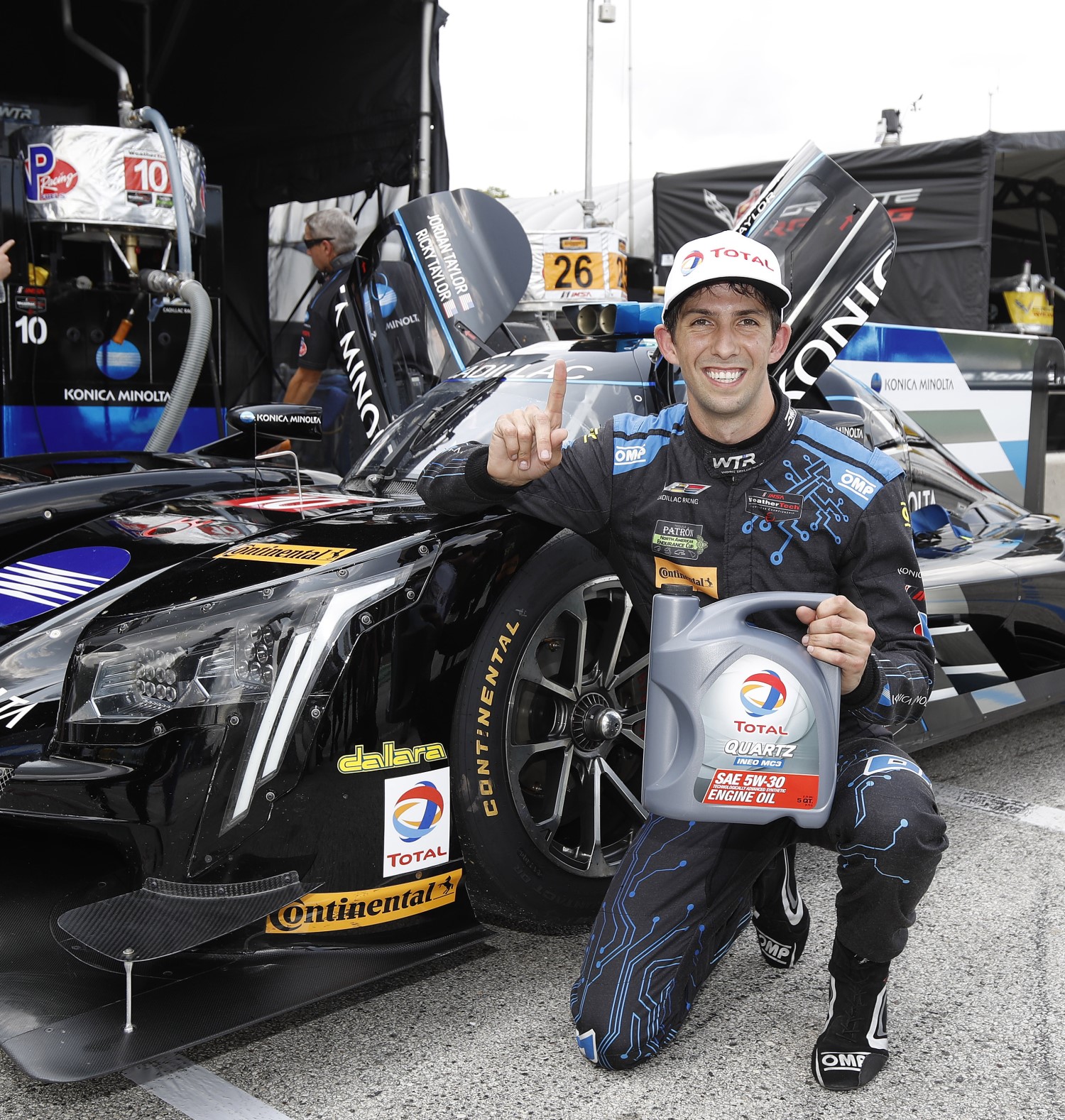 Two days after his 28th birthday, Taylor posted a best lap of 1 minute, 53.058 seconds (128.896 mph) in the No. 10 Konica Minolta Cadillac DPi-V.R he shares with his younger brother, Jordan Taylor, to secure the top starting spot in the 35-car field. The brothers go in search of their sixth victory of the season in Sunday’s race, but their first win since winning Round 5 on the season at the Chevrolet Sports Car Classic in Detroit in early June.

While he had a sizable advantage in qualifying, Ricky Taylor is expecting a tough battle in the two-hour, 40-minute race, which will be televised live on FS1 beginning at 2:30 p.m. ET and also will be broadcast by IMSA Radio on IMSA.com, RadioLeMans.com and SiriusXM Radio.

“I think tomorrow is going to be a different story," he said. “There are so many really good cars. Once the finishing guys get in there, it’s going to make for an interesting fight."

Jose Gutierrez earned a career-best starting spot and will join Ricky Taylor on the front row in the No. 52 PR1/Mathiasen Motorsports Ligier LM P2 car. Gutierrez’s best time was 1:54.075 (127.747 mph) in the car he shares with Olivier Pla.

James French has already enjoyed a number of special Prototype Challenge class victories this season, including wins in the Rolex 24 At Daytona, Mobil 1 Twelve Hours of Sebring Fueled by Fresh From Florida and all other races this season.

However, a victory in the Continental Tire Road Race Showcase at Road America would be extra special for the driver who hails from Sheboygan, Wisconsin. French took a great first step in that direction on Saturday, taking his sixth TOTAL Pole Award of the season in the No. 38 Performance Tech Motorsports ORECA FLM09.

“We made some changes on the car," French said. “We’ve had some issues balancing the low-speed and high-speed corners. It’s always a blast driving out here, it’s one of the most beautiful tracks on the planet, but I might be biased.

“This one has been elusive, I don’t know why. You’d think it would be the opposite. But we’re really looking forward to getting the victory here."

Dirk Mueller was in a league of his own in qualifying Saturday at Road America, leading a Ford GT sweep of the IMSA WeatherTech SportsCar Championship GT Le Mans (GTLM) class front row for Sunday’s Continental Tire Road Race Showcase.

It was Mueller’s 20th career IMSA pole, second in a row at Road America and a new class track record.

“I’d been on pole here last year and we had some opening tough luck when something broke on the first lap and we had to fix it on pit lane," said Mueller. “That’s a bit of unfinished business so we were really looking forward to this one."

Ford Chip Ganassi Racing has certainly not been a stranger at the front of the GTLM grid this season with three of the team’s four full-time drivers having earned poles in seven races to date.

While the Fords were undeniably quick again throughout the 15-minute qualifying session, BMW also continued to show the speed that has led to two wins and four consecutive podiums. Alexander Sims, who enters Road America second in the GTLM standings alongside co-driver Bill Auberlen in the No. 25 BMW Team RLL BMW M6 GTLM, qualified third, a mere 0.008 seconds behind Briscoe with a lap of 2:02.211.

The team Sims and Auberlen are chasing in the WeatherTech Championship standings, the No. 3 Corvette Racing C7.R of Antonio Garcia and Jan Magnussen, qualified eighth. The duo enters the weekend with a seven-point lead over the No. 25 BMW team.

Sunday’s Continental Tire Road Race Showcase goes green at 2:30 p.m. ET on Sunday and will be televised live on FS1 and streaming on FOX Sports GO. The race also will be broadcast on IMSA Radio – available on IMSA.com along with live timing & scoring data and in-car cameras, as well as on RadioLeMans.com and on SiriusXM Radio.

It was a Lamborghini versus BMW battle for the GT Daytona (GTD) class pole Saturday in qualifying for the Continental Tire Road Race Showcase at Road America, with the No. 16 Change Racing Lamborghini Huracan GT3 of Jeroen Mul ultimately prevailing over Jesse Krohn’s No. 96 Turner Motorsport BMW M6 GT3 for his first career TOTAL Pole Award in IMSA competition.

The TOTAL Pole Award was Lamborghini’s third this season, and the second career for Change Racing.

“It’s been a long time coming for us this year," said Mul. “It’s not a race, but it’s a good start. I’ve been practicing this track a lot on the simulator. It’s one of 11 new tracks for me this year. We were confident yesterday in the wet. Corey (Lewis), my teammate, did a great first practice in the wet to setup the car. We were a little bit anxious to see how it would run in the dry and it worked out."

Carrying the momentum from its first win of the season one race ago at Lime Rock Park, the No. 73 Park Place Motorsports Porsche 911 GT3 R of Patrick Lindsey qualified third with a lap of 2:07.149.

Five manufacturers made up the top five spots with the No. 15 Lexus RC F GT3 of Scott Pruett and No. 57 Audi R8 LMS GT3 of Andrew Davis qualifying fourth and fifth, respectively.