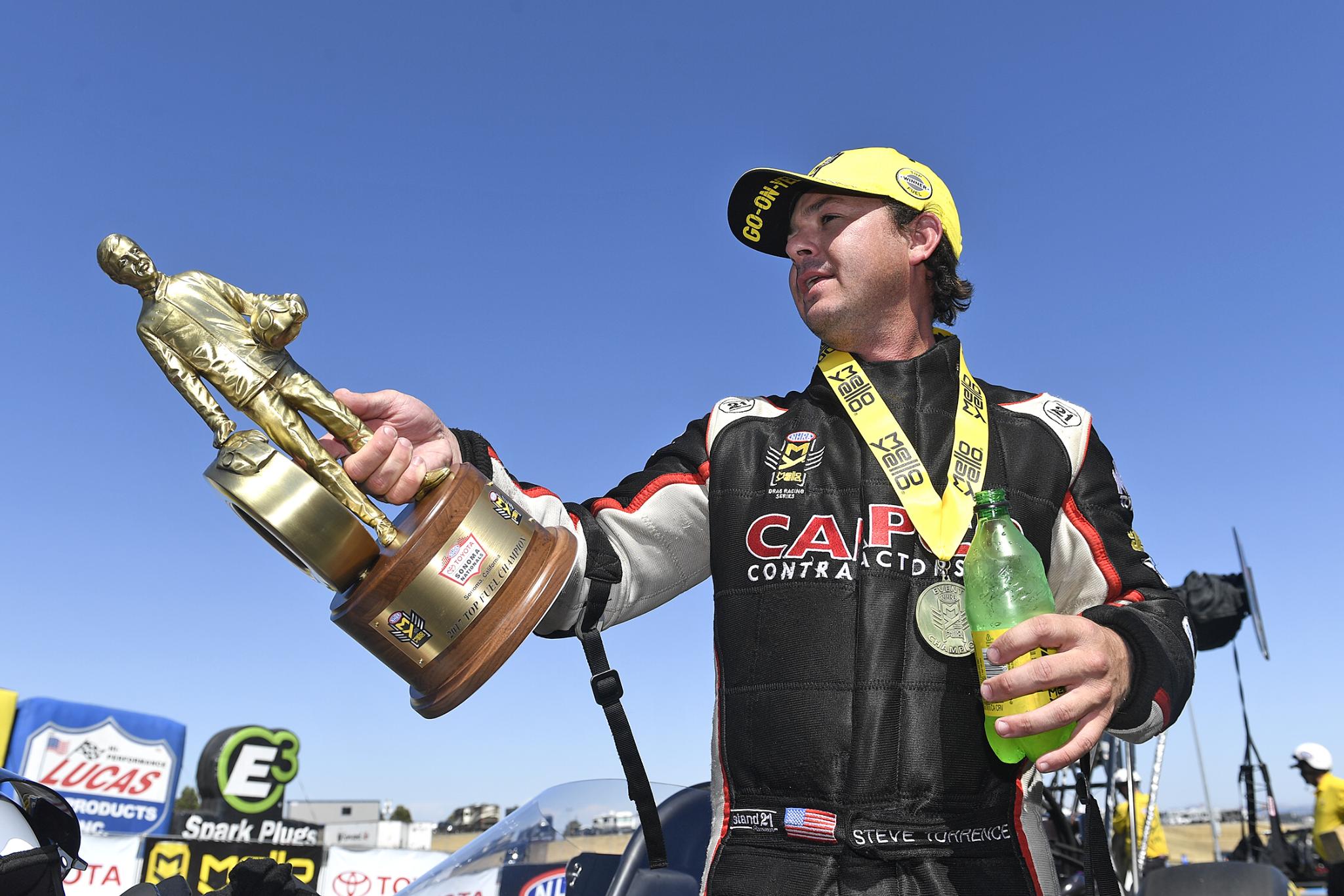 In the NHRA Mello Yello Drag Racing Series, the only Top Fuel driver who has been able to consistently keep the Don Schumacher Racing cars at bay has been Steve Torrence.

Torrence and his family-owned team have been like David to DSR's Goliath – with four of his prior five victories this season coming at the expense of DSR drivers in the final rounds.

Sunday in the Toyota NHRA Sonoma Nationals at Sonoma Raceway, Torrence beat out DSR's Antron Brown to collect his sixth victory – tops among the Top Fuel division – and stayed atop the division standings by 54 points over Brown.

Torrence bested Troy Coughlin Jr., Doug Kalitta, and Brittany Force to reach his eighth final round of the season and his fourth against Brown, taking down the four-time Sonoma winner with a pass of 3.784 seconds at 329.42 mph for his 14th-career victory.

"It's basically been just a dream season," Torrence said. "At the end of the day it's just a testament to my guys. We will continue to do what we're doing and we will do what we've done to get here."

In Funny Car, J.R. Todd raced to his first-career NHRA Funny Car victory with a win over Tim Wilkerson in the final round, coming the first African-American to score win in the division.

Todd raced past Alexis Dejoria, John Force and Jack Beckman to face Wilkerson, who went up in smoke in the final round while Todd ran 4.049 seconds at 323.27 mph in his DHL Toyota Camry to get the win light.

Todd, who spent the better part of 10 years running in the Top Fuel division where he collected nine victories, is in his first year of competition in Funny Car driving for Kalitta Motorsports. Sunday's finals marked the first time he's advanced all the way to the money round in Funny Car.

"Our car showed us a lot of promise in Denver which gave us hope coming into here," Todd stated. "We've been struggling so bad this season; I'm just happy to win a Funny Car. I was able to win here last year in Top Fuel and to be able to come back and do it again in Funny Car is pretty special."

In Pro Stock, rookie Tanner Gray took out points leader Bo Butner to win his third event of the season.

Gray picked up round wins over Alan Prusiensky, defending world champion Jason Line and No. 1 qualifier Drew Skillman to set his second final-round matchup against Butner, who lost out to Gray earlier this year at Las Vegas on a holeshot run in the finals.

"I'm proud of my guys," Gray stated. "This is the best I've seen them run the car. We've got to go back and keep working, though. If I can go into the Countdown in the top three, then you have a legitimate chance of winning the Championship. That's what my focus is now."

LE Tonglet followed up his win in Saturday's Mickey Thompson Tires Pro Bike Battle with a win over Matt Smith in the Pro Stock Motorcycle final for his fifth Wally of the season.

"It's a big benefit to win the battle the day before which builds your confidence going into Sunday," said Tonglet, who defeated Fred Camarena, Angie Smith and Hector Arana Jr. to advance to the final round. "I could hear him (Smith) the whole way and knew it was close. I wanted to look over very badly, but I just stayed tucked in and just stared at the win light and it lit which was exciting."