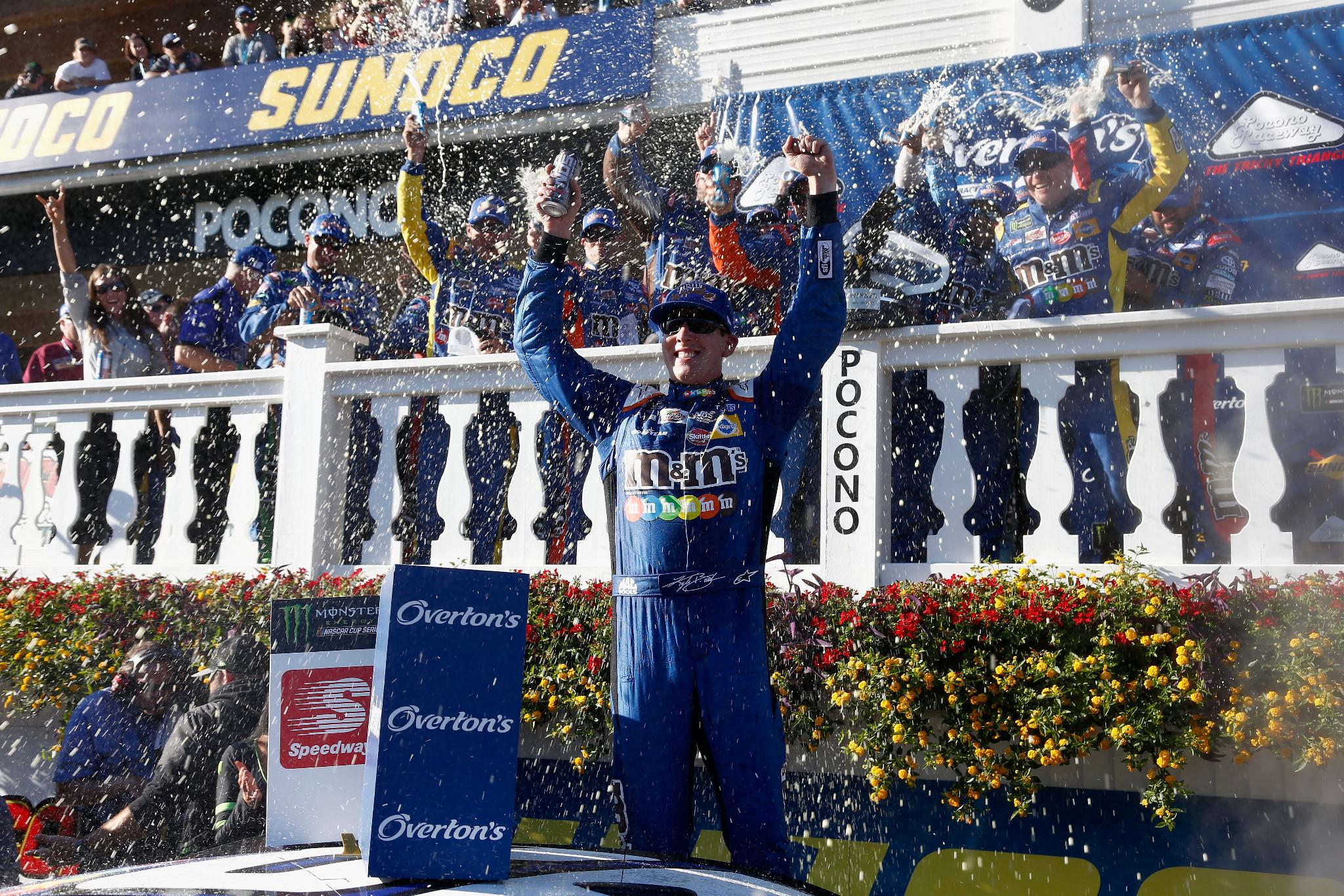 Barely more than three hours after the Pocono crowd greeted Kyle Busch with a chorus of boos during driver introductions, Kyle Busch made converts of the fans in the grandstands – at least a large portion of them – with a spectacular burnout after his long-awaited victory in the Overton's 400.

Benefitting from a splendid pit call by crew chief Adam Stevens, Busch charged through the field after his final stop and pulled away to beat runner-up Kevin Harvick to the finish line by a whopping 6.178 seconds, breaking a career-long 36-race drought and giving Toyota its 100th victory in the Monster Energy NASCAR Cup Series.

The win was Busch's first at Pocono Raceway, leaving Charlotte Motor Speedway as the only active Cup track the driver of the No. 18 Camry hasn't conquered.

Having won his fourth Pocono pole earlier in the day – on the first instance where the Monster Energy Series drivers have qualified and raced on the same day in NASCAR's modern era – Busch recorded the 39th victory of his career when he took the checkered flag.

"It's been a frustrating year, but an awesome day today," Busch said in Victory Lane. "This is also a meaningful win for me in another way. This is the first time I've been to victory lane in a points-paying race since my grandmother passed away. This one's for her, and she's smiling down on us here today, and I appreciate that."

When Busch finally hit pit lane on Lap 135, he left with fresher tires than those on the cars ahead of him and in short order, picked off Joe Gibbs Racing teammate Denny Hamlin, who finished fourth, and Truex.

Busch and crew chief Adam Stevens had discussed the strategy before the race.

"I knew what he was thinking and that's what it all came down to," Busch said. "We didn't really outsmart anyone today. We just kind of played our race and our own strategy and thought about it a little differently than others, and it worked out for us."

Busch caught Harvick in Turn 3 on Lap 144 of 160, and when Harvick got loose and slowed in the corner, Busch gave the No. 4 Ford an inadvertent shot to the rear bumper. Busch flashed past Harvick and was gone.

"I was trying to stay on the bottom to park the thing to get going and he had a good run. Kyle had the class of the field all weekend. His car was really, really fast. He got the pole. Got the win. Pretty much just charged through the field. We definitely have a little bit of work to do. I feel like we got closer and closer. I feel like we raced around all the Toyotas all day."

Busch collected his eighth stage win of the season when he took the green/checkered flag at the end of Lap 50, and the victory gave him an additional five playoff points, bringing his season total to 13, tied for third in that category with Kyle Larson and Brad Keselowski.

Clint Bowyer collected his first stage win of the season on Lap 100, after Truex, Busch, Harvick and Hamlin all came to pit road just before the end of the stage to set up their prospects for a race win. Bowyer finished sixth behind Keselowski.

Daniel Suarez, Erik Jones, Matt Kenseth (who recovered from a spin in Turn 3 on the first lap) and Chase Elliott completed the top 10.

Was the word ‘finally’ the overwhelming thought when you crossed the finish line?

“For today, that was the word. It’s been a frustrating year and this certainly relieves a little bit of that – I wouldn’t say all of it. Adam (Stevens, crew chief) and these guys did an awesome job today. I can’t say enough about this M&M’s Caramel Camry – Toyota, this is their 100th Monster Energy Cup Series win. I can’t say enough about all of our partners and everyone on this team. All these guys, the pit crew – they do a great job each and every week. We had to rely on them on that final stop so we didn’t lose too much time to those guys because we had so much distance that we were letting them have it on us with those fresher tires that they had. It’s been a frustrating year, but an awesome day today."

[adinserter name="GOOGLE AD"]Were you comfortable with Adam’s strategy for this race?

“I knew exactly what he was doing, we talked about that before. I was all on board with everything we had going on there. Our car was really fast on the long run with nobody in front of us – we were just flying there. When those guys were in front of us, we were running 53.30s or whatever and then they dumped off and peeled off and we had clean air and we were running 52.50s – faster than they were on older tires. We were fine. You can’t get through traffic and it’s kind of frustrating in that regard. This is also a meaningful win for me in another way, this is the first time I’ve been to victory lane in a points paying race since my grandmother passed away. This one’s for her and she’s smiling down on us here today and I appreciate that."

How were you able to catch the leaders in the closing laps with the strategy?

“I knew what Adam (Stevens, crew chief) was doing and I knew what he was thinking and I was all on board for that. When all those guys dumped off, they were all in traffic with one another and they were slowing each other down just with the aerodynamic deficit so they were running 53.30s or whatever when I was with them and then they pulled off to pit road and I could run 52.60s and 80s so I was a half-a-second faster and just being able to run those laps in clean air and kind of pick off a few seconds from what they were going to have when they cycled back to old tires again, then that was kind of making up ground for us and we had to go to the long, long end of that before we put our tires on to make our fresh tires and our mechanical grip make up for the deficit that we gave them with them having fresher tires before us. I knew what he was thinking and that’s what it all came down to. We didn’t really out smart anyone today, we just kind of played our race and our own strategy and thought about it a little differently than others and it worked out for us."

What was causing your handling issues midway through the race?

“Traffic, I got by Brad (Keselowski) on the outside there and got a run down the frontstretch and was clear of him, but he had help from behind him that kept him right on my tail so when we all kind of pulled off into turn one under the brakes and at my rear bumper and it made me really, really loose – I about wrecked. Glad I held onto it there so that was interesting and I just heated up the right rear for the next few laps and couldn’t do anything. Once the car was settled down and ready to go forward again, I was at a deficit with just the aerodynamics so I couldn’t make up any time on anybody. We just played a different strategy today and that worked for us. Really excited to get this M&M’s Caramel Camry to victory lane again and thanks to Interstate Batteries – this is Toyota’s 100th win in the Monster Energy Cup Series so this is awesome for them, for us, for me and then of course the fans. We appreciate the KB fans all here today and everybody. It’s been a long time coming trying to win a race here at Pocono. This one means a lot and it’s pretty special for all of us, this team and everybody at Joe Gibbs Racing."

What does it mean to score Toyota’s 100th Cup victory and get a victory at Pocono?

“It’s awesome, anytime you’re able to accomplish something it means extra – you’re glad to be the guy to be able to do it. I have won at that other race track in the Monster Energy Cup Series, there’s an asterisk next to that one. It never ends, there’s always something. I was hoping this one was the last one, but there’s still one more to go so we’ll figure that out."