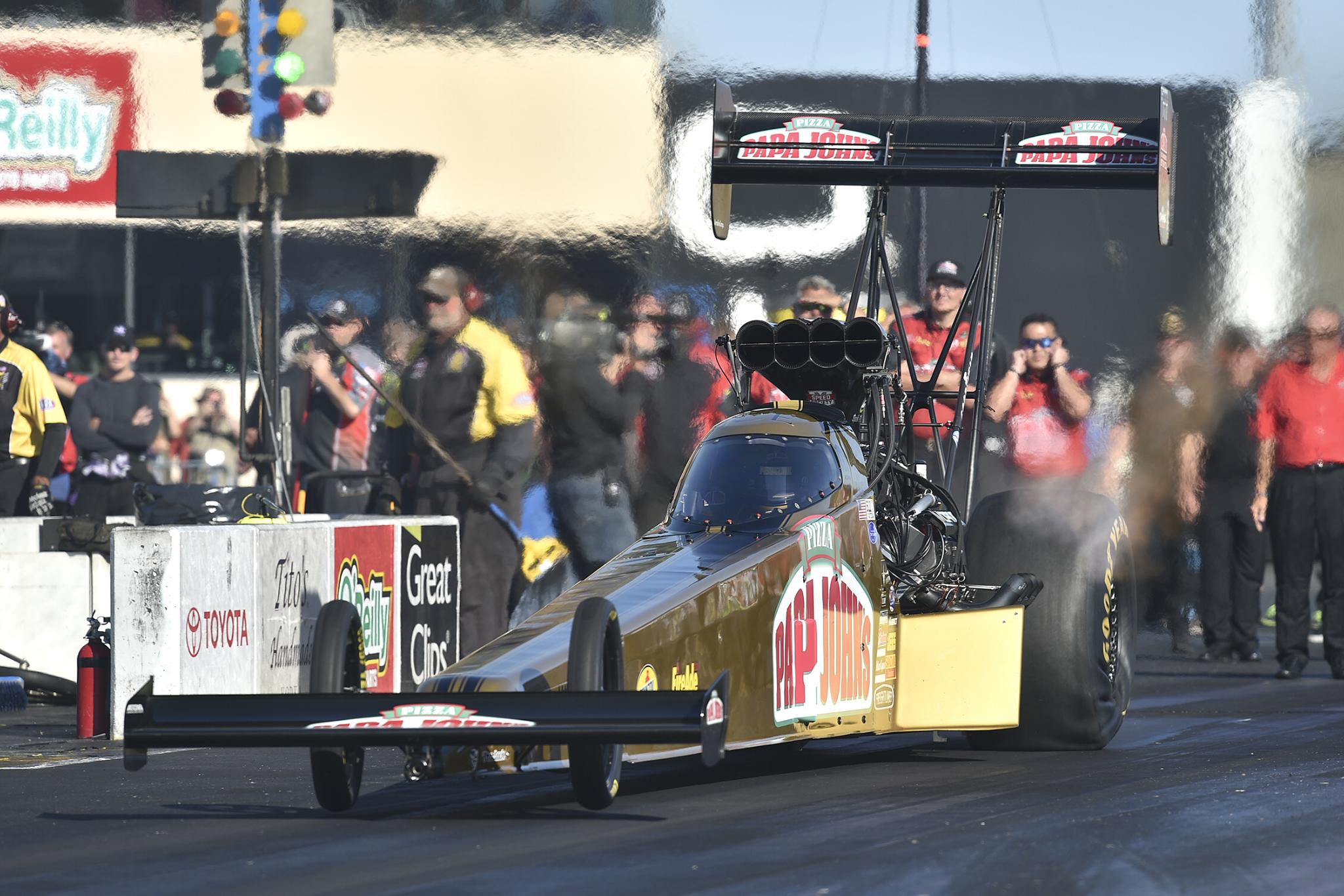 In Top Fuel, no one was able to best the track record E.T. that Pritchett ran on Friday. She earned her fifth No. 1 qualifying position of the season and sixth of her career with a run of 3.669 at 304.80 in her Papa John's dragster. She'll face Terry Haddock in the first round.

"This is the highest confidence we can have heading into a Sunday," Pritchett said. "Keeping in mind that anything can happen on Sunday; no matter who you're racing. Today we took this track extremely serious trying to get down it in similar conditions for tomorrow."

Brittany Force piloted her Monster Energy dragster to the No. 2 spot after a pass of 3.689 at 330.63 and is paired against Steve Chrisman.

Hight's national record speed of 339.87 with a time of 3.807 in his Auto Club of Southern California / California Highway Patrol Chevrolet Camaro from Friday earned him back-to-back No. 1 qualifying positions. This is his third of the season and 52nd of his career. He'll line up against Tim Gibbons to open eliminations.

"Things are definitely going in the right direction for us," Hight stated. "It's a big deal. Everyone wants to talk about sweeping the swing. We've got one leg down and coming here to make the quickest run in history is pretty awesome."

Hight's team owner and 16-time world champion, John Force, powered his PEAK Chevrolet Camaro to a pass of 3.848 at 337.16 to secure the No. 2 slot. He will face Jeff Diehl in the first round of eliminations.

Skillman, in his Ray Skillman Chevrolet Camaro, earned the top spot in Pro Stock with his run of 6.538 at 211.36 during the third qualifying session. This is his second No. 1 qualifying position of the season and fifth of his career.

Points leader Bo Butner drove his Jim Butner's Auto Chevrolet Camaro to a pass of 6.546 at 211.63 for second and will see two-time world champion Erica Enders in eliminations.

In Pro Stock Motorcycle, Smith powered his Polaris Victory Magnum to a pass of 6.771 at 198.70 during the final qualifying session. This is his second No. 1 qualifier of the season and 26th of his career. He will face Steve Johnson in the first round of eliminations.

"I feel good, very good heading into tomorrow," Smith stated. "We struggled all weekend and blowing the tire way in. We were running big speeds, but just couldn't get off the line. Ended up being a tire problem, but we're excited for tomorrow."

Eliminations at the Toyota NHRA Sonoma Nationals begin on Sunday at 11 a.m. at Sonoma Raceway.