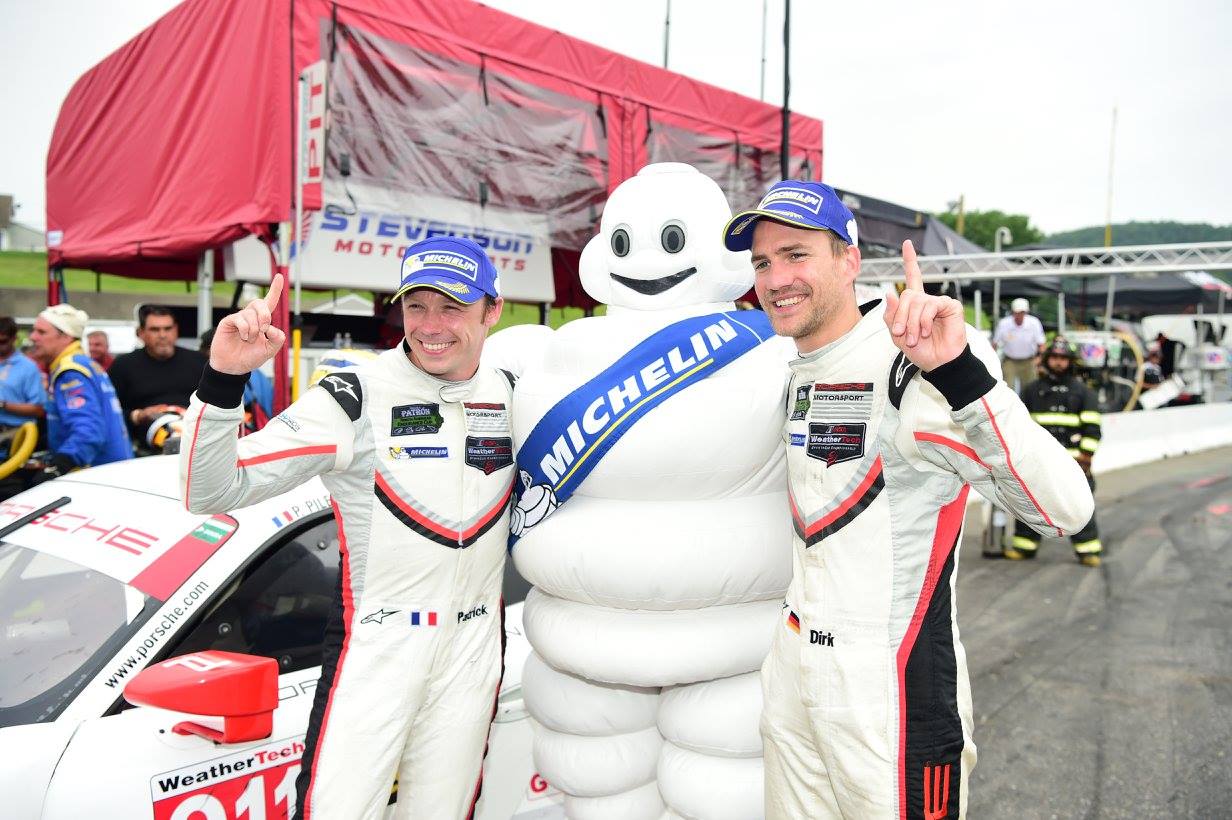 LAKEVILLE, Conn. – The two-car Porsche GT Team has come on strong since returning from the traditional midseason break for IMSA WeatherTech SportsCar Championship teams to compete in the 24 Hours of Le Mans, and both cars delivered on Saturday afternoon at Lime Rock Park, when the team finished 1-2 in the two-hour and 40-minute Northeast Grand Prix.

Pilet crossed the stripe 14.5 seconds ahead of Laurens Vanthoor in the No. 912 Porsche that Gianmaria “Gimmi" Bruni started from the pole position. It was the first victory for the revolutionary new Porsche 911 RSR, the first one to be configured with the engine in front of the rear axle.

The No. 911 Porsche ran inside the top three positions throughout the race. Werner qualified third, but jumped to second at the start of the race and ran behind Bruni for the first 49 minutes of the race before taking the lead when Bruni came in for his first pit stop.

[adinserter name="GOOGLE AD"]Werner pitted two laps later to turn the car over to Pilet, who rejoined the race in third place, but one spot ahead of Vanthoor in the No. 912. Pilet took the lead for the first time an hour and 17 minutes into the race once the first pit-stop cycle was completed.

Pilet lost the lead when he made his second and final pit stop, but reclaimed the top spot for the final time when Antonio Garcia pitted the No. 3 Corvette Racing Chevrolet Corvette C7.R from the lead. He would not be challenged the rest of the way en route to his eighth IMSA race victory.

“It means a lot," Pilet said. “Since the first race of the season, we’ve fought for the victory but never achieved that. It was great because everybody worked so hard. It went smooth all weekend since first practice. Both cars were really quick, especially the 912. We managed to get a really good pace during the long runs and we knew it was a key here to be strong during the long runs and it went perfectly."

It was Werner’s ninth career victory in IMSA history – including previous wins in both the GRAND-AM Rolex Sports Car Series and American Le Mans Series – and his third in the WeatherTech Championship. Werner joined the Porsche GT Team this season after spending the past several seasons with BMW Team RLL.

“For me personally it’s a great day," Werner said. “I just joined Porsche as a factory driver and to be the first together with Patrick, yeah, it’s a very good feeling. But it’s for the team and it feels good because they put in all the work, especially developing the car for such a long time, I think it’s over a year now.

“The car has been driven and tested and its sweet because the last couple of races I think we were already good enough to win, but we always had a little something go wrong. So now I am very happy, especially a 1-2 for Porsche and in GTD also to have two podiums. It’s a perfect day."

It was the first win for the Porsche GT Team since last September’s race at Circuit of The Americas, which also was the last time the team swept the top two spots in GTLM.

A fierce battle for the final podium spot between Martin Tomczyk in the No. 24 BMW Team RLL BMW M6 GTLM and Garcia in the Corvette went to Tomczyk and his co-driver, John Edwards, by a slim margin. Garcia and co-driver Jan Magnussen wound up fourth in the No. 3 entry ahead of Ryan Briscoe and Richard Westbrook, who rounded out the top five in the No. 67 Ford Chip Ganassi Racing Ford GT.

The No. 67 Ford GT also claimed the DEKRA Green Award. The award – developed in a partnership between IMSA, the Department of Energy (DOE), Environmental Protection Agency (EPA) and the Society of Automotive Engineers (SAE) International – recognizes the cleanest, fastest and most efficient GTLM car in each race.

Complete results are available at Results.IMSA.com.

The pairing – in the No. 3 Mobil 1/SiriusXM Chevrolet Corvette C7.R – now lead the Driver’s Championship by seven points, and Chevrolet increased its lead in the Manufacturer’s standings to four points after seven of 11 events. Garcia also set the fastest lap of the race to earn one critical bonus point.

The No. 4 Mobil 1/SiriusXM Chevrolet Corvette C7.R of Oliver Gavin and Tommy Milner finished eighth after early-race contact on the rough-and-tumble circuit. The No. 4 Corvette was forced to return to the paddock twice for repairs – an example of the never-give-up attitude that defines Corvette Racing.

Magnussen started sixth and drove the first 51 minutes before handing off to Garcia from fourth place. Garcia rejoined in fifth and eventually cycled through to the lead as different pit stop strategies emerged into the final hour. The No. 3 Corvette pitted from first with 47 minutes left and was one of the final GTLM cars to stop for fuel and fresh Michelin tires.

The strategy very nearly paid off with a podium finish, but the tight confines of Lime Rock and traffic stymied Garcia’s changes.

Park Place Motorsports capped off a Porsche sweep Saturday at Lime Rock Park, with Joerg Bergmeister and Patrick Lindsey driving the No. 73 Porsche 911 GT3.R to the GT Daytona (GTD) class victory in the Northeast Grand Prix.

It was the first IMSA WeatherTech SportsCar Championship win for Park Place since the Motul Petit Le Mans at Road Atlanta in October, 2015, and completed a banner race for Porsche, which also went 1-2 in the GT Le Mans (GTLM) class.

Bergmeister inherited the lead on the final series of green flag pit stops with 59 minutes remaining and went on to lead the race’s final 57 laps. The two hour, 40-minute race was run caution free for the first time in the WeatherTech Championship since another GT-only race at VIRginia International Raceway in 2015.

“Basically, we tried an undercut and pitted first for the last stop, so I knew it was going to be really difficult to manage the tires through a long stint," said Bergmeister, who is no stranger to the top step of Lime Rock’s podium, winning in seven of 10 IMSA starts. “Once I got in the lead and passed Bryan (Sellers) I tried to be smooth and save the tires. He tried to do the same, but when Patrick (Long) came up and he was defending, I was able to check out a little bit."

“It’s really just amazing, this is a really tough track to setup a car for and the Park Place guys did a stellar job," added Lindsey. “And Joerg is just a master at this place, he brought it home in spectacular fashion. He made it look easy. It’s good to finally get a victory for Park Place and everybody back in Dallas."

Rounding out the podium was the No. 28 Porsche 911 GT3.R of Patrick Long and Daniel Morad. It was the second WeatherTech Championship start of the season for Long, who got the call to drive just one week ago, and his first for Alegra Motorsports. Long took the lead from polesitter Snow 35 minutes into the race and led the next 17 laps before losing the lead on the first round of pit stops.

The points-leading No. 63 Ferrari 488 GT3 of Christina Nielsen and Alessandro Balzan finished sixth, the first time the duo missed the podium since the season-opening Rolex 24 At Daytona. Trouble for the team’s closest championship competitors, however, keeps the team atop the GTD standings with four races remaining.

Starting from ninth position, Nielsen moved the no. 63 Scuderia Corsa Ferrari 488 GT3 forward several positions during a long opening stint in which the Scuderia Corsa team made the most of the fuel mileage of the 488 GT3. After one hour, Nielsen turned the car over to Balzan who emerged from the pits in sixth position.

Passing opportunities are at a premium on the 1.5-mile Lime Rock Park circuit and lapped traffic became a factor in the second half of the race. With numerous incidents occuring throughout the GT-Daytona field, Balzan steered the Ferrari away from trouble and finished the race in sixth place to consolidate his lead over the team’s championship rivals. The two hour and forty-minute race ran caution free.

The next race for the IMSA Sportscar Championship will be the Road Race Showcase at Road America in Elkhart Lake, Wisconsin on August 3-6.