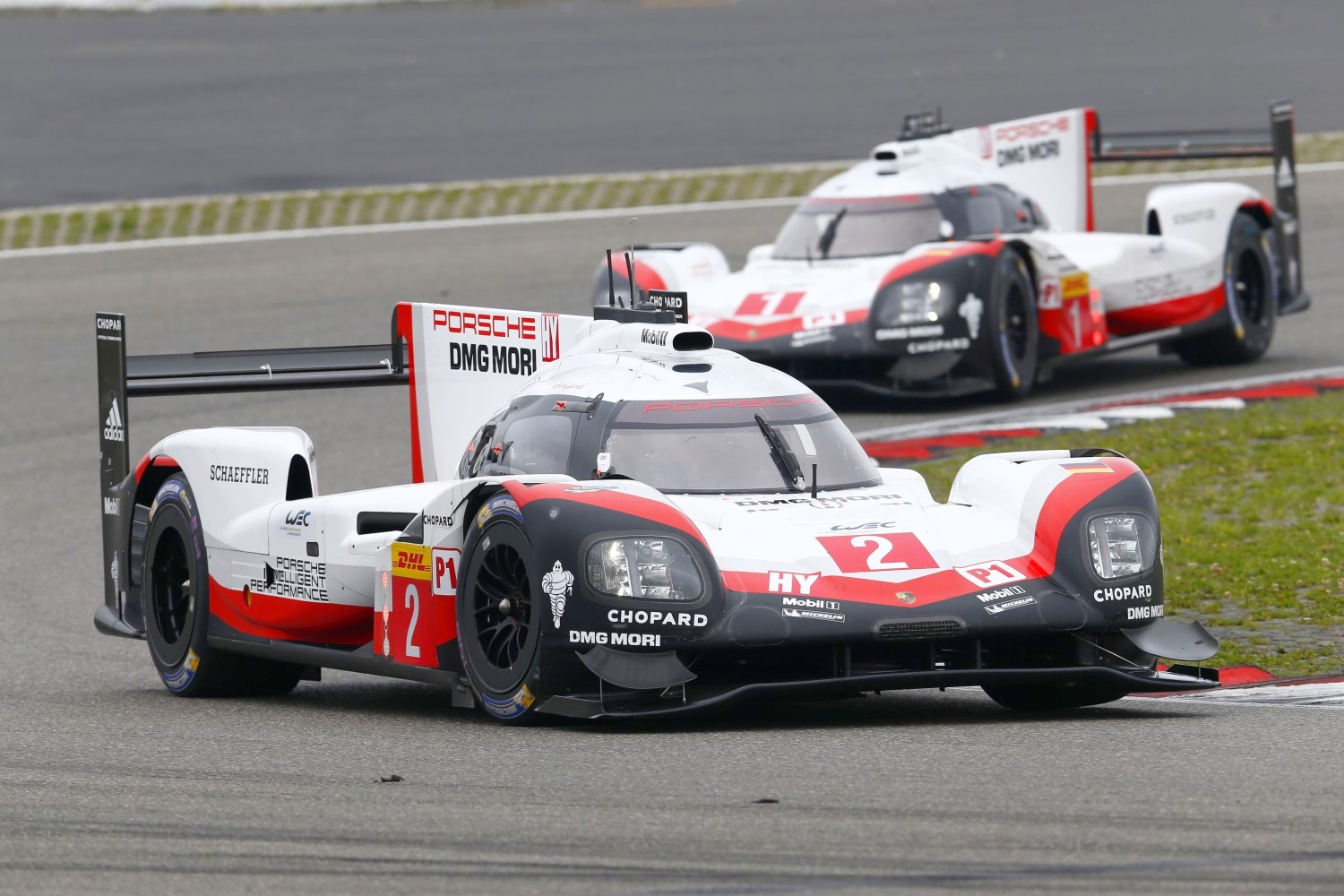 After having achieved the third consecutive Le Mans victory, Porsche also managed a hattrick in the six-hour race at the Nurburgring: Like in 2015 and 2016, Timo Bernhard (DE) and Brendon Hartley (NZ) climbed on to the top step of the podium. In 2017 the duo were joined for the first time by Earl Bamber (NZ) in winning this race. It was the second race triumph for the Porsche LMP Team in 2017 and the 15th in total for the 919 Hybrid since its debut in 2014.

After light rain in the morning, the fourth of nine championship rounds was held in dry conditions. Porsche has now scored 154 points in the manufacturers’ world championship with a 39.5 points gap to Toyota. In the drivers’ rankings, Bamber/Bernhard/Hartley have 108 points in total, earning them an advantage of 30 points over the best placed Toyota trio. Meanwhile Jani/Lotterer/Tandy move up to fourth position in the championship (46 points).

[adinserter name="GOOGLE AD"]The two Porsches were rarely more than four or five seconds apart during the entire race but it was the reigning title-winning car which triumphed to give both Bernhard and Hartley their 10th WEC wins and Bamber his 3rd.

It was a thrilling race between the two Porsche 919 Hybrid racers which saw the lead swapped numerous times. At one stage, in the fourth hour, Bamber lost the lead to his fellow 2015 Le Mans winner Nick Tandy, after having to take avoiding action when Tor Graves spun his CEFC Manor TRS Racing LMP2 car in front of the Kiwi at the chicane.

The result today ensures that Hartley, Bernhard and Bamber have extended their lead in the championship to 30 points as the European leg of the 2017 WEC comes to an end.

Andre Lotterer, Neel Jani and Nick Tandy ensured a Porsche 1-2 at their home event, taking the runners-up position after leading for large periods of the race but the trio lost the lead at the final pit stop.

The pole sitting No.7 Toyota of Kamui Kobayashi, Jose Maria Lopez and Mike Conway took third place after leading in the early stages as Kobayashi converted pole position into track position. The Toyota TS050 HYBRID fell back, however, and finished just under a lap down on the winning Porsche.

Winners of the first two races at Silverstone and Spa, the No.8 Toyota Gazoo Racing trio of Anthony Davidson, Kazuki Nakajima and Sebastien Buemi, suffered a frustrating race as an enforced change of fuel pump on the first lap put them out of contention. The car did though recover well, and claim fourth place points.

The Jackie Chan DC Racing team celebrated another win, their third in four races, with the Oliver Jarvis, Thomas Laurent and Ho-Pin Tung crewed No.38 ORECA-Gibson. They led for the majority of the race after wresting the lead from the No.31 Vaillante Rebellion.

The only small issue for the winning LMP2 car was a quick change of rear bodywork in the fourth hour. Jarvis, Tung and Laurent’s hat-trick of wins so far in 2017 ensures they now enjoy a huge 46-point in the LMP2 Drivers' Championship.

Bruno Senna led in the No.31 for the Vaillante Rebellion team early on, but lost out to Oliver Jarvis in traffic which ensured that he and his teammates Filipe Albuquerque and Julien Canal took second position for the third time this season.

Completing the podium in LMP2 was the reigning LMP2 champions, the No.36 Signatech Alpine car crewed by Nicolas Lapierre, Gustavo Menezes and Matt Rao. Lapierre made a thrilling move on the No.13 Vaillante Rebellion ORECA Gibson in the dying minutes of the race to claim the position.

52,000 spectators enjoyed the fourth round of the 2017 FIA WEC, an event which saw a remarkable 510 overtakes for position. It was also one of the cleanest WEC ever races with no caution periods at all, and less than five minutes of on-track yellow flags.

After the summer break, the fifth round of the FIA World Endurance Championship will take place on September 3rd in Mexico City.

Provisional results and championship positions can be found HERE

The No.51 AF Corse Ferrari 488 GTE driven by James Calado and Alessandro Pier Guidi took a first win of the season after the pair maximized their tires and set-up to the fullest, heading home the two Porsche GT Team 911 RSR entries.

The British driver took the lead from the No.92 Porsche with an incisive move and then built an impressive gap to hand over to Pier Guidi who crossed the line 50-seconds ahead of the next-placed car, taking Ferrari’s second class win of the season.

Porsche took second and third places after enjoying its best race weekend of the season with the new-look 911 RSR model.

The No.91 car of Frederic Makowiecki and Richard Lietz headed home the No.92 sister car of Kevin Estre and Michael Christensen by just eight seconds.

A fifth-place finish for Harry Tincknell and Andy Priaulx in the No.67 Ford GT was enough for them to retain the lead in the GT World Endurance Drivers’ Championship. They head Makowiecki and Lietz by 11 points as the WEC heads to Mexico City in early September.

LMGTE Am saw a popular home victory for Dempsey-Proton Racing. Christian Ried, Matteo Cairoli and Marvin Dienst held off the Spirit of Race Ferrari and Aston Martin Racing challenge to ensure that both Dienst and Cairoli took their first ever WEC wins. It was also Christian Ried’s first WEC class victory since Bahrain in 2012.

The Dempsey-Proton team fought hard for the win as they hunted down the Aston Martin Vantage of Pedro Lamy, Mathias Lauda and Paul Dalla Lana, coming under threat too from the Spirit of Race Ferrari which eventually finished took second place points for Miguel Molina, Francesco Castellacci and Thomas Flohr.

The winning margin for the Dempsey Proton Porsche was just 4.3 seconds as the class provided another nail-biting finish.

52,000 spectators enjoyed the fourth round of the 2017 FIA WEC, an event which saw a remarkable 510 overtakes for position. It was also one of the cleanest WEC ever races with no caution periods at all, and less than five minutes of on-track yellow flags.

The next round of the Championship will be the 6 Hours of Mexico in Mexico City on 3rd September. See you all there!

Provisional results and championship positions can be found HERE