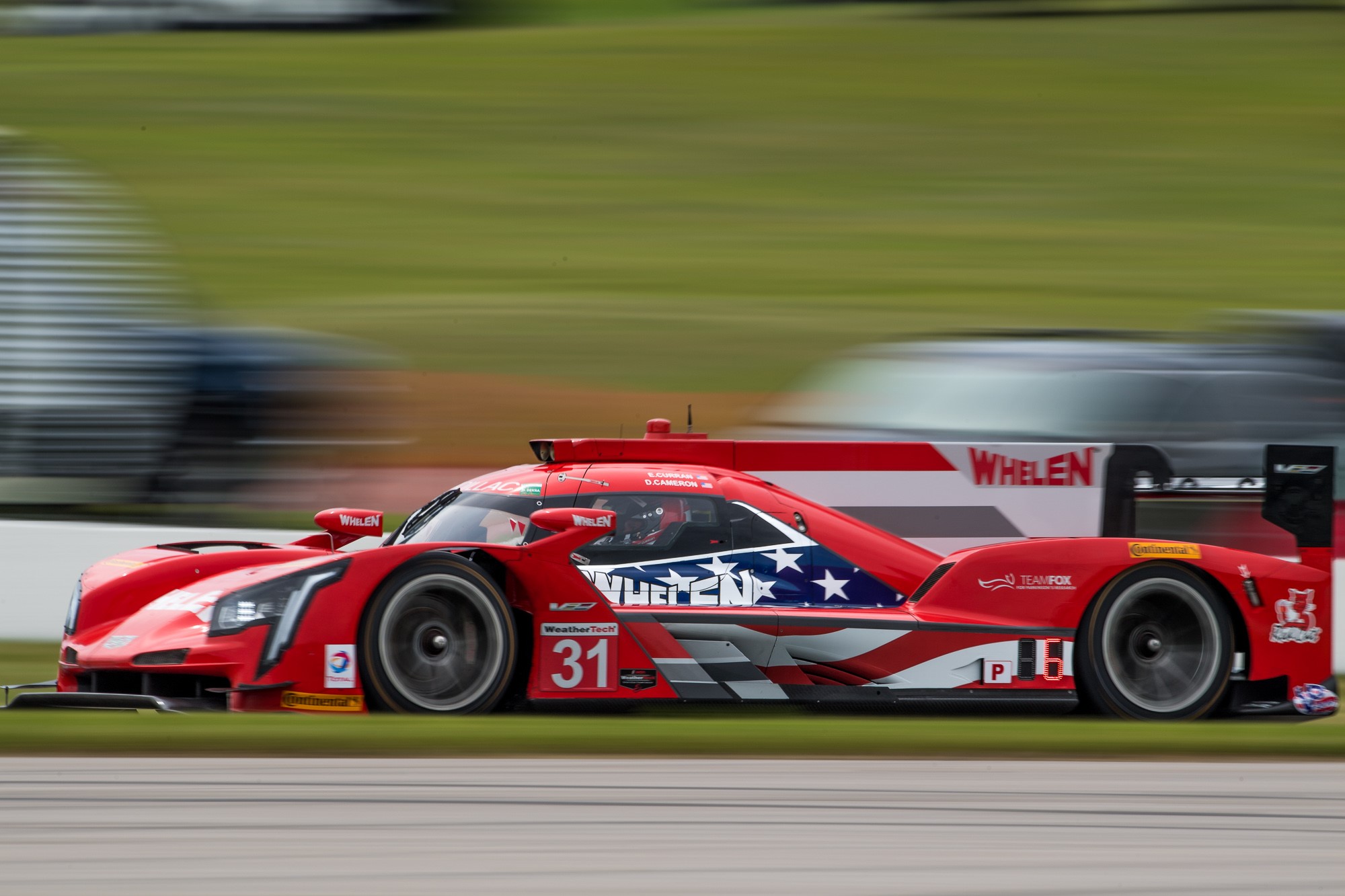 In a race that saw changing weather conditions and various pit strategies between teams opting for wet weather or “slick" dry-weather tires, Cameron had to hold off a hard-charging Stephen Simpson in the rain over the final minutes to score his first win of the season for the No. 31 Whelen Engineering Racing Cadillac DPi-V.R team and co-driver Eric Curran.

It was Cadillac’s seventh win of the season, with each of the marque’s three teams now having won a race in the debut WeatherTech Championship campaign for the Cadillac DPi-V.R.

“You can have all the speed in the world, but execution wins it," said Curran. “It just kind of handed it back in our favor when it came down to who had slicks and who didn’t. We just keep doing a good job, and it shows on the Action Express side why we’re three championships in. It’s shear execution."

Weather was a factor throughout the final hour of the event. A sudden downpour while under caution with 48 minutes remaining forced the Prototype leaders to pit road. Of the seven cars on the lead lap, only the points-leading No. 10 Konica Minolta Cadillac DPi-V.R opted to remain on slick tires.

The move appeared to pay off when, despite dropping from second to fourth immediately following the restart due to the damp track, Jordan Taylor made up ground as the circuit continued to dry out, and ultimately took the lead when each of the teams that took rain tires hit pit road with 30 minutes left.

Taylor looked like he was going to cruise to his sixth win in seven races alongside co-driver Ricky Taylor, but was involved in an incident with the Chevrolet Corvette C7.R of Tommy Milner with 21 minutes left in the race. Taylor remained on the track throughout the ensuing caution, but gave way to Cameron immediately on the restart with 10 minutes to go.

Cameron was in the process of holding off a late charge from Simpson when David Ostella flipped in the No. 52 PR1/Mathiasen Motorsports Ligier with just a handful of minutes remaining, forcing the race to end under caution. Ostella was evaluated and released from the infield care center following the incident.

[adinserter name="GOOGLE AD"]“I knew the (No.) 85 was strong all weekend," said Cameron. “I knew they had some pace on us. We probably weren’t the happiest we’d been with our car, but we had good track position. Then the rain came back a bit, and I was either going to win or go off trying to win."

It was the second consecutive runner-up finish for Simpson, co-driver and Toronto resident Misha Goikhberg and the No. 85 JDC-Miller Motorsports ORECA LM P2 team. The No. 2 Tequila PatrÃ³n Nissan DPi of Scott Sharp and Ryan Dalziel rounded out the Prototype podium while Mazda Motorsports made up the remainder of the top five with its No. 55 and No. 70 Mazda DPis finishing fourth and fifth, respectively.

Complete race results are available at results.imsa.com. The next WeatherTech Championship round for the Prototype class is the Continental Tire Road Race Showcase at Road America on Sunday, Aug. 6.

Performance Tech Motorsports is now three wins away from a perfect season in the Prototype Challenge (PC) class with James French and Pato O’Ward scoring the sixth consecutive win for the No. 38 ORECA FLM09.

It was an eventful win for the team coming back from one lap down to win the Mobil 1 SportsCar Grand Prix at Canadian Tire Motorsport Park. Leading for much of the early part of the event, O’Ward hit a piece of debris with 54 minutes remaining and had to pit to replace the nose of the car. The team lost a lap in the process, but raced back to the lead lap and took the lead for good with 36 minutes to go.

“I drove straight through it, broke the splitter and the nose," said O’Ward. “When we changed it, we got out in second and it started raining. We came in to do a splash of fuel, and they asked what I wanted. I said I want to risk it and kept the slicks. That’s why we were able to overtake and get into first."

Each of the BAR1 Motorsports entries led a lap during the race. Garett Grist got around pole-winner French at the start of the race to lead the opening lap in the team’s No. 26 ORECA FLM09, while Ryan Lewis led multiple laps when O’Ward had to pit from the lead to make repairs to the nose of the No. 38. Lewis and co-driver Don Yount finished in the runner-up position.

“I was talking to Garett before the race and he said he’d pass me on the outside going into one, which is funny because he did it," said French. “We had a bit of contact, and I might have damaged the steering a bit because the wheel got a little heavy. So that was mostly my day, trying to carry a heavy wheel. The car was super quick, and had lots of grip, it was really fun to drive."

For BMW Team RLL, when it rains it pours – both literally and figuratively as it turns out, in Sunday’s Mobil 1 SportsCar Grand Prix.

Auberlen started the race from second on the class grid but got past polesitter Dirk Werner’s No. 911 Porsche on the opening lap and quickly jumped out into the lead ahead of his teammate Martin Tomczyk in the No. 24 BMW. Auberlen held the lead throughout his 46-minute opening stint before turning the car over to Sims.

The 29-year-old native of London, England briefly trailed the pair of Corvette Racing entries, which were on a slightly different pit strategy, but eventually regained the lead. He had his hands full with changing weather conditions – the skies opened up two different times over the final hour of the race – as well as a charging Patrick Pilet in the No. 911 machine and his own teammate, John Edwards in the No. 24.

He found his way past Edwards and back into the lead with 35 minutes remaining, and then kept Pilet at bay for the next 25 minutes before Pilet retired with a mechanical failure. Sims then managed to hold off Edwards in the race that finished under full-course caution.

“Bill gives me a lot of praise, but it was still pretty sketchy in the first stint of my race, but I was still learning the car on full tanks and new tires. It’s a bit of a different animal. It’s not as easy as it looks from the outside. Then the rain came and spiced things up a bit more.

“We had a bit of a problem on the pit stop and dropped us back to third. And then coming back on slicks passing the Porsche and the other BMW, we took some risks but kept it on the black stuff and were able to take things home."

It was Auberlen’s 57th career victory in major North American sports car competition, moving him to within three of leader Scott Pruett on the all-time list. It was BMW’s first 1-2 sweep in GTLM since the 2015 WeatherTech Championship race at Mazda Raceway Laguna Seca and was the first sweep of the top-two spots for any GTLM team since the Porsche GT Team went 1-2 at Circuit of The Americas last September.

Edwards and Tomczyk were second in GTLM and No. 67 Ford Chip Ganassi Racing Ford GT co-drivers Ryan Briscoe and Richard Westbrook rounded out the podium with a third-place run. Briscoe and Westbrook won the GTLM race last year at Canadian Tire Motorsport Park.

A scary incident involving Jordan Taylor in the overall race-leading No. 10 Cadillac DPi and Tommy Milner in the No. 4 Corvette Racing Chevrolet Corvette C7.R in Turn 4 brought out the second of the race’s three full-course cautions with slightly more than 20 minutes remaining. Milner crashed heavily into the tire barrier but was not injured.

The GTLM class headlines the next WeatherTech Championship round, joining the GT Daytona class for a two-hour and 40-minute race at Lime Rock Park in Lakeville, Connecticut on Saturday, July 22.

Less than 24 hours later, a new set of Stevenson drivers – Andrew Davis and Lawson Aschenbach – and a different car, the No. 57 Audi R8 LMS GT3, pulled into victory lane after a two-hour and 40-minute battle at Canadian Tire Motorsport Park.

Davis qualified the car second on the class grid and slotted in behind TOTAL Pole Award winner Sage Karam in the No. 14 3GT Racing Lexus RCF GT3 for the entirety of his stint before pitting 47 minutes into the race to hand over the controls to Aschenbach.

A key moment in the GTD race came when Karam pitted from the class lead to turn the car over to co-driver Scott Pruett. The No. 14 team incurred two drive-through penalties – one for spinning the wheels while the car was up on its jacks and a second for leaving the pits with equipment attached – dropping the car out of contention for the victory.

Aschenbach eventually cycled back into the lead in the No. 57 as the pit-stop sequence played out for the rest of the class, then briefly surrendered the lead again when he made his second and final pit stop. He regained the lead with 54 minutes remaining and overcame the challenging weather conditions to take the victory.

“It was very tricky conditions, especially on the restart with the rain," Aschenbach said. “After knowing we had a good car, it’s very difficult to gauge what will happen in the rain because the tires cool down a bit during cautions and you don’t know what it’s going to be like on the track until after going through it at full speed. We knew we needed green flag pit stops with a bit of a gap because our fueling takes a little more than everybody else.

“Getting gaps was really important. We had a big lead and I was a little bit too conservative with some lappers, but there was no need to make a big move. I came out behind a bunch of guys trying to stay on the lead lap so dealing with them was something I wanted to stay away from. I didn’t see a need to take a risk. I’m so happy with the win, it’s my first win with Stephenson Motorsports."

It was the first WeatherTech Championship victory for both Aschenbach and Davis and the first win for Audi since the race at Lime Rock Park last July. It was Aschenbach’s third win in major North American sports car competition with one previous victory each in GRAND-AM and the American Le Mans Series, and the 10th win for Davis, joining nine previous GRAND-AM wins.

It was the third consecutive race that two women – Nielsen and Legge – finished on the podium.