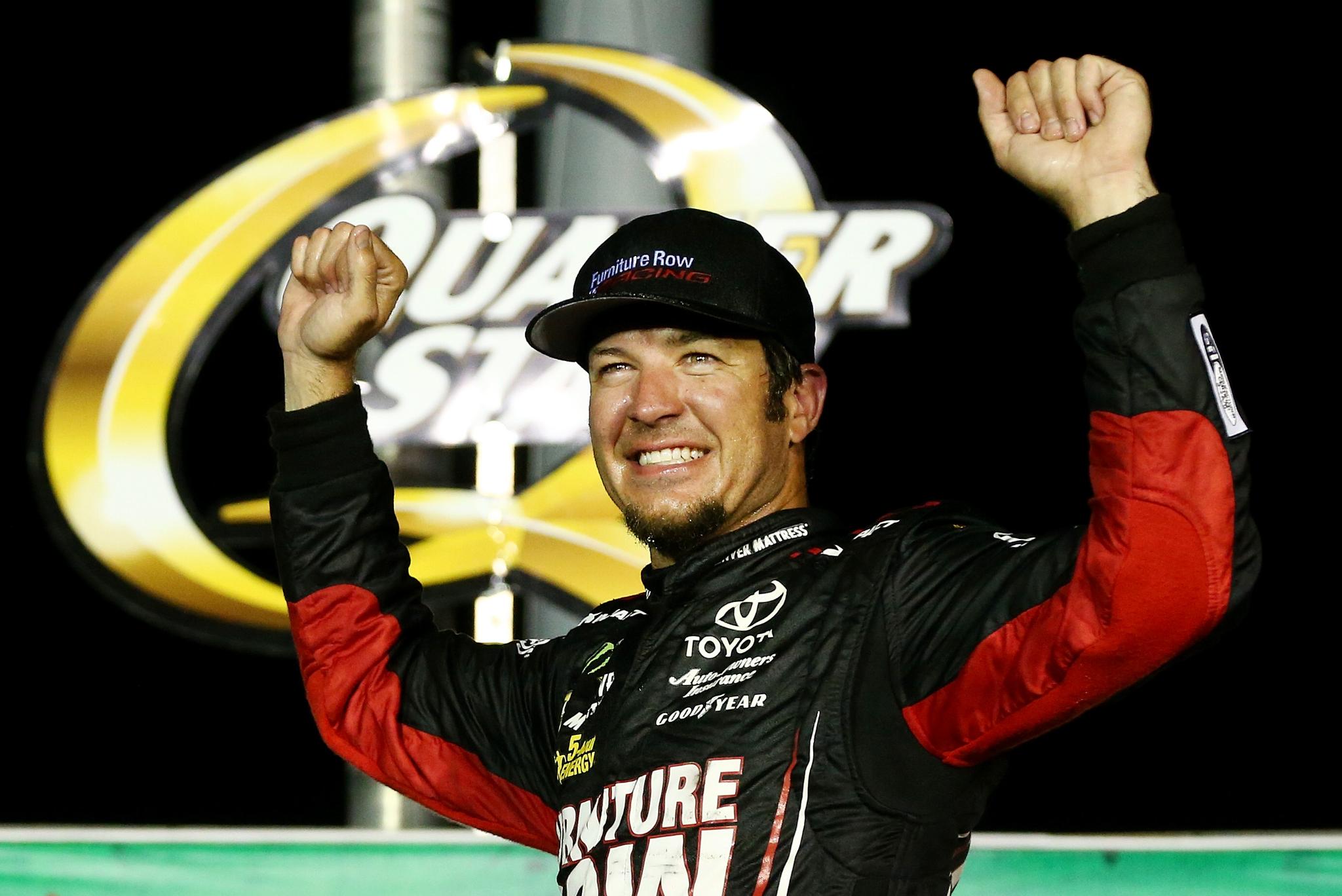 After all was said and done, the dominant car won the race – but not without extreme complications.

With just over a lap to go in Saturday night's Quaker State 400 at Kentucky Speedway, Martin Truex Jr. held a lead of more than 15 seconds over second-place Kyle Larson, with only eight cars remaining on the lead lap.

But before Truex could take the white flag signaling the final lap, the engine in Kurt Busch's Ford expired, dumping oil on the 1.5-mile track. Under the caution, only Truex stayed out, with all other lead-lap cars coming to pit road for fresh tires.

On old rubber and with a hard shove from Larson, who lined up behind him in the outside lane, Truex surged past Kyle Busch through the first two corners and held the lead until a wreck behind him at the end of the first overtime lap caused the ninth caution of the night and froze the field with Truex in the lead.

The victory completed a perfect night for Truex, who won the first and second stages and then took the checkered flag. The win was Truex's third of the season, his first at Kentucky and the 10th of his career. Truex increased his series-leading playoff point total to 28, 12 more than that of second-place Jimmie Johnson.

"It's just… this is completely unbelievable," said Truex, who is tied with Johnson for the series lead in victories this season. "I'm so excited to win here. It felt like we had a shot last year and it got away from us on fuel mileage and just wanted to win here so, so bad after that. This is sweet redemption."

Before Kurt Busch's engine blew, the green-flag run after the second stage had extended to 100 laps, and the final minutes of the race had only increased Truex's anxiety, despite his colossal lead.

"Worried every lap, waiting for a caution," Truex said. "Especially at the end. You're counting them down – you know 30, the last 30, the last 20, the last 10 and then you get inside of five, and you're like ‘Oh my god, there's no way there's not going to be a caution, and sure enough there was.

"Fortunately (I was) able to hold them off. This thing was just so stout tonight. A good push from Larson (on the final restart) helped us a bunch."

Larson started the race in 40th because his car failed to pass inspection before qualifying. In the first 80-lap stage, he charged forward to the third position but sped on pit road during caution between stages and restarted at the rear of the field on Lap 88.

Again he charged through the field, and when the cars lined up for the final restart in overtime, Larson took advantage of four new tires to grab second place. Even on new rubber, he had nothing for Truex, who led a race-high 152 laps.

"Yeah, I don't know what we could have done to beat him," said Larson, who retained a one-point lead over Truex in the championship standings. "He was obviously pretty fast with the lead there. It would have been fun to get to race him because I felt like I had the second-best car today; and it would have been interesting to get a restart with him earlier and get to hang with him that last run there.

"But we brought the Target Chevy home second after not being able to qualify and having to start last in the race and then having my speeding penalty there. I guess I was just a little too fast leaving my stall and got a penalty. So I've got to clean that stuff up. I'm mad at myself that I made that mistake. I don't really know if it affected the outcome, but you never know."

For Johnson, the jinx continued at Kentucky, one of three active tracks at which the seven-time champion hasn't won (the others being Watkins Glen and Chicagoland). On Lap 88, after the start of the second stage, Brad Keselowski's No. 2 Ford got loose on the entry to Turn 3 and collected Clint Bowyer's No. 14 Ford. Johnson couldn't avoid the wreck in front of him.

"The car felt great," Johnson said. "I feel like we were probably in the position for a good top five tonight, with all things considered. But, the No. 2 car (Keselowski) got into the corner and he was sideways before we got there. I feel like the car on the outside of him (Bowyer) left him some room.

"But then, talking to Brad inside (the infield care center), he said he was just sideways before he ever got to the corner. And I thought I almost had him missed. I really thought I had him missed, and I just clipped him with my right front. It broke something in the suspension and took me into the fence."

Keselowski confirmed the diagnosis after both cars had retired from the race, Keselowski in 38th and Johnson in 39th.

"I just wrecked it," Keselowski said. "It stinks. I got loose into (Turn) 3. I was underneath the 14 (Bowyer). I was trying to lay up and give room but just spun out as soon as I got anywhere near the corner.

"I wrecked myself and a bunch of other guys. It's part of it I guess, but not a part that you have to like."