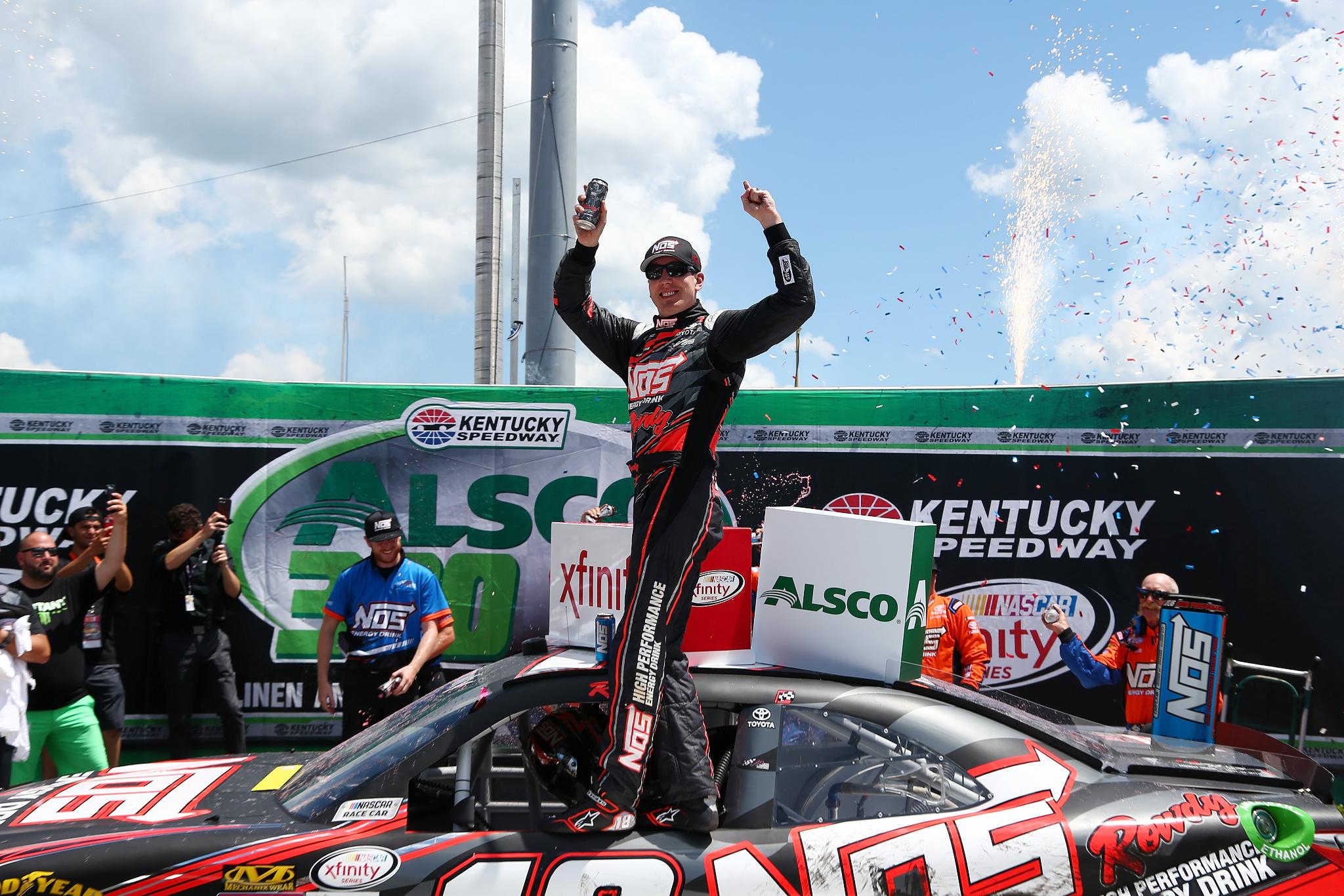 As Kyle Busch spun his No. 18 Toyota wildly during his celebratory burnout at Kentucky Speedway, the right rear tire exploded with an audible pop after it hit the drain below the apron.

In effect, Phillips was the architect of Busch's second victory this season, his fourth at Kentucky and the 88th of his career, extending his own series record. Busch, the pole winner, was leading on Lap 129, when the engine in Joey Gase's No. 52 Chevrolet blew up in Turn 3, dumping fluid on the track to necessitate the seventh caution of the afternoon.

That's when Phillips, thinking several moves ahead, opted for four tires. Busch lost six positions to teams that opted for two-tire stops, but by Lap 148 he had passed Joey Logano, who had two runs on his left-side tires, for the third position.

The four-tire call enabled Busch to stay on the track and inherit the lead when Ray Black Jr.'s crash in Turn 2 brought out the eighth and final caution on Lap 167. Busch remained out front the rest of the way and got some help when Ryan Blaney, whose No. 12 Ford was arguably the fastest car in the race, was penalized for a runaway tire during his final pit stop on Lap 168.

[adinserter name="GOOGLE AD"] "These guys keep getting better, and we just bide our time a little bit as we did today," Busch said. "We did what we needed to do to be there at the end and gave it our best opportunity there. We took four tires and that kind of got us behind there with two pit stops to go.

"And then some of those guys came in again. Obviously, our car was really fast out front, and once I got in clean air, I didn't think anybody had anything for us."

Blaney restarted at the back of the field and charged to second place, passing third-place finisher Erik Jones for the runner-up spot on the final lap. But Blaney ran out of time where the win was concerned and crossed the finish line 1.097 seconds behind Busch, who won from the pole for the 35th time.

"We got it really good at the end," Blaney said ruefully. "We were good all day. I thought we were the best car all day, personally. Before that last caution. I thought we were going to get by the 20 (Jones) and set sail. The caution came out and we were debating on whether to pit or not.

"It's easy to look back on it now and say that we should have stayed out and seen what happened. I thought the right call was to pit, and we just had a violation. That stings. It almost stings worse running all the way up there and finishing second than if we would have finished 10th or something."

There was no shortage of action from the outset of Saturday's race. As the cars reached the start/finish line for the initial green flag, the field bunched up, and the cars of Brendan Gaughan, Black Koch, Brandon Jones, Ryan Reed and Michael Annett were damaged in the resulting melee.

Jones fell out immediately, Gaughan was eliminated by a subsequent accident on Lap 7, and Reed dropped out after 55 laps because of overheating. Annett and Koch were able to continue and finished 16th and 23rd, respectively, but those opening moments set the tone for wild restarts that would follow.

Series leader Elliott Sadler ran 12th and maintained a 45-point edge over second-place Byron, who fell short in his attempt to win a third straight race.