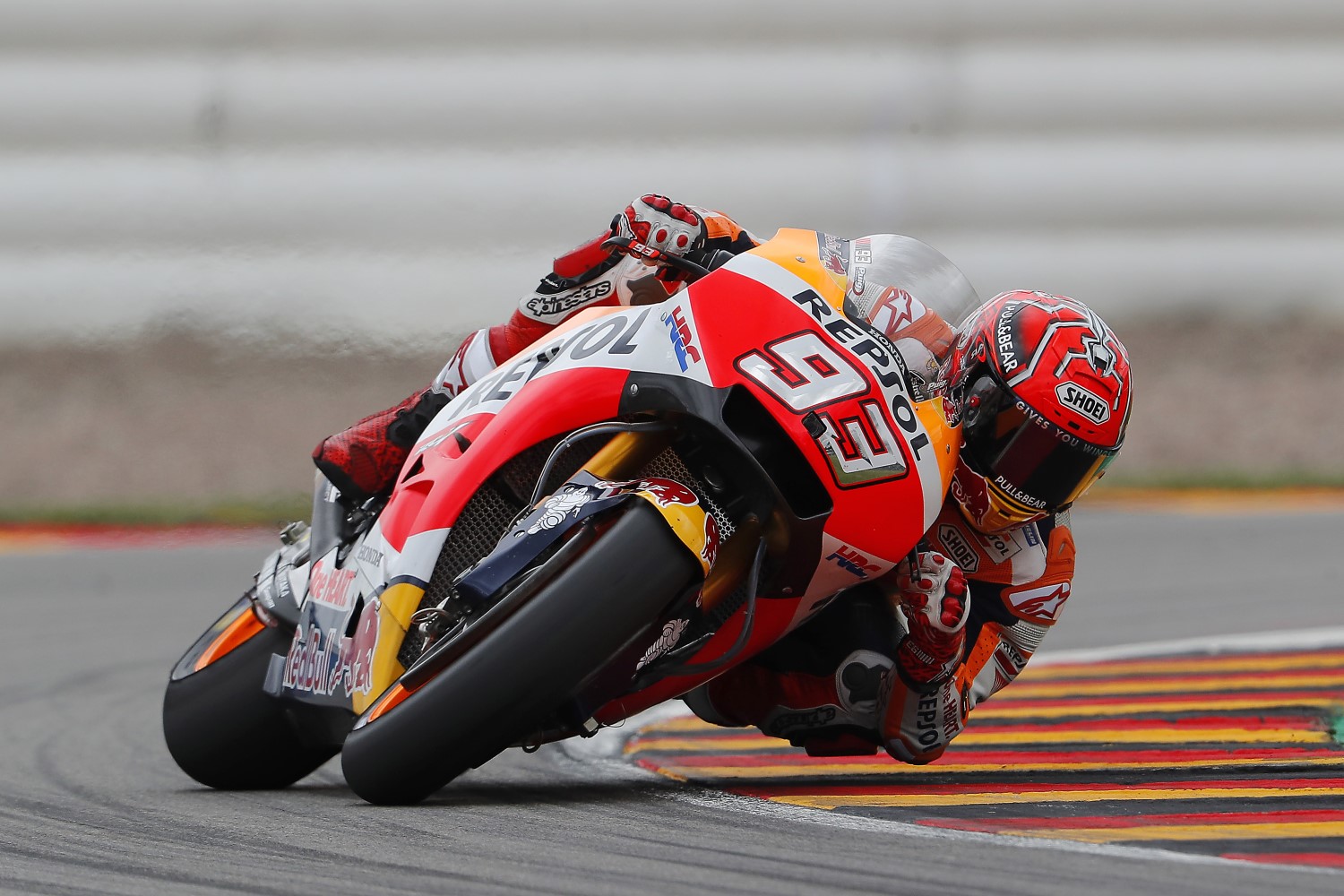 Marc Marquez is simply unbeatable at the Sachsenring. It does not matter if it rains or it is dry, the Repsol Honda rider wins from pole every year.

Marquez took an incredible eighth win in a row at the 'Sachsenring', extending his run from the 125 World Championship to another year of the premier class – with all those wins from pole. It was anything but easy, however – with German rookie Jonas Folger (Monster Yamaha Tech 3) pushing the reigning Champion on home turf throughout the race in a stunning ride to his first podium. Dani Pedrosa (Repsol Honda Team) completed the podium to get back in contention following a more difficult Dutch GP.

Marquez took the lead into Turn 1 from pole, with teammate Dani Pedrosa slotting into second as Jorge Lorenzo (Ducati Team) sliced through from P6 on the grid to third, pushing Danilo Petrucci (Octo Pramac Racing) and Jonas Folger back. The Repsol Hondas began to pull away in the lead as Folger charged through to get himself into third – and then started threatening the two men ahead of him. Choosing his moment, the German rookie then took Pedrosa and prepared to attack Marquez – pushing through soon after and below lap record pace.

Further back Petrucci was through on Lorenzo into fourth, and it was the 'Doctor' Valentino Rossi (Movistar Yamaha MotoGP) who struck next, with the number 46, Andrea Dovizioso and Petrucci then battling for P4 as Pedrosa began to drop back from the lead duo. Folger then headed wide and Marquez took the opportunity, but couldn't shake the German.

That's the way it stayed – with Marquez' pitboard remaining +0.1 lap after lap, and the rookie not for giving up. Facing down the reigning Champion – chasing his eighth consecutive win at the track – Folger kept calm under incredible pressure, and even created some himself for the number 93. Finally it was a small mistake that saw Folger run deep, and Marquez pulled the pin to stretch the gap – eventually crossing the line for win number eight just over three seconds clear.

[adinserter name="GOOGLE AD"]Folger kept it safe in the final laps to cross the line in second for his first premier class podium, sealing the deal on an incredible performance at his home race. Dani Pedrosa completed the podium after a more lonely ride in the latter stages, also bouncing back from a tough Dutch GP.

As the top ten battled it out further, Rossi had found his fourth under attack from Dovizioso, with Vinales then joining the fight and Alvaro Bautista (Pull&Bear Aspar Team) soon on the scene. After some stunning wheel-to-wheel action, it was Vinales who took P4, with teammate Rossi for close company to complete the top five. Bautista took P6 after proving a formidable force in the fight, with Aleix Espargaro (Aprilia Racing Team Gresini) crossing the line in seventh for a good haul of points for the Noale factory ahead of the summer break.

Championship leader going into the race, Dovizioso crossed the line in P9 and remains third in the standings – ahead of a stunning comeback from Johann Zarco (Monster Yamaha Tech 3) to move through from P19 on the grid. Cal Crutchlow (LCR Honda) completed the top ten, with Jorge Lorenzo crossing the line in P11 after running at the front earlier in the race.

The summer break now awaits, with MotoGP next on track at the beginning on August. And the Championship? The reigning Champion has one hand back on the throne after his German GP win, now five points clear of key rival Vinales. Dovizioso is now third – one point behind Vinales as the upcoming Brno and Red Bull Ring shine with promise for Ducati. Rossi lurks in fourth, only another four points off, with Pedrosa still very much in the fight in fifth.

Marc Marquez #93 1ST
I’m very, very happy. I knew before the weekend that this was an important moment in the Championship and that the Sachsenring was an important circuit for us. It was the place to take a risk if necessary and to try to win. So I’m happy we took these 25 points and the lead in the Championship before the summer break. I wish to dedicate this win to Nicky (Hayden) and his family. I had promised this to myself after his incident because we had some very good moments together and he was a friend. The race was very tight. Honestly, before the start I thought I would have to battle with Dani, but actually there was also another very fast opponent. I was very surprised at the beginning to see Jonas there, and I thought he might stay in between with the other riders, but he actually remained there! He was quite a tough opponent! The Championship is very close with four riders within 10 points and with Dani also not far away. Everything is open, so we’ll keep the same mentality, the same positivity and hard work. Now we have a few days of holidays, but not too much to be ready for Brno test!

Dani Pedrosa #26 3RD
I’m happy enough with this podium. We worked very well this weekend, trying to manage every situation. In the race I felt really strong in the first laps and was able to stay close to Marc. Then I started to lose grip in the rear tyre, but I thought ‘Okay, no problem; it’s going to be a long race and it’s normal to lose some grip.’ But when Jonas passed me, I tried to follow and I couldn’t keep contact. I tried to manage but when I felt the tyre was spinning too much I settled for a podium. I expected to be a little bit stronger but all in all it was a positive result, as we gathered some good points for the Championship. I feel positive, we have two days to test during the summer, and we’ll work on the areas we know we must improve, especially to make the tyres work well no matter the conditions in order to be more consistent in the second part of the Championship.