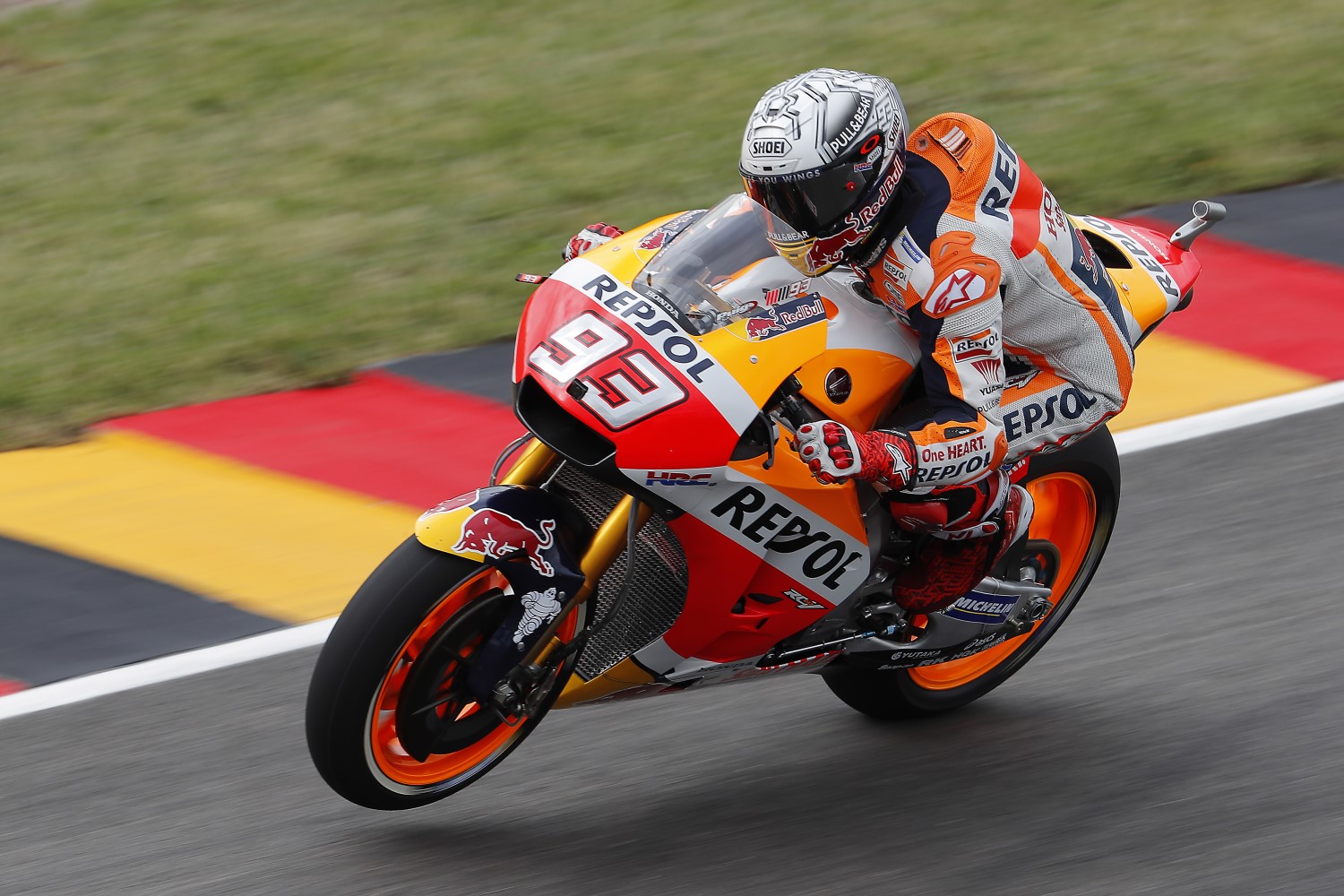 Marc Marquez today extended a remarkable run of pole positions at the Sachsenring circuit to eight from the last eight seasons, the Spaniard clocking the fastest time in qualifying this afternoon to secure top spot on the grid for tomorrow's race. Marquez was the only rider able to dislodge Danilo Petrucci from a provisional pole position that the Italian held for most of the session, with a time of 1'27.302 proving enough to complete the job. Dani Pedrosa was six tenths off his team-mate on pole but completes the front row in third position.

In a late rush for pole as the sun began to peek out, Cal Crutchlow (LCR Honda) was a key protagonist in the session and will start fourth, ahead of home hero and rookie Jonas Folger (Monster Yamaha Tech 3). Jorge Lorenzo (Ducati Team) completes the second row, putting in a solid performance as he gets to grips with the Desmosedici in the rain.

Championship leader Andrea Dovizioso (Ducati Team) was another of those to have a slightly more difficult session to take tenth, but starts ahead of key rival in the points standings Maverick Vinales (Movistar Yamaha MotoGP), who was eleventh fastest in the wet. Alvaro Bautista (Pull&Bear Aspar Team) completes the top twelve on the grid from Q2.

One big name further down the grid for the German GP is Johann Zarco (Monster Yamaha Tech 3) after a more difficult weekend for the French rookie superstar, with Zarco readying himself to line up in P19.

Marc Marquez
When I saw that it was going to be a wet qualifying session, I set a front-row position as my target. Anyway, I’ve felt very good on the bike since the beginning and I saw that the rain was easing off, so I tried to find a good rhythm as I prepared to attack in the final stages. Halfway into the session there was a bit of confusion with Maverick. In qualifying everyone pushes a lot and there was some contact, but luckily nothing happened. In the end I was able to do a very good lap and I’m quite happy with that, as it’s always very difficult to manage in the rain. Now we just need to focus on the race, which will be tough as there are many fast riders with a good pace, starting with my teammate! It seems that it won’t rain, but whatever conditions we find, it will be okay, as we have a really good pace both in the dry and in the wet.