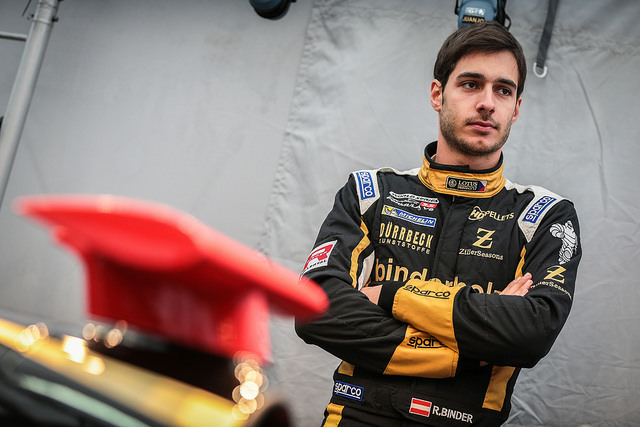 Eager to keep his sponsor money in Europe, no sooner did the IndyCar rumors surface and bang, all of a sudden Binder gets an F1 test.

Rene Binder, the Lotus driver in the World Series Formula V8 3.5 and one of the 2017 Title contenders will complete his first ever Formula One test in October. The Austrian driver, nephew of the F1 former driver, Hans Binder, has made the announcement today from the F1 paddock, where he’s enjoying the Austrian GP in his home soil.

Binder is fighting in the Series with Pietro Fittipaldi the grandson of Emerson Fittipaldi, and current leader. In the 70’s, both Binder and Fittipaldi competed in Formula One, and now, the young Austrian driver will carry on with the F1 link of the Binder Saga when he put his hands behind the wheel of the Renault F1 car in Paul Ricard. With another Title Contender in the World Series, Alfonso Celis, who has just completed the first Free Practice Session in the Austrian GP with the Sahara Force India F1 Team as a third driver, Binder rejoins Sebastian Vettel, Carlos Sainz (Champion, 2014), Daniel Ricciardo and Kevin Magnussen (Champion, 2013) in the World Series drivers experiencing a good taste of the pinnacle of motorsport.

1) Congratulations Rene! With you it makes 6 drivers in the 2017 F1 Season who made their first contact with a F1 car from the World Series! How do you feel?
"First of all I have to thank Renault Sport Racing for the great opportunity to test their V8-powered E20 F1 car, which is by the way the same car, that Robert Kubica, tested recently. It will be a great day in Paul Ricard with proactive, qualy and race simulations and I hope it will have a positive impact on my career."

2) Are you going to change your routines to prepare the test in Paul Ricard?
"Not at all. It is no secret that the World Series car is the perfect machinery to prepare for F1 so the only thing I will do is to listen carefully to my engineers instructions and get the job done."

3) This year looks like an extraordinary coincidence in your racing career, as the Binder/Fittipaldi duplet meets again in the same team, Lotus. In Formula One, your team mate is said to be your worst rival, because you compete with the same machinery, but you guys manage to keep an extraordinary atmosphere inside the garage, how is that?
"Pietro and his family are very nice people and he is definitely one of the quickest guys out there you can have as a team mate. However, after analyzing the first half of the season I still see a good chance for me in this championship fight against him and the other guys, given that there are not less than six drivers who can win it."

4) Some F1 top managers criticized Stoffel Vandoorne saying that he is in trouble because he has only raced in Junior Formulas with the same machinery…. Prior to the WS, your last wins were in the F3 days, what do you have to say to that?
"I completely disagree. Stoffel is a great driver, who scored a point in his first Grand Prix when he replaced Alonso. He is going through hard times but I am sure he will make his way."

The 25-year-old Austrian intends to take advantage of FV8 3.5 racing on the World Endurance Championship bill at Austin in September the day before the IndyCar finale at Sonoma to visit the American single-seater series.

"I will watch the race in Sonoma on the Sunday after our race," Binder told Autosport.

"We need to see what possibilities we have.

"I would be interested in doing something in IndyCar because I really like it – the street circuits and this kind of racing.

"Unfortunately we don't do street circuits in 3.5 which is a pity, so I'll look if there's something possible there."