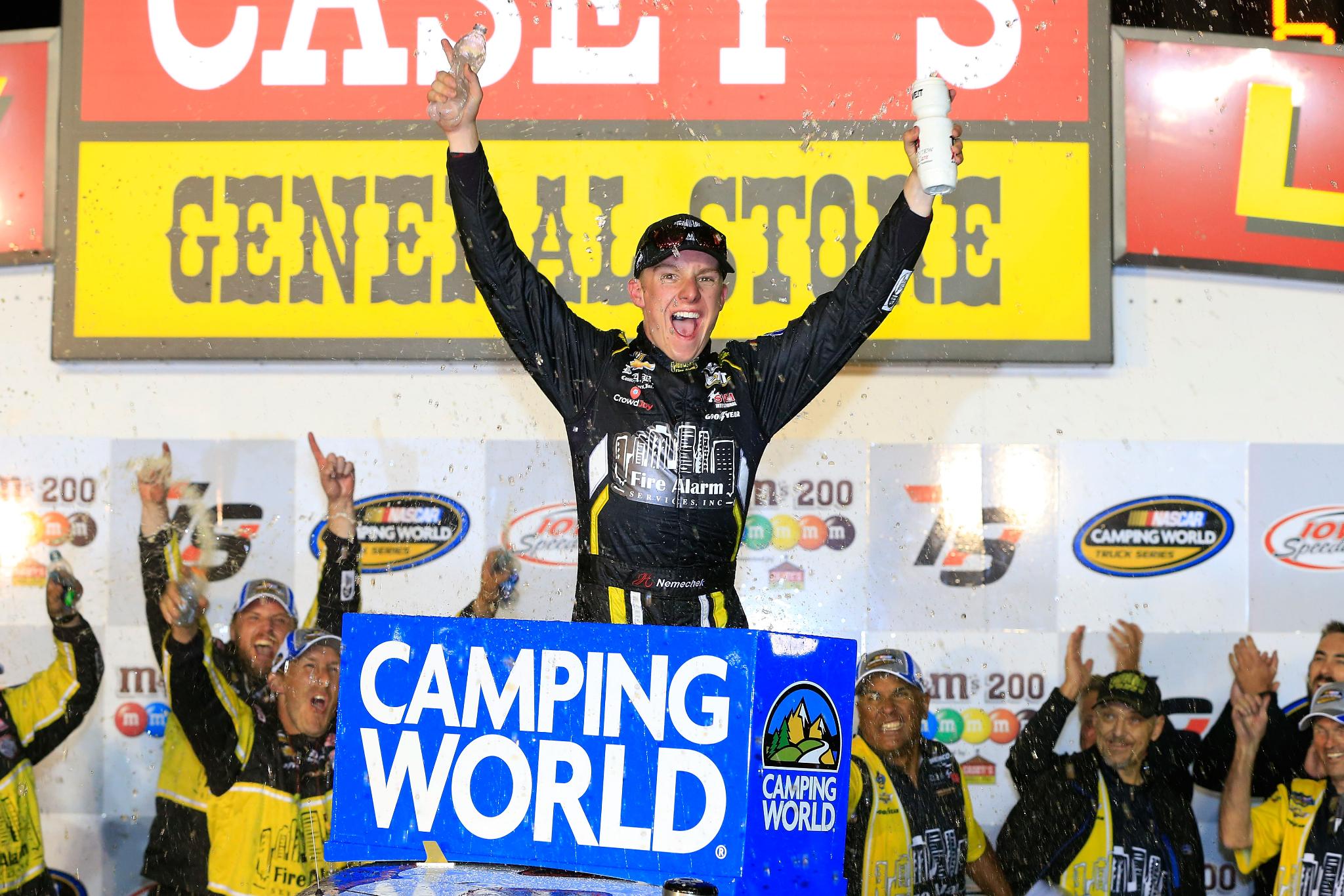 Nemechek pulled off a three-wide pass on race leaders Chase Briscoe and Johnny Sauter with five laps to go and held on to collect his second win of the season and the fifth of his career in the truck series.

Nemechek joins Kyle Busch as the only back-to-back winners so far this season on the truck series, and the first truck-series regular to pull off the feat since Sauter himself went back to back at Martinsville and Texas last season.

"The truck wasn't the greatest from the start of the race. The track kept changing a lot…somehow it all worked out in the end," said Nemechek, the son of veteran NASCAR driver Joe Nemechek. "The last strategy call, taking four tires instead of two, there at the end, we kind of had that strategy if a caution came out towards the end we were going to come no matter what, and no matter who came, just because tires were such a big factor.

''We knew that we were going to have a good truck here. All year we felt really good about this whole stretch: Gateway, Iowa and Kentucky. Hopefully we can go to Kentucky and make it three in a row."

Much like Nemechek's win last Saturday night at Gateway, Friday night's victory was all about tires.

The Kyle Busch Motorsports duo of Bell and Noah Gragson dominated the early stage of the race – combining to lead the opening 115 laps of the event with Bell winning the opening 60-lap segment over Gragson and Sauter.

Bell held the top spot to start the second 60-lap stage but Sauter turned on the jets in the final laps of the segment and passed Bell with four laps to go to win Stage Two over Briscoe and Nemechek.

With Sauter and Briscoe out front it became a battle of who had the better handling truck as Sauter made the high side work for him while Briscoe stuck to the bottom groove, finally getting around Sauter for the lead with 17 laps to go.

Four laps later, Thorsport teammates Matt Crafton and Enfinger tangled in turn three to bring out the fourth yellow flag of the night and tossed everyone's race strategy out the window.

Now, with a restart looming with just eight laps to go, the question for every crew chief running in the top 10 was do we pit tires?

The question was answered when Sauter opted to stay out while almost all of the lead lap trucks pitted, putting Sauter on point for the restart.

On the restart, Sauter nosed ahead slightly until Briscoe pulled even going down the back-straight while Nemechek rode the wall going four-wide with Bell, Gragson and Austin Cindric for third place before taking the position coming out of turn four.

Coming to the line with five laps to go, Sauter again tried to find some speed on the outside and tried to edge Briscoe as Nemechek dived from the outside down to the apron in turn one, taking Briscoe and Sauter three wide before clearing both of them as they entered the backstretch.

From there, Nemechek turned on the jets and opened up a 1.6-second lead as Sauter's worn-out tires were no match for Nemechek.

Even before the final restart, Sauter's crew chief Joe Shear, Jr. was already second-guessing himself, saying "I think I made a mistake" in not coming to pit road for tires.

Sauter agreed, although he still managed to rack up a second-straight top-three finish and hold onto the points lead by 42 points over Bell.

"I got taken to school by Chase Briscoe," Sauter said after the race. "I think tonight was a second-place finish regardless.

''In hindsight, we should have put tires on but we didn't. Not a whole lot of deliberating.''

Brandon Jones, who restarted eighth in the final eight-lap shootout, fought his way past Briscoe with three laps to go for his first top-five truck series finish of the season.

Briscoe fell all the way to seventh in the final running order but managed to pass Crafton for third in the truck series points standings. Ben Rhodes continues to hold fifth in the points.