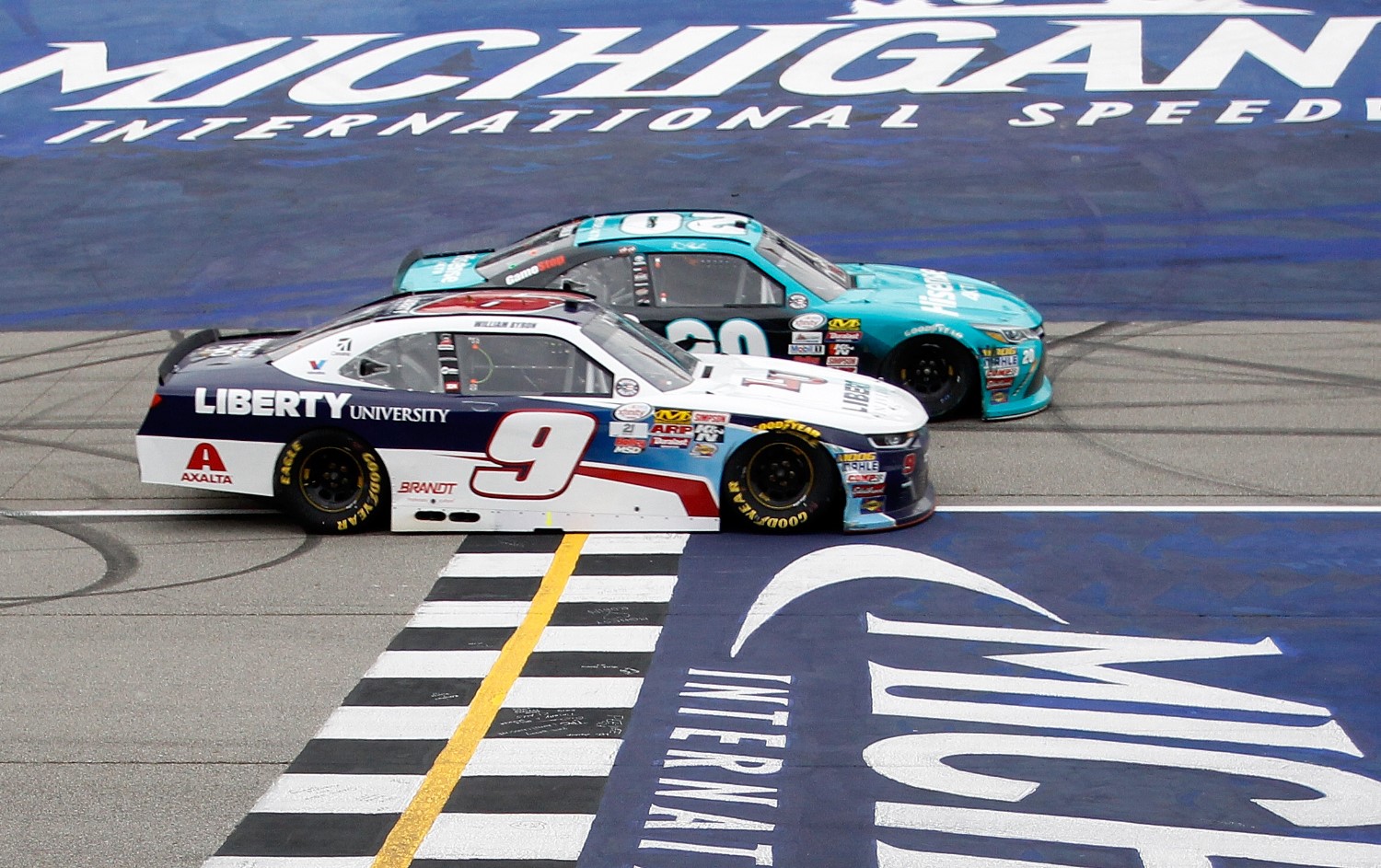 BROOKLYN, Mich. – Denny Hamlin used a pass coming off of turn four on the last lap to win the Irish Hills 250. He beat rookie William Byron to the line by just 0.012 seconds. It was the closest NASCAR XFINITY Series finish ever at Michigan International Speedway.

Matt Tifft spun off of turn four bringing out the seventh caution of the day with five laps left. It gave everybody one final chance to take a deep breath for an intense restart.

Byron led the field to the green flag with just two laps to go, but Denny Hamlin stayed right on his door the final two circuits. On the last lap, Hamlin got Byron a little loose and then it was just a drag race to the checkered flag.

Hamlin used side drafting to his advantage to slow the momentum of Byron. And that was just enough to win the Irish Hills 250.

“He (Byron) did a great job and really I knew he had a really good car," Hamlin said. “That last long run that we had, he was about to pass me, so he’s done a great job. Obviously, he’s one of NASCAR’s next future superstars and I wanted to race him clean. I wasn’t going to turn him around or anything like that, so I stayed low below him and got him a little bit loose through 1 and 2 that allowed me to get position and then into turn 3 we both got sideways, he slid up just enough to let me barely get to that left rear and it was just enough to drag race past him."

“We were so close," Byron said. “It really hurts to be that close and not win. He side drafted me off of turn four and that is the run he needed to the line and I just could not get enough back to him to get to the line fast enough. It hurts, but we will get one soon."

[adinserter name="GOOGLE AD"]The action started early and involved the front row. Kyle Busch won the pole with a qualifying speed of 193.564 mph earlier in the morning. He got a quick jump on the field, but before he got to turn one he had to fend off a challenge.

Brad Keselowski, starting from the inside of row one, got a run on Busch and quickly jumped to the outside. Busch slipped up the track and made contact with Keselowski’s front bumper. The slight contact sent Busch into a long slide, but he did not hit anything.

The first caution did not slow the aggression of the drivers. On the restart, they went four wide into turn one.

Stage two turned into strategy and Elliott Sadler was the big winner. Keselowski was leading until a three-car crash brought out a caution flag on lap 39. After pit stops, Cole Custer came out front. He led until Keselowski chased him down.

Just when it looked like Keselowski would win his second stage of the day, a caution flew on lap 58. Keselowski gave up the lead to pit, allowing Sadler to win the stage.

A late race caution bunched up the field. After a round of pit stops, Denny Hamlin led Keselowski out of the pits.

The Monster Energy NASCAR Cup Series held two practice sessions on Saturday in preparation for the FireKeepers Casino 400. Martin Truex Jr. led the day’s opening practice session with a speed of 198.385 mph. Jimmie Johnson suffered a spin in practice and will be forced to start the race from the back.

The FireKeepers Casino 400 starts at 3 p.m. on Sunday. Larson will lead the field to the green flag after winning the pole award. Tickets remain for the race.

Nestled in the lush Irish Hills of Southeastern Michigan, Michigan International Speedway is NASCAR’s fastest racetrack. It has been the love of NASCAR racing and the thrill of a great time for race fans and drivers alike for nearly 50 years.