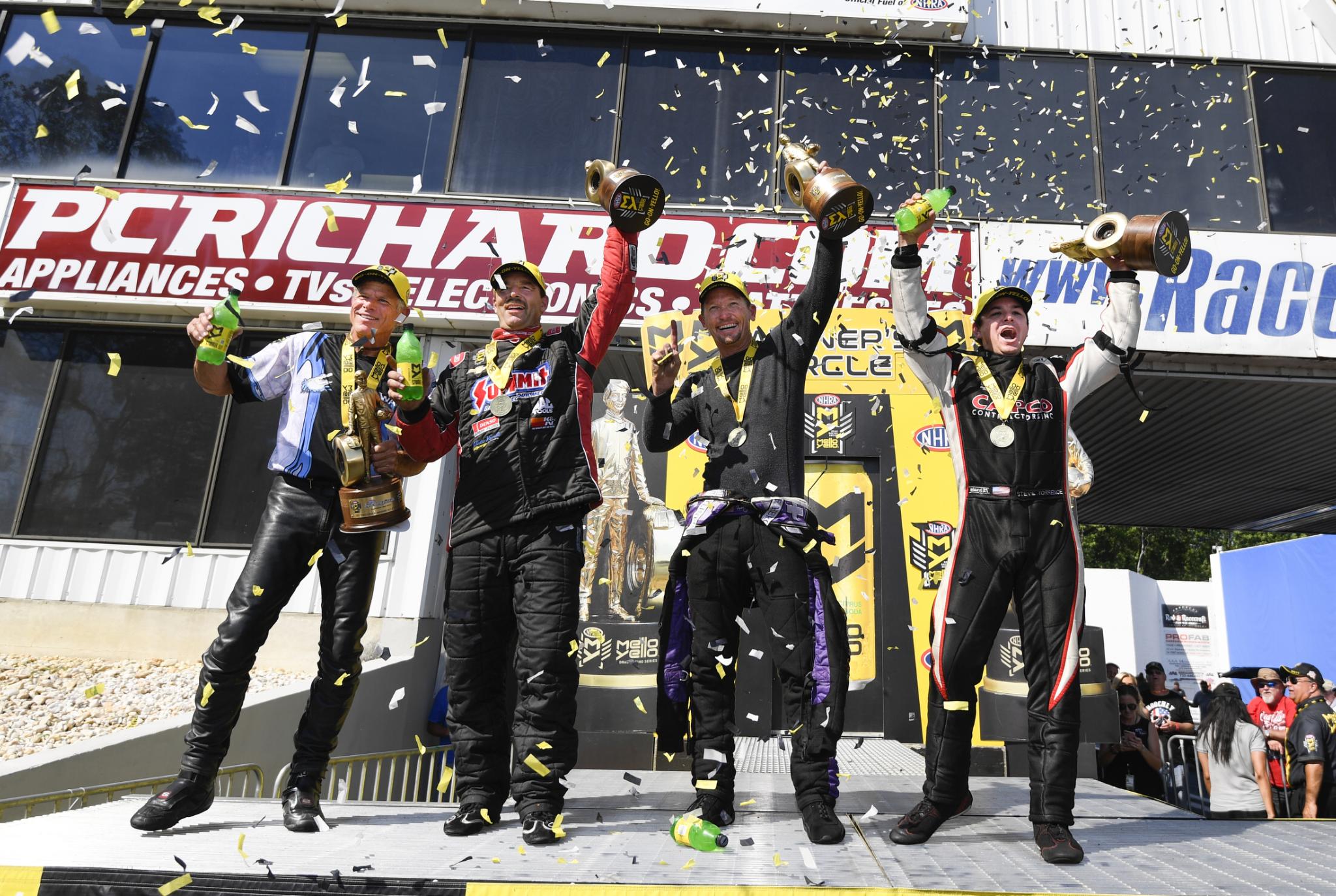 Torrence secured his third victory of the season with a 3.857-second pass at 320.28 mph in his Capco Contractors dragster to defeat Antron Brown who ran a 3.932 at 306.74 in his Matco Tools dragster in the final round.

He emerged victorious for the first time since winning back-to-back races in Charlotte and Atlanta, and has now reached the final round at five of the past six events. The win was only Torrence's second victory in 24 matchups against Brown in his career, and was his third career victory in Englishtown.

"All day long I was confident because we have historically done well in Englishtown, since I have won here twice and don't have that chip on my shoulder," Torrence said. "Both Antron [Brown] and I have cars that can win and we know we just have to do our jobs to win. I know my record against him isn't the best, but it's always fun to go up against one of my best friends in the final round."

Torrence qualified second and defeated Smax Smith, Clay Millican and Doug Kalitta on the way to victory. Brown qualified first and defeated Blake Alexander and Brittany Force before reaching his fifth final round of the year. Torrence now trails Brown by just seven points in the Top Fuel standings, while previous points leader Leah Pritchett fell to third with a first round exit in Englishtown.

"There have been quite a few variables for our team already this season, and we needed to get this win today so we knew that we could do this more often," Beckman said. "Not only is this our team's first win together, but a win at the Summernationals in Funny Car is about as cool as it gets."

Beckman qualified fourth and defeated Jim Campbell, Cruz Pedregon and Ron Capps before reaching his first final round of the season. Teammate and defending world champion Capps reached his sixth final round of the year after defeating Del Worsham, Alexis DeJoria and Robert Hight.

With the win, Beckman sits at third in the standings as the fifth different Funny Car winner of the season. Capps maintained his lead atop the Funny Car standings with the runner-up finish in Englishtown.

Anderson secured the victory in Pro Stock after driving to a 6.613 at 210.44 to knock off Vincent Nobile who ran a 6.665 at 210.21. Anderson now has two victories on the year as he notched his first win since Phoenix.

"It certainly was a tough weekend but everything worked out for us, but this Wally is going to my son for getting through high school," Anderson said. "This track has been magical for me, I have a lot of great memories here. To win eight times here makes it a pretty special place."

With the victory, Anderson now sits second in the points standings behind Bo Butner, who he defeated in the semifinals. Nobile sits seventh in the Pro Stock standings after his best finish of the year.

Defending Pro Stock Motorcycle Champion Jerry Savoie emerged victorious with a 6.918 at 192.85 to defeat Hector Arana Jr's pass of 6.862 at 195.62. Savoie notched his seventh career victory and first of the season.

"I've had some struggles earlier in the season, but each win is special because you never know which one will be your last," Savoie said. "This track has been good to me in the past and we were able to take this one home today and I'm extremely thankful for that."

With his first victory of the season, Savoie now sits third in the Pro Stock Motorcycle standings, becoming the third winner in four events in the category. Arana Jr. is sixth in the standings following his best finish of the season.