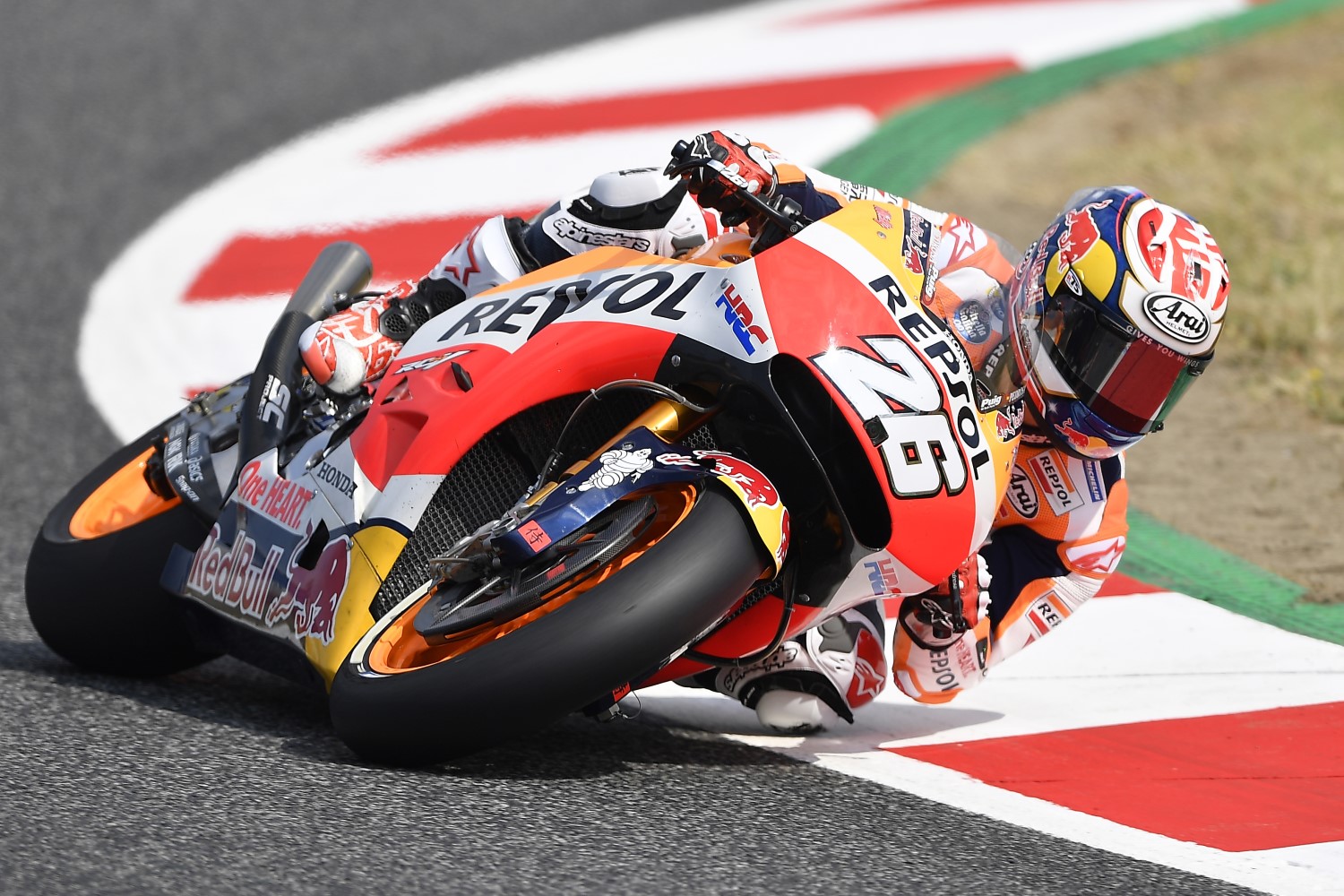 Dani Pedrosa (Repsol Honda Team) took a stunning pole position in the heat haze of the Catalan GP, storming clear of the field by three tenths to return to the top for the second time this year. Compatriot Jorge Lorenzo (Ducati Team) shot into second for his first front row start in red – after also proving second fastest on Friday – as two of the home heroes led the charge. Third was an incredible front row for Mugello podium finisher Danilo Petrucci (Octo Pramac Racing), as the Italian kept his momentum from a stunning home race last time out.

Marc Marquez (Repsol Honda Team) was one of the key headline makers, as the reigning Champion will head the second row but suffered a spate of crashes on Saturday. His final fall in Q2 took him out of contention for pole, with Marquez looking to wipe the slate clean overnight before trying to hunt down the win.

The sun shone more on Aleix Espargaro (Aprilia Racing Team Gresini) in fifth as his impressive pace from the morning continued into Q2, with another home hero just behind him in seventh – Reale Avintia Racing’s Hector Barbera.

The headlines were also thick and fast in Q1, as nine-time World Champion Valentino Rossi (Movistar Yamaha MotoGP) missed the cut only marginally to start P13, ahead of rookie sensation Johann Zarco (Monster Yamaha Tech 3). Cal Crutchlow (LCR Honda) lines up P17 and was another crasher.

The Catalan GP has already shown a fair share of drama, and the lights haven’t even gone out for the race yet. See how the story concludes on Sunday at 14:00 (GMT +2).

Dani Pedrosa 26 POLE POSITION 1'43.870
“I’m very happy because taking pole is always very difficult, and doing it in front of your home fans is just amazing. Last year we struggled a lot in qualifying, while this season we’ve already earned two poles, so I wish to thank my team for the good work. We’ve worked really hard on this aspect, and we’re getting better and better. The conditions were quite difficult today, especially for the tyres as it was very hot and the grip wasn’t the best. We tried to manage the situation as well as possible, working a lot on the setup to improve tyre life. The tyres will be the key to the race tomorrow; it’d be great to have the same feeling from today, but we’ll wait and see. We’ll just remain focused and be prepared to do our best."

Marc Marquez 93 4TH 1'44.320
“Fourth on the grid, four crashes–today was a bit challenging for us, but in reality we’re not so bad. We started the day very well; I felt very comfortable in FP3, but then I crashed in FP4 and everything followed from that. We were able to prepare the bike for the qualifying session, but the feeling wasn’t exactly the same; when the temperature gets so high, the front tyre moves a lot. But I was at my home GP, so I just gave it my all and tried 100%. I crashed, but in the end we’ll start from fourth, which isn’t that bad. I think if I’m able to keep calm and ride more smoothly, we’ll be okay. I look forward to having a great race tomorrow, and to fighting for the podium."