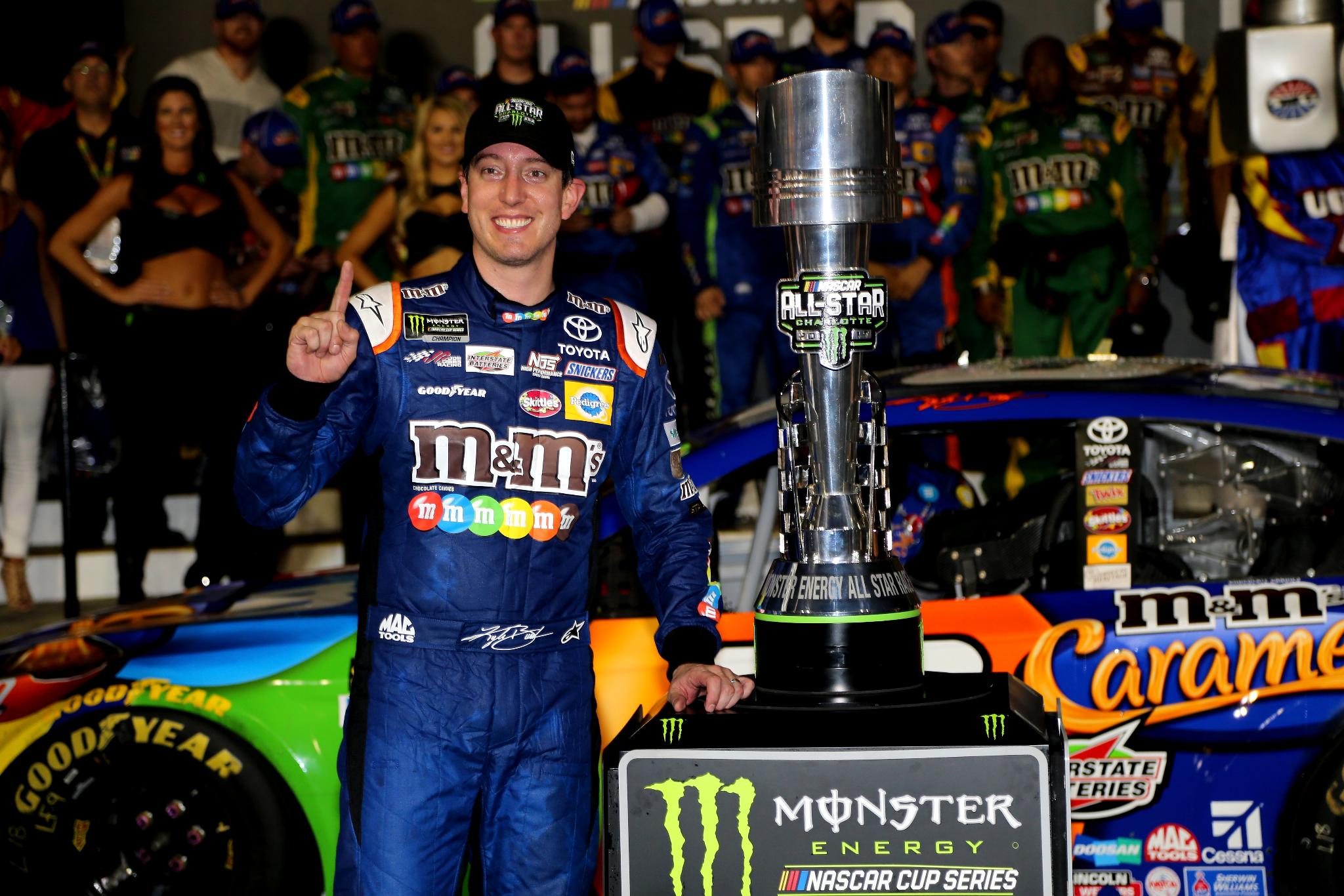 Busch led every lap of the final 10-lap shootout, taking the lead with a daring three-wide pass at the start of the segment and pulling away from Jimmie Johnson and Kyle Larson to finally win the race that has eluded him for 12 years.

Larson got past Johnson on the final lap to finish second. Johnson, Kurt Busch and Jamie McMurray rounded out the top five.

Although Kyle Busch has 15 career NASCAR victories at Charlotte, none of them had ever been in the Cup Series, and he finally got that elusive win in spectacular fashion and a million dollar payday.

"It means a lot, first of all to finally win at Charlotte for one, then to win the All-Star Race. It's an exciting race. This race was kind of born off of exciting events that were in the race, bold moves, things like that. We did one of those tonight to win the race,"said Busch. "Taking home a million bucks, that's not such a bad payday. I know Joe (Gibbs, team owner) gets to keep most of it (smiling). That is always good for the owner. But more importantly to get the team into Victory Lane finally. My guys have been here with me for a long, long time. I'm sure they feel the same goose egg that I do. It's extra special to finally get rid of that."

After winning the pole for the event, Larson proved to have the most dominant car in the early going, winning the opening two 20-lap stages.

Larson flew out to a 1.8-second lead on the opening segment, beating out Kyle Busch, Kevin Harvick, Johnson and Joey Logano.

Saturday night’s all star race featured a special soft-compound "option" tire that teams could utilize at any time during the 70-lap event. The tires were expected to give drivers an edge of as much as a half-second per lap.

Despite the hype surrounding the new option tires, many teams opted to use them early in the event, with Monster Energy Open stage winners Daniel Suarez and Ryan Blaney and fan vote winner Chase Elliott electing to start the race on the softer compounds.

For the second stage, Johnson was among those to switch to the option tires and restarted fourth with Larson up front and immediately jumped into a three-wide battle for second at the start, securing the spot before they completed the opening lap of the stage.

[adinserter name="GOOGLE AD"] With Larson out front, Johnson began to gain some ground on the softer tires but his lap times started to fall away in about 10 laps as the tires began to fade. By the end of the segment, Larson had opened up a 1.6-second advantage over Johnson, who finished second in the stage followed by Kyle Busch, Kurt Busch and McMurray.

For the third segment, Bowyer and Blaney exploited a loophole in the rules about the tires and changed just two tires, keeping the right-side "option" tires, and restarted in the front row ahead of Larson, Johnson and Kyle Busch.

Even more confusing was Brad Keselowski’s strategy after his team switch to the soft-compound tires during the pit stop, then changed their mind and switch to the regular tires before the restart.

Bowyer’s gamble proved to be costly, as he dropped like a brick on the restart as Johnson come around Blaney on the outside to take over the top spot. Harvick, meanwhile, moved into second spot after a side-by-side battle with his teammate Kurt Busch.

Despite losing some ground to Harvick in the closing laps, Johnson prevailed to win the third stage over Harvick, Larson, Kurt Busch and McMurray.

The lineup for the final stage was made up of the stage winners with the rest of the field determined by the average finish in each stage, putting Larson and Johnson up front behind Keselowski, who was out of tires after NASCAR determined they have already used their "option"tires during the previous caution.

So the final 10-lap shootout for a million dollars went green with Keselowski trying to hold off Johnson, Larson and Kyle Busch with 20-lap-old tires on his car

With Keselowski on 20-lap-old tires on his car, he was dead meat as soon as the green flag waved for the final 10-lap shootout as Kyle Busch dived to the inside right at the start/finish line and took Keselowski three-wide with Johnson up top and had the lead as the field entered turn one. Johnson got around Keselowski on the outside to move into second with Larson following in third.

Busch steadily increased his lead over the next ten laps and went unchallenged to the finish for the million dollar prize.

Larson caught up to Jimmie Johnson on the final lap and took second place with a beautifully timed slide job, but was hardly satisfied with the runner-up finish.

"I saw an interview (Sprint Car driver) Donny Schatz did last night. They said, Oh, second is good. But, no, he said second sucks ass. Today it sucks ass," said Larson. "Had a lot of speed. Restarted fifth. Was able to get by Jimmie there that last lap, get to second. I thought that we had a great shot at winning the All-Star Race, but didn't work out that way."

While the NASCAR had hoped the softer-compound tires would have a strategic element to the race, no one chose to take the tire in the final segment, and only Johnson was able to show any advantage in using them, leading most teams to decide to use them early in the race.

"It's really a numbers game," said Johnson. "I think all the crew chiefs, especially Chad (Knaus), noticed, this is all just speculation, but there were three cars that started on the greens. If they marched their way up to the front, it would have been real easy for everybody to wait.

"Because starting in the back on greens for a 10-lap shootout, there's no way. So they watched the progression of that. Then I think we were on the aggressive side and put ours on. We went from fourth to second. We made up two spots. So as everybody looked at that and that you could only get a couple spots out of it, I think it was pretty easy for teams to decide to put them on in the third and worry about track position for that fourth segment."

Race winner Kyle Busch agreed that the softer tires weren’t as much of as advantage as everyone had hoped.

"It seemed like as the nighttime kind of progressed there, the tires equalized more than maybe some would have hoped for. But it was just a guess,"said Busch. "We ran both (tires) in practice. We saw a little bit of speed difference, but probably not as much as what the advertised split was going to be."