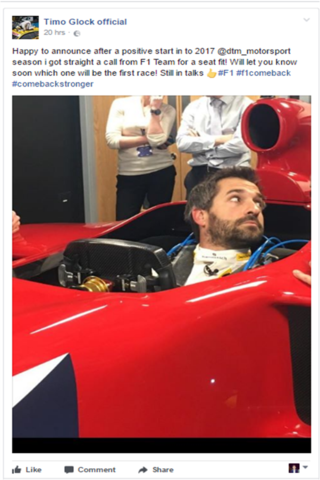 UPDATE This rumor is now 'false'. Timo Glock has admitted that hinting he is set to return to formula one was a "joke".

The German contested almost 100 grands prix for Jordan, Toyota and Marussia, but since 2013 has been a works BMW driver in the German touring car series DTM.

This week, some reporters became excited when the 35-year-old wrote on social media that he did a seat fitting with a F1 team.

"Will let you know soon which will be the first race!" Glock added as the caption to a photo depicting him sitting in a single seater-style cockpit.

But it quickly emerged that Glock was actually not doing a F1 seat fitting, but simply at the wheel of a single seater simulator.

He told German media that his social media post had simply been a "bit of a joke".

"I will not replace anyone anywhere," Glock clarified.

"This took off like a rocket! Lots of fans saw it's not a seat fit. I am the happiest guy being able to drive DTM for BMW with such a great partner like Deutsche Post, so don't worry."

05/09/17 Looks like Timo Glock may land a seat in F1. Glock has driven in F1 in the past for Jordan, Toyota, Virgin and Marussia.

The question is, for what team and will it be a test role, a reserve role, or a race seat? Could it be the Haas team is looking to lose a driver, or even a premature replacement should Fernando finally loose patience? Could Jolyon Palmer get the ax?

We will have to wait and see…