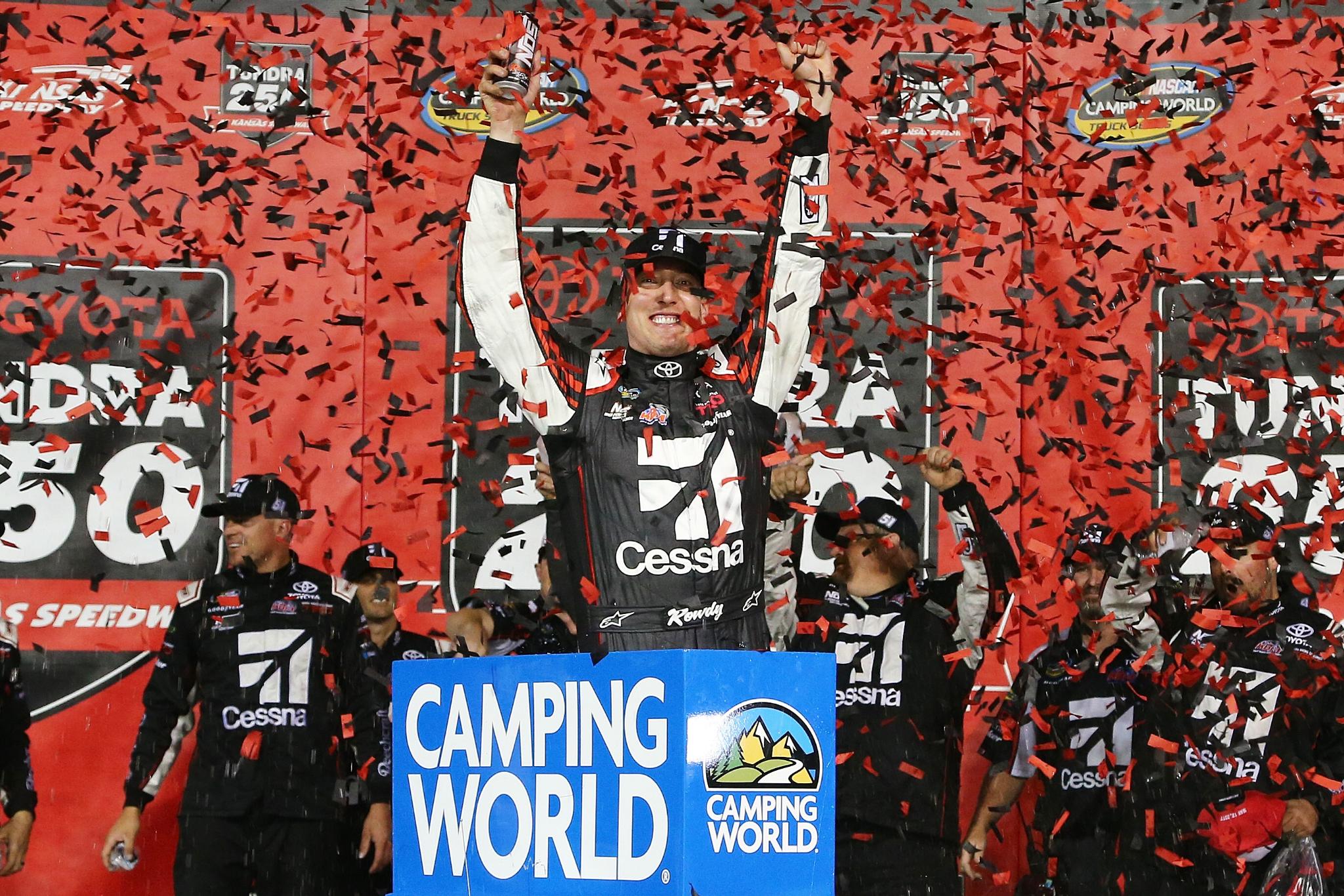 He didn't do his customary bow after notching his 47th victory in the NASCAR Camping World Truck Series.

Heartbreak for Ben Rhodes, who was leading by more than a second when his engine expired with eight laps left, provided the stroke of serendipity that launched Busch into Victory Lane.

And Busch knew it.

"That's one of the worst ones to swallow right there, for sure," Busch said of Rhodes' misfortune. "I didn't do a burnout or nothing like that. I just got the checkered flag for our group of guys at Kyle Busch Motorsports.

"Ben Rhodes had that race won. That one was his. I tried everything I could to try to chase him back down. I just didn't have enough speed in our Tundra tonight-it was fast, but his was a little bit faster than ours."

[adinserter name="GOOGLE AD"] Busch won for the second time at Kansas, having also triumphed in his most recent previous start at the speedway in 2014.

Three laps after a restart on Lap 139 of 167, Rhodes won a sustained side-by-side battle against Busch and pulled ahead. Rhodes stretched the advantage to as much as 1.4 seconds before a piece of debris shot through the grille of his No. 27 Toyota and torpedoed the engine.

Rhodes, who was driving a chassis built by Kyle Busch's Rowdy Manufacturing with a body made by KBM, took his truck to the garage and retired in 23rd place.

"We ran with the best tonight," a chagrined Rhodes said after the race. "Our Safelite Tundra had speed all night long. We did everything right, but Ben Rhodes has a curse on his back or something, because something always goes wrong.

"A piece of debris went through the grille into the radiator and blew up the motor… It's just crazy that something always goes wrong with our (ThorSport) team. We do everything right-we just can't pull one off. We've been trying for years and years."

Rhodes, of course, is only 20 years old and has just 31 career starts in the Truck Series.

Johnny Sauter ran second and retained the series lead by two points over polesitter Christopher Bell, who was trapped a lap down after pitting on Lap 123 when the 10th caution of the race on Lap 127 interrupted the pit sequence.

Busch had just left pit road when the yellow flag flew. The caution kept him on the lead lap, and he cycled back into the lead when the rest of the contenders came to pit road on Lap 128.

But Busch lost the top spot to Rhodes after the 11th caution for Matt Crafton's spin through the infield grass, and Rhodes pulled away while Busch and third-place finisher John Hunter Nemechek were battling for second place.